Pulmonary function tests are a group of procedures that measure the function of the lungs, revealing problems in the way a patient breathes. The tests can determine the cause of shortness of breath and may help confirm lung diseases, such as asthma, bronchitis or emphysema. The tests also are performed before any major lung surgery to make sure the person won't be disabled by having a reduced lung capacity.

Pulmonary function tests can help a doctor diagnose a range of respiratory diseases which might not otherwise be obvious to the doctor or the patient. The tests are important since many kinds of lung problems can be successfully treated if detected early.
The tests are also used to measure how a lung disease is progressing, and how serious the lung disease has become. Pulmonary function tests also can be used to assess how a patient is responding to different treatments.
One of the most common of the pulmonary function tests is spirometry (from the Greco-Latin term meaning "to measure breathing"). This test, which can be given in a hospital or doctor's office, measures how much and how fast the air is moving in and out of the lungs. Specific measurements taken during the test include the volume of air from start to finish, the fastest flow that is achieved, and the volume of air exhaled in the first second of the test.
A peak flow meter can determine how much a patient's airways have narrowed. A test of blood gases is a measurement of the concentration of oxygen and carbon dioxide in the blood, which shows how efficient the gas exchange is in the lungs.
Another lung function test reveals how efficient the lungs are in absorbing gas from the blood. This is measured by testing the volume of carbon monoxide a person breathes out after a known volume of the gas has been inhaled.

Pulmonary function tests shouldn't be given to patients who have had a recent heart attack, or who have certain other types of heart disease. It is crucial that the patient cooperate with the health care team if accurate results are to be obtained.

The patient places a clip over the nose and breathes through the mouth into a tube connected to a machine known as a spirometer. First the patient breathes in deeply, and then exhales as quickly and forcefully as possible into the tube. The exhale must last at least six seconds for the machine to work properly. Usually the patient repeats this test three times, and the best of the three results is considered to be the measure of the lung function. The results will help a doctor figure out which type of treatment to pursue.

The patient should not eat a heavy meal before the test, nor smoke for four to six hours beforehand. The patient's doctor will issue specific instructions about whether or not to use specific medications, including bronchodilators or inhalers, before the test. Sometimes, medication may be administered as part of the test.

The risk is minimal for most people, although the test carries a slight risk of a collapsed lung in some patients with lung disease.

Abnormal results mean that the person's lung capacity is less than 80% of the predicted value. Such findings usually mean that there is some degree of chest or lung disease.

Emphysema — A disease in which the small air sacs in the lungs become damaged, causing shortness of breath. In severe cases it can lead to respiratory or heart failure.
Gale Encyclopedia of Medicine. Copyright 2008 The Gale Group, Inc. All rights reserved.

an assessment of the respiratory system that provides information about ventilation, airflow, lung volumes and capacity, and the diffusion of gas incorporating spirometry, peak flow meters, and the body plethysmograph.
Farlex Partner Medical Dictionary © Farlex 2012

(PFT) (pul'mŏ-nar-ē funk'shŭn test)
An assessment of the respiratory system that provides information about ventilation, airflow, lung volumes and capacity, and the diffusion of gas incorporating spirometry, peak flow meters, and body plethysmograph.
Medical Dictionary for the Health Professions and Nursing © Farlex 2012 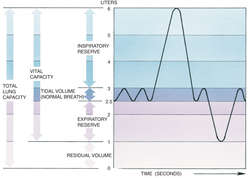 One of several different tests used to evaluate the condition of the respiratory system. Measures of expiratory flow and lung volumes and capacities are obtained. The forced vital capacity is one of the more important pulmonary function tests; it provides a measure of the amount of air that can be maximally exhaled after a maximum inspiration and the time required for that expiration. Pulmonary function tests can also determine the diffusion ability of the alveolar-capillary membrane.
See: illustrationillustration
Medical Dictionary, © 2009 Farlex and Partners

Feedback
Flashcards & Bookmarks ?
Please log in or register to use Flashcards and Bookmarks. You can also log in with
Flashcards ?
My bookmarks ?
+ Add current page to bookmarks
Mentioned in ?
References in periodicals archive ?
The study population included 100 subjects referred by the doctors of the hospital, for the pulmonary function test, from which the subjects were selected by convenience sampling, according to the selection criteria.
Comparison of pulmonary function among smokers and non-smokers--a retrospective study
All tests were conducted after the subjects were made to sit comfortably in a chair for 15 minutes and the pulmonary function tests were done for all the subjects in the morning between 10 am to 12 noon in the Pulmonary Function Laboratory at KVG Medical College and Hospital, Sullia.
Study of pulmonary function test in allergic rhinitis patients of Sullia, Dakshina Kannada
of Cases (n=4100) % 18-20 615 15% 21-25 1640 40% 26-30 1230 30% 31-35 410 10% 36-40 205 5% >40 0 0% Table II: Pulmonary Function Test Derangement Test Parameter No.
A study of breathlessness in pregnant females in a rural setup
Dudhmal et al., [22] studied pulmonary function tests in 30 saw mill workers.
Influence of sawdust on peak expiratory flow rate in sawmill workers of central India working in unprotected environment and its correlation with duration of exposure
An attempt is made to study the variations in pulmonary function tests in the above study population.
Effect of physical training on lung function in healthy young adults
Table 1: Pulmonary function test parameter levels (mean [+ or -] SD, n = 55) at three different phases of menstrual cycle in undergraduate female medical students Parameters Menstrual phase Proliferative phase FVC (L) 2.74 [+ or -] 0.43 3.02 [+ or -] 0.45 FEV1 (L) 2.42 [+ or -] 0.89 2.78 [+ or -] 0.48 PEFR (L/s) 5.81 [+ or -] 1.25 6.69 [+ or -] 0.67 FEV1/FVC (%) 91.39 [+ or -] 8.00 94.83 [+ or -] 6.66 Parameters Secretory phase F (2,162 DF) p FVC (L) 3.09 [+ or -] 0.49 8.81 <0.001 FEV1 (L) 2.89 [+ or -] 0.53 7.61 0.001 PEFR (L/s) 6.54 [+ or -] 1.26 10.13 <0.001 FEV1/FVC (%) 92.57 [+ or -] 5.10 3.74 0.026 Table 2: For each parameter, comparison (p value) of mean difference between the groups by Tukey's test Comparisons FVC FEV1 PEFR FEV1/FVC Menstrual phase vs.
Variation in pulmonary function tests parameters in different phases of menstrual cycle in healthy female medical students
Pulmonary Function Test (PFT): PFT has been performed on jaeger PFT machine with body box in Department of Respiratory Medicine of Sri Aurobindo Medical College and Post Graduate Institute, Indore MP by qualified PFT technician with assistance of physiologist and reported in consent with pulmonologist.
Co-relation of six minute walk test with pulmonary function tests in obese individuals admitted for bariatric surgery
[5] Pulmonary function test (PFT) abnormalities in RA can be restrictive (19-44%) if there is pleural or parenchymal involvement, or obstructive (16-38%) if there is obliterated bronchiolitis, bronchiectasis or cricoarytenoid arthritis.
A COMPARATIVE STUDY OF PULMONARY FUNCTION TEST ABNORMALITIES IN RHEUMATOID ARTHRITIS-TREATMENT NAIVE VERSUS PATIENTS ON TREATMENT
Perioperative functional evaluation comprised the pulmonary function test, stair-climbing test, and 6MWD.
Association between Pulmonary Function and Stair-Climbing Test Results after Lung Resection: A Pilot Study
Pulmonary function test revealed small airway obstruction, which showed forced vital capacity (FVC) of 1.73 L (88.7% of predicted), forced expiratory volume in 1 second (FEV1) of 1.20 L (109.0% of predicted), FEV1/FVC of 69.3%, V50 of 1.04L/sec, V25 of 0.21 L/sec, and V50/V25 of 4.95.
Sjogren Syndrome Complicated with Cystic Lung Disease and Pulmonary Amyloidosis
Participants with clinically significant respiratory disease (asthma, chronic obstructive or restrictive pulmonary disease), anormal pulmonary function test results before CA (FVC% < 80%, FEV1 < 80%, FEV1/FVC < 75%), cardiovascular disease (myocardial infarction, previous coronary intervention or surgery, and peripheral arterial disease), renal insufficiency (estimated glomerular filtration rate <60 ml/min), and previous allergic reactions to contrast-agent exposure were not enrolled in the study.
Effects of Iodixanol on Respiratory Functions during Coronary Angiography and the Role of Body Composition
Objective: To predict pulmonary function test values in children.
Predictors of pulmonary function test values for Pakistani children, aged 5-14 years