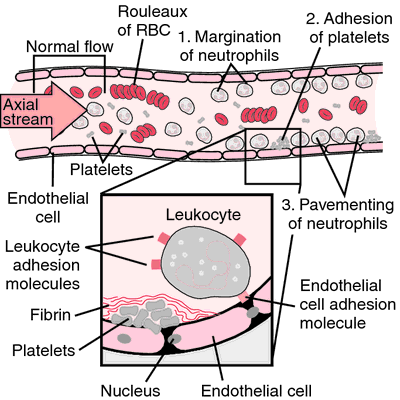 an inflammatory reaction in which the distinguishing feature is an actual increase in the number of tissue cells, especially the reticuloendothelial macrophages, in contrast to cells exuded from blood vessels; in addition, exudates of various types are likely to be observed in granulomas and other forms of proliferative inflammation, but the latter may occur without an exudate being formed (as in certain infections caused by virus).
Synonym(s): hyperplastic inflammation
Farlex Partner Medical Dictionary © Farlex 2012

(prō-lif'ĕr-ă-tiv in'flă-mā'shŭn)
An inflammatory reaction in which the distinguishing feature is an increase in the number of tissue cells, especially the reticuloendothelial macrophages, rather than of cells exuded from blood vessels.
Synonym(s): hyperplastic inflammation.
Medical Dictionary for the Health Professions and Nursing © Farlex 2012

(in?fla-ma'shon) [L. inflammare, to kindle]
An immunological defense against injury, infection, or allergy, marked by increases in regional blood flow, immigration of white blood cells, and release of chemical toxins. Inflammation is one way the body uses to protect itself from invasion by foreign organisms and to repair wounds to tissue. Clinical hallmarks of inflammation are redness, heat, swelling, pain, and loss of function of a body part. Systemically, inflammation may produce fevers, joint and muscle pains, organ dysfunction, and malaise. Synonym: inflammatory response See: table; autoimmune disease; infection

Local inflammatory responses begin when traumatized or infected tissues activate the humoral and cellular immune systems. Complement proteins and cytokines are manufactured. These signaling proteins start a cascade of chemical events that result in increases in local blood flow and the attraction of white blood cells to the damaged tissue. White blood cells in turn consume foreign or injured cells and release arachidonic acid metabolites, kinins, histamines, and more complement, thereby amplifying and perpetuating the immune response. The white blood cells also release toxic oxygen radicals, nitric oxide, and tissue-destroying enzymes in an attempt to kill any invading microorganisms. In healthy people, the process continues until all damaged tissues or invading pathogens are removed (usually about 5 days); an inpouring of fibroblasts, which repair the injury and form a healed scar, follows.

Systemic inflammatory responses occur when foreign proteins are recognized, e.g., in the bloodstream, and immune complexes are formed or cytotoxic T cells are activated. If sepsis triggers the immune response, these agents may help clear microorganisms from the blood.

Autoimmune illnesses occur when the chemical and cellular tools of inflammation are directed against the body's own tissues.

Mild inflammation (such as the inflammatory change from minor injuries) often resolves with the topical application of ice packs or cold water. Nonsteroidal anti-inflammatory drugs (such as ibuprofen) and steroids (such as prednisone) are useful in managing more severe inflammation, as are many disease-modifying antirheumatic drugs, such as methotrexate or azathioprine.

The early response to tissue injury, marked by the influx of white blood cells and inflammatory mediators into damaged tissues. Most of the response takes place in 12 to 24 hr.

Inflammation of the serous membrane, enhancing the likelihood of attachments.

Inflammation that persists weeks to months after tissue damage. Its pathological hallmarks include simultaneous tissue repair and destruction.

Inflammation in which the fluid leaving the capillaries is rich in plasma proteins.

Inflammation in which the exudate is rich in fibrin.

Inflammation involving principally the noncellular or supporting elements of an organ.

An infrequently used term for any inflammatory process in which there is marked cellular proliferation, e.g., in proliferative retinopathy.

Inflammation in which a shelf of fibrin and white blood cell debris forms on an epithelial lining, usually from a toxin that necroses tissue. This type of inflammation is most often seen in colitis caused by Clostridium difficile. Before there were vaccinations against diphtheria, this inflammation was frequently found in the oral cavities of those infected with that pathogen.

Inflammation in which pus is formed. Synonym: suppurative inflammation

Inflammation without pus or other inflammatory exudates.

Mild inflammation with minimal signs and symptoms. It may become chronic and gradually damage tissues.

The formation of an ulcer over an inflamed area.
Medical Dictionary, © 2009 Farlex and Partners