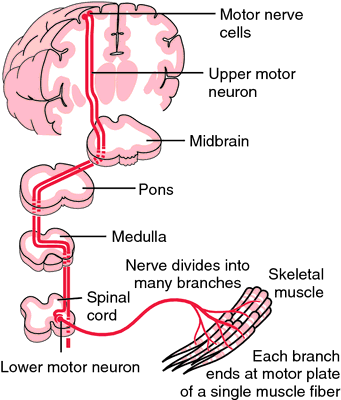 Upper and lower motor neurons. From Damjanov, 2000.
Golgi n's
1. (type I): pyramidal cells with long axons, which leave the gray matter of the central nervous system, traverse the white matter, and terminate in the periphery.
2. (type II): stellate neurons with short axons in the cerebral and cerebellar cortices and in the retina.
motor neuron motoneuron.
postganglionic n's neurons whose cell bodies lie in the autonomic ganglia and whose purpose is to relay impulses beyond the ganglia.
preganglionic n's neurons whose cell bodies lie in the central nervous system and whose efferent fibers terminate in the autonomic ganglia.
Miller-Keane Encyclopedia and Dictionary of Medicine, Nursing, and Allied Health, Seventh Edition. © 2003 by Saunders, an imprint of Elsevier, Inc. All rights reserved.

(no͝or′ŏn′, nyo͝or′-)
n.
1. Any of the impulse-conducting cells that constitute the brain, spinal column, and nerves in vertebrates, consisting of a nucleated cell body with one or more dendrites and a single axon.
2. A similar impulse-conducting cell in invertebrates. In both senses also called nerve cell.
neu′ro·nal (no͝or′ə-nəl, nyo͝or′-, no͝o-rōn′l, nyo͝o-), neu·ron′ic adj.
neu′ro·nal·ly adv.
The American Heritage® Medical Dictionary Copyright © 2007, 2004 by Houghton Mifflin Company. Published by Houghton Mifflin Company. All rights reserved.

(nūr'on) [TA]
The morphologic and functional unit of the nervous system, consisting of the nerve cell body with its dendrites and axon.
Synonym(s): neurocyte, neurone.
[G. neuron, a nerve]
Medical Dictionary for the Health Professions and Nursing © Farlex 2012 A motor neuron (actually an interneuron) found completely within the central nervous system that synapses with or regulates the actions of lower motor neurons in the spinal cord and cranial nerves. Lesions of these neurons produce spastic paralysis in the muscles they innervate. Synonym: upper motoneuron
Medical Dictionary, © 2009 Farlex and Partners

The cells within the body which make up the nervous system, specifically those along which information travels.
Mentioned in: Coma, Pain
Gale Encyclopedia of Medicine. Copyright 2008 The Gale Group, Inc. All rights reserved.

Structural unit of the nervous system consisting of the nerve cell body and its various processes, the dendrites, the axon and the ending (also called bouton, end foot or axon terminal). There are many types of neurons within the nervous system; some transmit afferent nerve impulses to the brain (e.g. those carrying information from the photoreceptors to the visual cortex), or to the spinal cord (e.g. those carrying information from the receptors in the skin to the spinal cord). They are called sensory neurons. Others transmit efferent motor nerve impulses to a muscle (e.g. those carrying information from the Edinger-Westphal nucleus to the sphincter pupillae and ciliary muscles). These are called motor neurons. Other neurons carry nerve impulses from one neuron to another (internuncial neurons). Note: also spelt neurone. See action potential; synapse.
Millodot: Dictionary of Optometry and Visual Science, 7th edition. © 2009 Butterworth-Heinemann