[noo″mo-nek´to-me]
excision of lung tissue, of an entire lung (total pneumonectomy) or less (partial pneumonectomy), or of a single lobe (lobectomy).
Patient Care. Pneumonectomy is most often done as a treatment for lung cancer; it is also done with less common diseases such as extensive unilateral tuberculosis, bronchiectasis, and multiple abscesses of the lung. Thus patients who have a pneumonectomy are likely to have suffered some chronic and debilitating illness prior to surgery and will have special needs to avoid complications and promote healing and recovery.

After surgical removal of a lung, the chest is closed and there is no closed drainage of the thoracic cavity. Instead, pressure within the pleural space is adjusted by using a simple thoracentesis and manometer, which help maintain the mediastinum midline. Fluid and air are allowed to accumulate in the space left by the excised lung to prevent shift of the mediastinum to the operative side. A second reason for not inserting a chest tube and drainage is the danger of contamination and possible empyema.

The patient is not allowed to lie on the operative side. If the operative lung is permitted to be dependent, fluid can enter the space, causing tension pneumothorax secondary to mediastinal shift; should the bronchial stump rupture, drowning in the accumulated fluid could occur.

Fluid balance is watched closely by pressure monitoring to avoid overhydrating the patient. A central venous line or Swan-Ganz catheter may be used to guide fluid replacement. Serial blood gases and chest x-rays are done to detect early signs of respiratory complications. Additionally, blood tests are done and electrolyte levels are evaluated to detect problems of infection and imbalance.

The most common postoperative complication is respiratory insufficiency, especially in patients who have had poor pulmonary function before surgery. Signs of respiratory problems include a change in mental status related to hypoxia, fever, tachycardia, and tachypnea. Pain is managed with analgesics on a routine basis. In addition to providing comfort and rest for the patient, analgesics allow the patient to move more freely and cough up accumulated secretions more effectively. Pulmonary hygiene is a vital component of postoperative care as it helps the remaining lung increase its vital capacity and total lung capacity and avoid atelectasis.

In patients who are over 60 years of age or have a preexisting cardiac disease, there is the possibility that cardiac arrhythmias can develop. Pain, hypoxemia, hypovolemia, and acid-base imbalance can contribute to this complication. A fistula between the bronchus and pleura sometimes occurs, leading to subcutaneous emphysema and mediastinal shift caused by a massive air leak. If the fistula is evident on the first or second postoperative day, it is probably due to a slipped ligature on the bronchial stump. An air leak that occurs later, on the fifth to tenth postoperative day, is probably due to an infection and poor wound healing. A ruptured bronchial stump must be repaired surgically as soon as possible. Signs that a stump has ruptured include dyspnea, change in mental status, and expectoration of serosanguineous fluid.

Hemorrhage, usually due to a slipped ligature on a major artery, is a relatively rare complication, but when it occurs it can be fatal. The patient rapidly goes into profound shock from circulatory collapse. This complication must be detected early and corrected promptly.

Patients recovering from pneumonectomy require intensive care to avoid the life-threatening complications listed above. Central pressure monitoring, continuous cardiac monitoring, serial laboratory testing of arterial blood gases and electrolyte levels, and frequent periodic checking of vital signs are all necessary either to avoid or to detect and manage these complications in their earliest stages. Additionally, expert care by each member of an interdisciplinary team is necessary to assure an uneventful recovery and restoration of patients to their former daily activities. 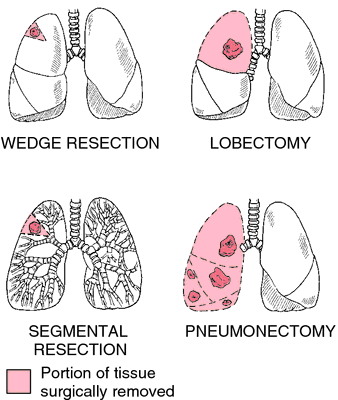 Pneumonectomy. From Polaski and Tatro, 1996.
Miller-Keane Encyclopedia and Dictionary of Medicine, Nursing, and Allied Health, Seventh Edition. © 2003 by Saunders, an imprint of Elsevier, Inc. All rights reserved.

Surgery The excision of an entire lung
McGraw-Hill Concise Dictionary of Modern Medicine. © 2002 by The McGraw-Hill Companies, Inc.

(nū'mō-nek'tŏ-mē)
Removal of all pulmonary lobes from a lung in one operation.
[G. pneumōn, lung, + ektomē, excision]
Medical Dictionary for the Health Professions and Nursing © Farlex 2012

Surgical removal of a lung. This is sometimes done to treat cancer limited to one lung.
Collins Dictionary of Medicine © Robert M. Youngson 2004, 2005

Feedback
Flashcards & Bookmarks ?
Please log in or register to use Flashcards and Bookmarks. You can also log in with
Flashcards ?
My bookmarks ?
+ Add current page to bookmarks
Mentioned in ?
References in periodicals archive ?
In this study of patients who underwent pneumonectomy for primary lung cancer, we observed that a large [V.sub.T] and high [P.sub.aw] during OLV were independently associated with the development of post-pneumonectomy ALI/ARDS.
Risk factors for post-pneumonectomy acute lung injury/acute respiratory distress syndrome in primary lung cancer patients
As shown in Table 2, the contributing causes of death were emphysema in 30 cases, infection in 24 cases, organ failure in 23 cases, pneumonectomy or lobectomy in 16 cases, pulmonary edema in 15 cases, pulmonary thromboembolism in 12 cases, and various other conditions.
Causes of death of patients with lung cancer
Although pneumonectomy specimens allow assessment of tumor involvement of a main bronchus, determining the distance to the carina, which is necessary to accurately assign a T category for centrally located tumors, typically requires consultation with the surgeon, bronchoscopist, or radiologist.
Protocol for the examination of specimens from patients with primary non-small cell carcinoma, small cell carcinoma, or carcinoid tumor of the lung
Because the nature of the material available for review varied greatly, from fine-needle aspiration specimens to a pneumonectomy, and did not always include the entire tumor, there are limitations in the histologic classifications in this study group.
Morphologic features of adenocarcinoma of the lung predictive of response to the epidermal growth factor receptor kinase inhibitors erlotinib and gefitinib
Risk and protective factors for major complications after pneumonectomy for lung cancer.
Predict fluid responsiveness by stroke volume variation in patients undergoing protective one-lung ventilation in pressure-controlled ventilation mode
However, it has been reported that the new PTX-3 biomarker was significantly increased in inflammation due to lung cancer, and in inflammatory diseases.16-19 In our study, posterolateral thoracotomy was performed in 11 patients due to lung cancer, intrapericardial pneumonectomy in two patients, sleeve lobectomy in one patient, bilobectomy in one patient, and lobectomy in seven patients; lymph node dissection was performed in all patients.
Pentraxin-3 and inflammatory biomarkers related to posterolateral thoracotomy in Thoracic Surgery
Comorbidities in the 200 participants (mean (standard deviation, SD) age 42.2 (21.3) years, n=83 males) included asthma (n=74), COPD (n=30), post-tuberculosis structural lung disease (n=18), bronchiectasis (n=14), lung masses (n=12), sarcoidosis (n=11), tuberculosis (n=6), interstitial lung disease (n=5), pulmonary hypertension (n=3), pleural effusions (n=3), pneumoconiosis (n=3) and previous pneumonectomy (n=2).
The utility of hand-held mobile spirometer technology in a resource-constrained setting
The incidence of these artifacts organized by specimen type (eg, wedge resection, lobectomy, pneumonectomy) is presented in Table 3.
Feasibility of Perioperative Micro-Computed Tomography of Human Lung Cancer Specimens: A Pilot Study
These multimodality strategies were to perform extrapleural pneumonectomy (EPP), adjuvant hemithoracic irradiation (high dose or intensity.modulated radiation treatment [IMRT]) and chemotherapy or to perform pleurectomy and decortication (P/D), chemotherapy, and prophylactic irradiation to the incisions.
The relationship between treatment cost and prognosis of malignant pleural mesothelioma in Turkey
Pedunculated tumors can be safely resected with a wedge resection of the lung, but large sessile tumors often require lobectomy or pneumonectomy. Surgical resection, however, is often complicated by the extensive bronchial and systemic arterial supply.
Giant solitary fibrous tumor of the pleura
These include left pneumonectomy, left lung transplant, left sleeve resection, descending thoracic aortic aneurysm, external or intraluminal tumor resection and left lung transplantation3.
COMPARISON OF CLINICAL EFFICACY OF RIGHT VERSUS LEFT SIDED DOUBLE LUMEN ENDOBRONCHIAL TUBE IN CONJUNCTION WITH FIBEROPTIC BRONCHOSCOPE
Lobectomy was performed in 81 (59.6%) cases, pneumonectomy in 44 (32.4%) cases, wedge resection in 7 (5.1%) cases, and mediastinal lymph node sampling concomitant with bilobectomy in 4 (2.9%) cases with NSCLC diagnosis.
Comparison of the Effects of the Sixth and Seventh TNM Staging on Survival in Operable Non-Small Cell Lung Cancer