[fag″o-si-to´sis]
the engulfing of microorganisms or other cells and foreign particles by phagocytes. adj., adj phagocytot´ic. 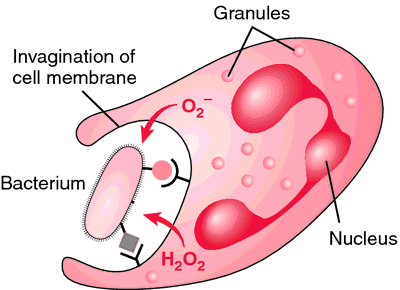 Phagocytosis. From Damjanov, 2000.
Miller-Keane Encyclopedia and Dictionary of Medicine, Nursing, and Allied Health, Seventh Edition. © 2003 by Saunders, an imprint of Elsevier, Inc. All rights reserved. 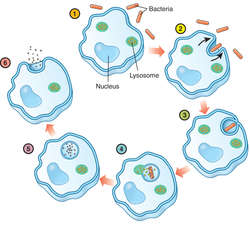 PHAGOCYTOSIS
A three-stage process by which phagocytes (neutrophils, monocytes, and macrophages) engulf and destroy microorganisms, other foreign antigens, and cell debris. Generally, these substances must be covered with opsonins, such as antibodies or complement, to initiate binding with cell receptors on the phagocytes, the first stage in phagocytosis. In the second stage, the particle is engulfed and enclosed in a vacuole (phagosome). During the third stage, the phagosome merges with lysosomes whose enzymes destroy the engulfed particle. See: illustration; defensin; lysozyme; macrophage; neutrophil; oxygen radical

Most bacteria are killed during phagocytosis by oxygen radicals, which are formed during the respiratory burst when phagosomes and lysosomes merge. When oxygen radical production is excessive, tissue damage occurs. Lysozymes, defensins, and bacteriocidal permeability-increasing (BPI) protein also destroy bacteria and other organisms; their actions do not depend on the generation of oxygen radicals.

Phagocytosis that is stimulated by the presence of opsonins such as antibodies.

Phagocytosis that occurs in the absence of opsonins.
Medical Dictionary, © 2009 Farlex and Partners

The envelopment and destruction of bacteria or other foreign bodies by PHAGOCYTES.
Collins Dictionary of Medicine © Robert M. Youngson 2004, 2005

the ingestion of materials (subcellular particles, cells) from the outside of a cell into its interior, forming a cytoplasmic vacuole.
Collins Dictionary of Biology, 3rd ed. © W. G. Hale, V. A. Saunders, J. P. Margham 2005

A process by which a white blood cell envelopes and digests debris and microorganisms to remove them from the blood.
Mentioned in: Legionnaires' Disease, White Blood Cell Count and Differential
Gale Encyclopedia of Medicine. Copyright 2008 The Gale Group, Inc. All rights reserved.

The process of ingestion of solid substances (e.g. cells, bacteria, parts of necrosed tissue) by cells and transported to a site within the cell where it is broken down by lysosomal enzymes.
Millodot: Dictionary of Optometry and Visual Science, 7th edition. © 2009 Butterworth-Heinemann

Feedback
Flashcards & Bookmarks ?
Please log in or register to use Flashcards and Bookmarks. You can also log in with
Flashcards ?
My bookmarks ?
+ Add current page to bookmarks
Mentioned in ?
References in periodicals archive ?
Phagocytosis of spermatozoa and of residual bodies discarded by maturing spermatids has been described in detail for NPs in Anthocidaris crassispina (Reunov et al., 2004a, b).
Nutritive phagocyte incubation chambers provide a structural and nutritive microenvironment for germ cells of Strongylocentrotus droebachiensis, the green sea urchin
Fluorescence Microscopy for Quantification of Phagocytosis. RAW264.7 cells were plated onto 12 or 24 well plates and pretreated for 8 hrs with fisetin (20 [micro]M), CSE (5%), chloroquine (10 [micro]M), and CFTR(inh)-172 (inhibitor; 10 [micro]M) or transfected for 24 hrs with TFEB-Mission[TM] shRNA.
Cigarette Smoke Exposure Inhibits Bacterial Killing via TFEB-Mediated Autophagy Impairment and Resulting Phagocytosis Defect
To clarify whether the CD47-SIRP[alpha] signal contributes to the immune evasion mediated by TAMs, we perform a phagocytosis assay in vitro and establish the xenograft EC model to test the antitumor activity of CD47 blockade therapy.
CD47 Blockade Inhibits Tumor Progression through Promoting Phagocytosis of Tumor Cells by M2 Polarized Macrophages in Endometrial Cancer
Here, we provide the first comprehensive analysis of MMP-13 involvement in the biology of DC and the functional changes resulting from the inhibition of MMP-13, including DC maturation, apoptosis, and phagocytosis.
Effect of Matrix Metallopeptidase 13 on the Function of Mouse Bone Marrow-derived Dendritic Cells
This can be an advantageous mechanism for neoplastic cells over their normal counterparts, which allows the former to evade phagocytosis by cells of the innate immune system.
CD47 expression is decreased in hematopoietic progenitor cells in patients with myelofibrosis
Dex treatment enhanced phagocytic activity of DCs following aspergillus conidia infection, compared to the control group (phagocytosis rates: 91.0% [+ or -] 3.4% in Dex group; 67.1% [+ or -] 10.1% in the control group, t = 5.493, P = 0.001); whereas IFN-a did not enhance phagocytic activity of DCs following aspergillus conidia infection (phagocytosis rate in IFN-a group: 66.7% [+ or -] 5.9%, t = 0.084, P = 0.935).
Overexpression of Dendritic Cell-Specific Intercellular Adhesion Molecule-3-Grabbing Nonintegrin in Dendritic Cells Protecting against Aspergillosis
"Among the genes we saw altered were many involved in phagocytosis, which is the first time this has been shown," Feinstein said.
Does liquor impact development of Alzheimer's disease?
Influence of PLGA-PEG Percentage to Phagocytosis Hindrance Capability.
Thin-Shelled PEGylated Perfluorooctyl Bromide Nanocapsules for Tumor-Targeted Ultrasound Contrast Agent
The neutrophil-tumor cell emperipolesis, entosis, and/or phagocytosis (cannibalism) may be a spectrum of the cell-in-cell phenomenon.
Significant Neutrophilic Emperipolesis in Squamous Cell Carcinoma
When macrophages encounter maresins, they increase phagocytosis and efferocytosis, resulting in the removal of microbes.
Maresins: Specialized Proresolving Lipid Mediators and Their Potential Role in Inflammatory-Related Diseases
Similar to AMs, several density-defined populations have been identified exhibiting differential prostaglandin secretion, migration, and phagocytosis capabilities [51-53].
Dysregulated Functions of Lung Macrophage Populations in COPD
There was reduction in phagocytosis percentage of macrophages with increase in dose.
EFFECT OF COLCHICINE ON CELLULAR IMMUNE RESPONSES IN MICE