[pĕ-rim´ĕ-ter]
1. the boundary of a two-dimensional figure.
2. an apparatus for determining the extent of the peripheral visual field.
Miller-Keane Encyclopedia and Dictionary of Medicine, Nursing, and Allied Health, Seventh Edition. © 2003 by Saunders, an imprint of Elsevier, Inc. All rights reserved.

(pĕ-rim'ĕ-tĕr)
1. A circumference, edge, or border.
2. An instrument, usually half a circle or sphere, used to measure the field of vision.
[G. perimetros, circumference, fr. peri, around, + metron, measure]
Medical Dictionary for the Health Professions and Nursing © Farlex 2012

An instrument for measuring the angular extent and the characteristics (e.g. presence of scotoma) of the visual field. See campimeter; visual field; isopter; tangent screen.
arc perimeter Perimeter consisting of a semicircular arc, the inside surface of which is painted matt black or grey. The patient's head is placed such that the eye under investigation is located at the centre of curvature of the arc. The visual field is determined by moving a target along the black surface of the perimeter until the patient either just sees it or just no longer sees it. The targets are small discs of varying colour and size attached to the end of black wands or may be projected on the arc, which can be rotated around the fixation point located at its centre. Thus the visual field can be tested along any meridian.
automated perimeter An instrument to test the visual field in which the presentation of the stimuli and the recording are carried out electronically and under the control of a built-in computer. There exist many types (e.g. Henson CFA, Humphrey Field Analyzer, Octopus, Dicon). Computerized perimeters have the following advantages: the examination strategy is reproducible; they can be operated by non-specialists; the testing routine (e.g. number of stimuli or their location) can be altered by modifying the program; each instrument can contain several examination routines aimed at testing various pathologies (e.g. one for glaucoma and another for hemianopic defects); the computer capacity can be used for quantifying the results as, for example, in the Henson CFA where the visual fields can be classified as normal, suspect or defective on the basis of a system included in the instrument (Fig. P7). Syn. computerized perimetry. See Swedish Interactive Thresholding Algorithm; frequency doubling perimetry; short wavelength automated perimetry; Esterman test.
bowl perimeter See Goldmann perimeter.
Goldmann perimeter Perimeter consisting of a hemispherical bowl, the inside radius of which is 30 cm. Targets of varying intensity and size are projected onto the inside white surface. The background luminance of the bowl is also controlled. In addition there is a telescope attached to the back of the bowl through which the practitioner can verify that the patient maintains fixation. Goldmann perimeter can be used either for kinetic or static perimetry, although it is more appropriately designed for the former. Syn. bowl perimeter. See kinetic perimetry; static perimetry.
projection perimeter A perimeter in which the target is projected either onto an arc or a bowl such as the Goldmann perimeter. 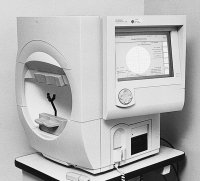 Feedback
Flashcards & Bookmarks ?
Please log in or register to use Flashcards and Bookmarks. You can also log in with
Flashcards ?
My bookmarks ?
+ Add current page to bookmarks
Mentioned in ?
References in periodicals archive ?
North America is anticipated to dominate the ophthalmic perimeters market during the forecast period owing to rising lifestyle and age-associated ophthalmic conditions such as glaucoma and cataract.
Ophthalmic Perimeters Market In-Depth Analysis On The Basis Of Product Type, Application, End Use, Region And Forecast From 2019 To 2026: Grand View Research Inc
These weave of systems and technologies is entirely dedicated to protect company assets inside the perimeter. The task is accomplished by blocking malicious physical invasion across the perimeter.
Perimeter Security Market Overview, Restraints, Current State Witnessing Dynamic Growth by 2025
The facility will serve patients of all ages and Perimeter plans to expand the 36-bed hospital to more than double its size.
Perimeter Healthcare Acquires Two Dallas-Fort Worth-Based Behavioural Hospitals
The OTIS[TM] platform leverages Perimeter's proprietary Wide-Field Optical Coherence Tomography Imaging technique to overcome this limitation, leading to rapid, intuitive imaging of the entire specimen.
Perimeter Medical Imaging, Inc. Announces 510(k) Clearance by FDA
By bolstering the technology deployed to keep our airport perimeter secure, we are taking steps to ensure the safety of businesses, travellers and employees and to help establish Mineta as the premier gateway to Silicon Valley."
PROBING THE PERIMETER: FROM GUNSHOT DETECTORS TO INTHUDER SENSORS, MIAMI AND SAN JOSE ARE LEADING THE WAY IN TESTING CUTTING EDGE AIRPORT SECURITY SYSTEMS. TOM ALLETT REPORTS
Built using CRON Smart Fusion technology, Kavach Z is an advanced all-weather, all-terrain intrusion detection product that provides complete situational awareness for any perimeter. Quanergy's LiDAR technology will provide Kavach Z with the ability to see ahead of the perimeter boundary.
CRON Systems, Global Giant Quanergy ink MoU to provide border security solutions in India
More information is available at www.davidmkelly.net/ Perimeter
Author returning
These findings suggest that there is a lack of confidence in the solutions used, especially as 50 per cent of Middle East organisations have seen their perimeter security breached in the past 12 months.
Gemalto: Middle East businesses confident about keeping hackers at bay
24, Perimeter expanded service into Deer Lake, Sachigo Lake, Weagamow (Round Lake) and North Spirit Lake with many of these new flights connecting to Bearskin Airlines service with Thunder Bay.
Bearskin Airlines, Perimeter Aviation meet in the middle
Despite this, 54 per cent said they have suffered from a perimeter security system breach in the past 12 months.
Mideast firms lost close to $1.5m due to data breaches
These breaches happened despite working perimeter security technology.
Businesses continue investing in perimeter security despite IT professionals' lack of confidence in them: Report
Middle Eastern organisations have incurred a total financial loss of approximately $1,493,590 over the last five years due to system perimeter breaches, findings of the third annual Data Security Confidence Index released by Gemalto have found.
Middle East firms lost $1 million in data breaches in last five years