Percutaneous transhepatic cholangiography (PTHC) is an x-ray test used to identify obstructions either in the liver or bile ducts that slow or stop the flow of bile from the liver to the digestive system.

Because the liver and bile ducts are not normally seen on x rays, the doctor injects the liver with a special dye that will show up on the resulting picture. This dye distributes evenly to fill the whole liver drainage system. If the dye does not distribute evenly, this is indicative of a blockage, which may be caused by a gallstone or a tumor in the liver, bile ducts, or pancreas.

Patients should report allergic reactions to:
PTHC should not be performed on anyone who has cholangitis (inflammation of the bile duct), massive ascites, a severe allergy to iodine, or a serious uncorrectable or uncontrollable bleeding disorder. Patients who have diabetes should inform their doctor.

PTHC is performed in a hospital, doctor's office, or outpatient surgical or x-ray facility. The patient lies on a movable x-ray table and is given a local anesthetic. The patient will be told to hold his or her breath, and a doctor, nurse, or laboratory technician will inject a special dye into the liver as the patient exhales.
The patient may feel a twinge when the needle penetrates the liver, a pressure or fullness, or brief discomfort in the upper right side of the back. Hands and feet may become numb during the 30-60 minute procedure.
The x-ray table will be rotated several times during the test, and the patient helped to assume a variety of positions. A special x-ray machine called a fluoroscope will track the dye's movement through the bile ducts and show whether the fluid is moving freely or if its passage is obstructed.
PTHC costs about $1,600. The test may have to be repeated if the patient moves while x rays are being taken.

An intravenous antibiotic may be given every 4-6 hours during the 24 hours before the test. The patient will be told to fast overnight. Having an empty stomach is a safety measure in case of complications, such as bleeding, that might require emergency repair surgery. Medications such as aspirin, or non-steroidal anti-inflammatory drugs that thin the blood, should be stopped three-seven days prior to taking the PRHC test. Patients may also be given a sedative a few minutes before the test begins.

A nurse will monitor the patient's vital signs and watch for:
The patient should stay in bed for at least six hours after the test, lying on the right side to prevent bleeding from the injection site. The patient may resume normal eating habits and gradually resume normal activities. The doctor should be informed right away if pain develops in the right abdomen or shoulder or in case of fever, dizziness, or a change in stool color to black or red.

Septicemia (blood poisoning) and bile peritonitis (a potentially fatal infection or inflammation of the membrane covering the walls of the abdomen) are rare but serious complications of this procedure. Dye occasionally leaks from the liver into the abdomen, and there is a slight risk of bleeding or infection.

Enlargement of bile ducts may indicate:

Ascites — Abnormal accumulation of fluid in the abdomen.
Bile ducts — Tubes that carry bile, a thick yellowish-green fluid that is made by the liver, stored in the gallbladder, and helps the body digest fats.
Cholangitis — Inflammation of the bile duct.
Fluoroscope — An x-ray machine that projects images of organs.
Granulomatous disease — Characterized by growth of tiny blood vessels and connective tissue.
Jaundice — Disease that causes bile to accumulate in the blood, causing the skin and whites of the eyes to turn yellow. Obstructive jaundice is caused by blockage of bile ducts, while non-obstructive jaundice is caused by disease or infection of the liver.

[ko-lan″je-og´rah-fe]
x-ray examination of the bile ducts, using a radiopaque dye as a contrast medium. In the intravenous method, the dye is administered intravenously and is excreted by the liver into the bile ducts. X-ray films are taken at 10-minute intervals as the dye is excreted via the cystic, hepatic, and common bile ducts into the intestinal tract. The excretion is usually completed within 4 hours. Preparation of the patient for the intravenous method requires restriction of fluids to concentrate the dye and may also include cleansing of the intestinal tract on the day prior to the examination with a laxative or enema so that fecal material and gas will not obscure the biliary tract.

Sometimes cholangiography is done after surgery of the gallbladder and biliary tract. In this method the radiopaque dye is injected directly into a tube that has been left in the biliary tract since the time of surgery. Films are taken immediately after the dye is injected. If no obstruction is present, the biliary structures fill readily and rapidly empty into the intestinal tract.

When it is necessary for the surgeon to locate gallstones or other obstructive conditions at the time that surgery is being performed, the dye may be injected directly into the bile ducts. Films are taken in the operating room, and obstructions not otherwise discernible can be located and corrected while the patient is still anesthetized.

A patient who is jaundiced cannot undergo either intravenous cholangiography or oral cholecystography. An alternative route for the injection of the contrast dye and visualization of the biliary system is percutaneous transhepatic cholangiography. Under fluoroscopic control, a needle is introduced through the skin and into the liver where the contrast material is deposited. Obstructed and distended bile ducts can then be visualized. After visualization the ducts can be drained via the needle. 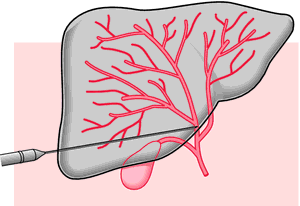 contrast radiographic examination of the biliary system performed by injection of radiopaque dye through a percutaneously placed needle inserted into an intrahepatic bile duct.