(pat'ern),
1. A design; often refers to chest radiographic findings.
2. In dentistry, a form used in making a mold, as for an inlay or partial denture framework.

(pat'ĕrn)
1. A design.
2. dentistry A form used in making a mold, as for an inlay or partial denture framework. 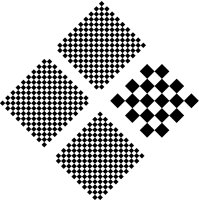 (pat'ĕrn)
1. In dentistry, form used in making a mold, as for an inlay or partial denture framework.
2. A design; often refers to chest radiographic findings.

Q. What pattern of heredity does diabetes follow? I know that baldness comes from your mother's father. How does diabetes travel through generations?

A. Ninety percent of children who develop type 1 diabetes actually have no relative with the disease. But it’s an auto immune disease. That means that some people are in risk of getting diabetes type 1. Depends on the immune system they inherited. It’s not “recessive” or “dominant”, if your parent has type 1 – you have a 25% chance of getting the risk factor.

A. Hello. I think some of the previous posts are correct. In addition to increasing your physical activity, it's also very important to monitor how often you go to the bathroom to get rid fat causing waste inside of your stomach. You definitely need to drink lots of water and in order to allow for your body to naturally dispose of these harmful waste. You can find out more information on ways to start losing weight naturally here: http://getwellstaywell.wordpress.com

Q. Which would be the best diet pattern for a man to have a flat stomach?

A. I have found that if you eat a snack every 3 hours it will increase your metabolism and therefore help you lose weight

Feedback
Flashcards & Bookmarks ?
Please log in or register to use Flashcards and Bookmarks. You can also log in with
Flashcards ?
My bookmarks ?
+ Add current page to bookmarks
TheFreeDictionary presents:
Write what you mean clearly and correctly.
Mentioned in ?
References in periodicals archive ?
This knowledge can also be used by services, run on top of OBDPR in order to achieve intelligent functionalities, such as a guided question-answer dialogue for selecting patterns or verifying design decisions.
* Allows design pattern experts to annotate patterns with additional knowledge.
Improving design pattern adoption with an ontology-based repository
In this paper, we propose to summarize frequent graph patterns by a much smaller number of representative graph patterns.
patterns generated by graph mining algorithms renders the direct analysis of discovered patterns extremely difficult and has deterred the applications of mining algorithms to a large extent, especially when the support threshold is low.
Clustering frequent graph patterns
Repeating patterns contain a discernable unit of repeat; that is, "the pattern has a cyclic structure that can be generated by the repeated application of a smaller portion of the pattern" (Liljedahl, 2004, p.
Promoting repeating patterns with young children--more than just alternating colours! Marina Papic explains how experiences in the early years of schooling should focus on identifying, justifying and transferring various patterns using a variety of materials if a sound understanding of patterning is to develop in students
A few of the perceived barriers to using printed patterns in production casting include cost, time associated with printing, and the difficulty of casting some of the more complex patterns.
Calculating When Printed Patterns Are Viable for Production: In a study, 15 cast parts and patterns were analyzed to determine general baselines for when printed patterns are cost-effective and time-effective compared to traditional tooling
It's also important to recognize that sewing patterns don't use the same sizing methods as ready-to-wear clothing.
JOI OF FITTING: SIZE WISE
Choose different scale patterns, some with large open background space together with some that are more compact.
DESIGN THERAPY
A Fault list is formed for all patterns. In this article, well offer a new fault grouping for each pattern, and thus reduce the fault simulation time.
Acceleration of fault simulation based on a separate list of faults for each test pattern
In these words, one of the two palindromic patterns is a word: AERATE = ART + EAE ANDEAN = ADA + NEN PROPER = POE + RPR EDDIED = EDE + DID ESPIES = EPE + SIS
Generic alternades
Monopulse angle estimation methods require the formation of sum and difference patterns. The beam peak of the sum pattern is used to detect a target, whereas the boresight null of the difference pattern is used to determine accurately a target's angular location.
An alternative method for difference pattern formation in monopulse antenna
Here, the element letter L focuses on decoration using linear patterns.
Line: lessons 1 in a series of 5