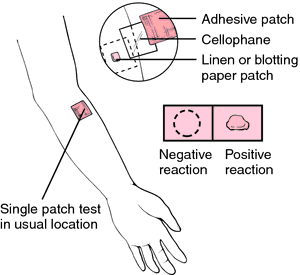 a test of skin sensitiveness: a small piece of paper, tape, or a cup, wet with nonirritating diluted test fluid, is applied to skin of the upper back or upper outer arm and after 48 hours the covered is compared with the uncovered surface; an erythematous reaction with vesicles occurs if the substance causes contact allergy.
See also: photo-patch test.

n.
A test for allergic sensitivity in which a suspected allergen is applied to the skin on a small surgical pad.

Allergy skin test, contact dermatitis skin test, patch skin test Immunology An epicutaneous test of contact-type–delayed hypersensitivity, which consists of applying a patch with a low dose of an allergen–antigen to an unexposed area of the skin, usually the back, and observing the site 1-2 days later; the most common sensitizing haptens in North America are poison ivy–Toxicodendron radicans, nickel, chromate, paraphenylenediamine–a dye constituent, ethylenediamine–a solvent and emulsifier, local anesthetics–eg, benzocaine, rubber, neomycin, and others; PT materials have been standardized and are available commercially, either as individual allergens, or as batteries of allergens, including those for specific occupations–eg, hairdressers, printers, and others; incorrect PT results are common in the form of false-positives, due to too high concentration of allergens in the patches, misinterpretation of irritant reactions, and generalized erythema of the skin testing site; false-negative results are linked to technical errors and failure to simulate the 'real-world' situation in which the person is exposed to the allergen

(pach test)
A test of skin sensitiveness: a small piece of paper, tape, or a cup, wet with a dilute solution or suspension of test material, is applied to skin of the upper back or upper outer arm, and after 48 hours the area previously covered is compared with the uncovered surface; an erythematous reaction with vesicles occurs if the substance causes contact allergy.
See also: photo-patch test 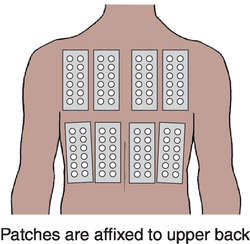 APPLYING PATCH TEST
A skin test in which a low concentration of a presumed allergen is applied to the skin beneath an occlusive dressing. The test is the primary method used to determine the presence of allergic contact dermatitis. If the concentration of the agent is too high or an allergy exists to the material used in the dressing, false-positive reactions can occur as a result of local irritation. False-negative reactions may result if the concentration of the suspected allergen is too low, or if the duration of the test is too short. Commercially available, standardized kits to facilitate patch testing include the T.R.U.E. test and Finn Chambers. See: illustration; skin test
illustration

A skin test that is done to identify allergens. A suspected substance is applied to the skin. After 24-48 hours, if the area is red and swollen, the test is positive for that substance. If no reaction occurs, another substance is applied. This is continued until the patient experiences an allergic reaction where the irritant was applied to the skin.
Mentioned in: Dermatitis, Skin Lesions

(pach test)
A test of skin sensitivity; a small piece of paper, tape, or a cup, wet with a dilute solution or suspension of test material, is applied to skin of the upper back or upper outer arm, and after 48 hours the area previously covered is compared with the uncovered surface; an erythematous reaction with vesicles occurs if the substance causes contact allergy.

Feedback
Flashcards & Bookmarks ?
Please log in or register to use Flashcards and Bookmarks. You can also log in with
Flashcards ?
My bookmarks ?
+ Add current page to bookmarks
TheFreeDictionary presents:
Write what you mean clearly and correctly.
Mentioned in ?
References in periodicals archive ?
In at least one case described there was a concurrent reproducibility of positive thiuram patch tests.
SEVERE FACIAL REACTION TO THIURAMS IN SURGEONS
Our study concluded that 62% of patients suspected of metal contact dermatitis tested positively for patch test with nickel.
Frequency of positive patch tests to nickel in patients suspected of metal contact dermatitis
In the case presented here, the results of patch tests on intact skin (negative in immediate reading) and open tests (positive only on inflamed skin) may indicate that epicutaneously applied TCD can induce an immediate reaction only when a damaged epidermal barrier is present.
Immediate and delayed contact hypersensitivity to thiocolchicoside
The Chi-square test and Kruskal-Wallis test were used for comparison of the prevalence of CD, OCD, and OACD and positive patch test reactions to at least one of the allergens between different groups.
Survey of Occupational Allergic Contact Dermatitis and Patch Test among Clothing Employees in Beijing
In our study, more number of positive patch test reactions were seen in the male (69.70%) compared to females (35.29%).
Study of patch testing in allergic contact dermatitis in hands and feet
Another patient who had positive patch test from phenyl salicylate, chloroacetamide, and cetrimide was using 5 different varieties of face creams.
Cosmetic contact sensitivity in patients with melasma: results of a pilot study
In order to compare the MPD to mean texture depth (MTD) from sand patch test, a transformation equation is used to reclassify the MPD as an Estimated Texture Depth (ETD).
Comparison of surface macrotexture measurement methods
She recently set up a salon that uses natural hair colouring products and says: "I'm getting quite a high number of new clients who are saying that they've never been tested and these are women in their fifties who have never had a skin patch test. "It's important to test someone for every treatment because you can develop a reaction at any time, even after years of having a colour applied."
Hair to dye for; But colouring has its share of problems
Manufacturers say do a patch test 48 hours before using the dye, but my reaction didn't show for 72 hours."
HAIR DYE LEFT ME IN HOSPITAL
But out of the 30 salons, 25 failed to suggest the customer have a patch test to see if they were allergic to the dye before having the treatment done.
HAIR DYE HEALTH RISK IN WELSH SALONS; Clients put in allergy peril, says survey
Key words: Patch test, Allergens, Allergic contact dermatitis, Hispanic population
Prevalence of contact allergens in a hispanic population