[mi″as-the´ne-ah]
muscular debility or weakness. adj., adj myasthen´ic.
myasthenia gas´trica weakness and loss of tone in the muscular coats of the stomach; atony of the stomach.
myasthenia gra´vis an autoimmune disease manifested as fatigue and exhaustion of the muscles, aggravated by activity and relieved by rest; the weakness ranges from mild to life-threatening. There is no muscular atrophy or loss of sensation. It characteristically affects the ocular and other cranial muscles and tends to fluctuate in severity. The muscular weakness is believed to be caused by the presence of circulating antibodies directed against the postsynaptic acetylcholine receptors at the neuromuscular junction; it is not clear what initiates formation of the antibodies. There also is evidence of altered cellular immunity.

Symptoms of myasthenia gravis include ptosis, diplopia, and difficulty in chewing and swallowing. Weakness of the upper and lower limbs usually is first noted when the patient tries to walk upstairs, gets up from a sitting position, raises arms over the head, or lifts a heavy object. Ventilatory deficiency due to weakness of the respiratory muscles occurs in those with a severe form of the disease. About 20 per cent of all affected patients have only ocular myasthenia; the others have some form of generalized weakness. The presence of acetylcholine receptor antibodies is elevated in patients with myasthenia gravis. Diagnosis is established when there is a favorable response to cholinergic drugs, which are inhibitors of acetylcholinesterase (an enzyme that breaks down acetylcholine); their action permits acetylcholine levels to become high enough to stimulate the postsynaptic receptors.

Children born of mothers with the disease exhibit a transient weakness that is evident at birth or may appear in the first day or so, with feeding difficulties manifested by poor sucking and swallowing abilities. They rarely have bulbar involvement, and usually recover in a week or so after birth. This condition is called neonatal myasthenia, and is related to circulating antibodies acquired from the mother while the fetus was in utero. Congenital myasthenia is also present at birth, but it may not be evident until after the first year of life. The child produces antibodies against acetylcholine receptor sites and experiences symptoms similar to those presented by myasthenia gravis patients of all ages.

The patient is started on anticholinesterase drugs, such as neostigmine or pyridostigmine, as soon as the diagnosis is confirmed. The steroid prednisone and other immunosuppressive drugs provide some relief of symptoms and longer periods of remission. thymectomy is an alternative treatment for those patients whose weakness and debility do not respond adequately to cholinergic drug therapy. plasma exchange to remove the circulating autoantibodies provides some clinical improvement. High-dose intravenous immune globulin may also be used to temporarily improve immune function.

Myasthenic crisis can develop suddenly after a systemic infection, surgery, or some other stressful event. The crisis usually is transient, but during the critical phase assisted ventilation and intensive care are needed to assure survival of the patient with respiratory failure. 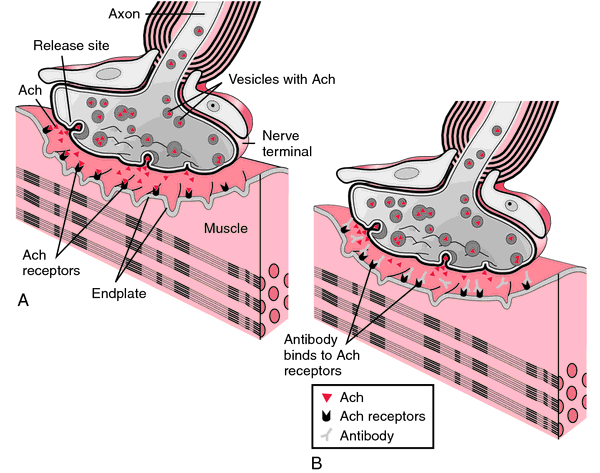 Schematic drawing of the normal neuromuscular junction (A) and its simplification in myasthenia gravis (B). The antibodies bind to the acetylcholine (Ach) receptor preventing binding of the neurotransmitter (Ach). From Damjanov, 2000.
neonatal myasthenia transient myasthenia gravis (lasting a week to a month) in infants born to myasthenic women.
Miller-Keane Encyclopedia and Dictionary of Medicine, Nursing, and Allied Health, Seventh Edition. © 2003 by Saunders, an imprint of Elsevier, Inc. All rights reserved.