(ov'yūl, ō'vū-),
1. The oocyte of a mammal, especially while still in the ovarian follicle.
2. A small beadlike structure bearing a fancied resemblance to an ovule.
Synonym(s): ovulum
[Mod. L. ovulum, dim. of L. ovum, egg]

(ŏv′yo͞ol, ō′vyo͞ol)
n.
1. Botany A structure in seed plants that consists of the embryo sac surrounded by the nucellus and one or two integuments and that develops into a seed after it is fertilized.
2. Zoology A small or immature ovum.
ov′u·lar (ŏv′yə-lər, ō′vyə-), ov′u·lar′y (-lĕr′ē) adj. 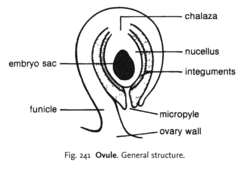 a structure found in higher plants that contains an egg cell and develops into a seed after FERTILIZATION. In ANGIOSPERMS, the ovule develops within the ovary of a carpel, and consists of an inner EMBRYO SAC containing the egg cell surrounded by the NUCELLUS, which in turn is enclosed within two INTEGUMENTS. The ovule is connected to the ovary wall by the FUNICLE.

A. If someone knew it, it'd solve the human race many problems with fertility. The problem is that ovulation (and thus, the period of possible fertility) happens 14 days BEFORE the onset of menses, so you know about it only retrospectively.

However there ways such as serial body temperature measuring, along with kits that measures the level of hormones in the urine in order to estimate the time of the coming ovulation, and help in timing intercourse.

You may read more about it here (www.mayoclinic.com/health/ovulation-signs/AN01521 ) but anyway, consulting a doctor (e.g. gynecologist) may be wise.
More discussions about ovule