[skul]
the skeleton of the head, consisting of the cranium and the mandible. The cranium forms the domed top, back, and sides of the skull; several of its bones are large, smooth, gently curved, and connected to each other by dovetailed joints called sutures, which permit no movement and make the mature skull rigid. They protect the brain, with their curved exterior serving to deflect blows; the eyes, ears, and nose are also protected by being recessed into the skull and surrounded by bone.

At birth the skull joints are flexible, so that the infant's head can be compressed as it emerges from the birth canal. The joints remain flexible to allow expansion until the cranial bones are fully formed, around the second year of life. An infant's skull contains soft areas, or fontanels, where the bones of the cranium do not meet.

The skull is supported by the highest vertebra, called the atlas. This joint permits a back-and-forth, nodding motion. The atlas turns on the vertebra below it, the axis, which allows the skull to turn from side to side.
Disorders of the Skull. The skull is rarely affected by disease. Uncommon ones like osteitis deformans and acromegaly cause the bones to increase in size. Like other bones, the skull may be fractured by blows, falls, or other accidents, but skull fracture can be far more dangerous because of its proximity to the brain. 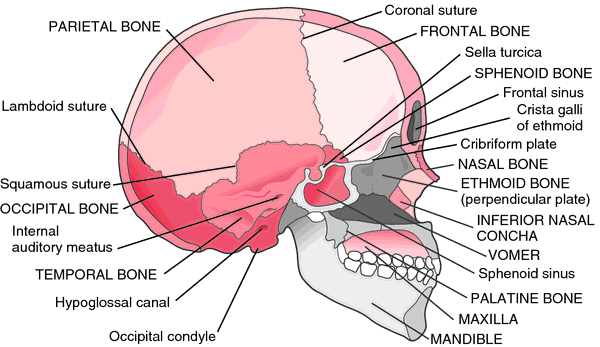 (skŭl)
The bones of the head collectively. In a more limited sense, the neurocranium, the bony braincase containing the brain, excluding the bones of the face (viscerocranium).
[Mid. Eng. skulle, a bowl]
Medical Dictionary for the Health Professions and Nursing © Farlex 2012 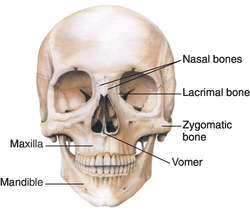 BONES OF SKULL: Facial bones
The bony framework of the head, composed of 8 cranial bones, the 14 bones of the face, and the teeth. It protects the brain and sense organs from injury. Synonym: calvaria; cranium See: illustration; skeleton

The bony skeleton of the head and the protective covering for the brain. The part of the skull that encloses the brain is called the cranium.
Collins Dictionary of Medicine © Robert M. Youngson 2004, 2005