infection with promastigotes (leptomonads) of Leishmania tropica and of Leishmaniasis major inoculated into the skin by the bite of an infected sandfly, Phlebotomus (commonly P. papatasii); it is endemic to parts of Asia Minor, northern Africa, and India, and is known by innumerable names, including tropical sores, tropical ulcers, and other indications of locality (for example, Aleppo, Baghdad, Delhi, or Jericho boil; Aden ulcer; Biskra button); the ulcer begins as a papule that enlarges to a nodule and then breaks down into an ulcer. Leishmanial cells are seen within histiocytes in hematoxylin and eosin-stained tissue sections. Two distinctive clinical and epidemiologic diseases are recognized: the more common and widespread zoonotic rural disease with a moist acute form, caused by L. major, with reservoir rodent hosts, and an urban, anthroponotic, dry, chronic form of leishmaniasis caused by Leishmaniasis tropica, without a reservoir host, and now largely controlled. See: zoonotic cutaneous leishmaniasis, anthroponotic cutaneous leishmaniasis.
See also: diffuse cutaneous leishmaniasis.
Synonym(s): bouton d'Orient, bouton de Baghdad, bouton de Biskra, Old World leishmaniasis
Farlex Partner Medical Dictionary © Farlex 2012

(sor)
1. Tender; painful.
2. Any type of tender or painful ulcer or lesion of the skin or mucous membrane.

A thin-walled blister at the junction of the mucous membranes of the mouth and lips. It is caused by recurrent infection with herpes simplex virus (HSV) in those who have antibodies to HSV. Treatment is recommended only for immunocompromised patients, who are given acyclovir.
See: fever blister

An ulcer of the skin of the arms or legs, sometimes caused by diphtheria or staphylococci, typically contracted in Australia or Burma.

Infection of the skin or of poorly tended wounds by Corynebacterium diphtheriae, esp. in warm, moist, tropical climates. 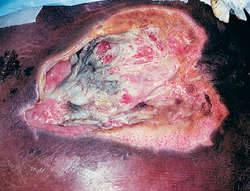 The initial sore or hard chancre of syphilis.

A former name for
chancroid.

A slang term for a superficial infected area of the skin seen in alcoholics with poor personal hygiene. It is erroneously thought to be due to specific action of the wine.
Medical Dictionary, © 2009 Farlex and Partners

LEISHMANIASIS of the skin. This is a tropical condition caused by the single-celled microscopic parasite Leishmania tropica and transmitted by the bite of the sandfly. It occurs in Mediterranean areas, China, and parts of India, but is spreading to the west Mediterranean holiday resorts. At the site of the bite, usually on the face, arms or legs, a red papule develops which enlarges to 2–10 cm in diameter and which may ulcerate. Small satellite papules commonly develop. The condition persists for 3 months to 3 years, then heals leaving a depressed, often disfiguring, scar.
Collins Dictionary of Medicine © Robert M. Youngson 2004, 2005