a point under the hypothalamus of the brain where the two optic nerves meet and cross over, so that stimuli from each eye are interpreted in the OPTIC LOBE of the opposite side of the brain.
Collins Dictionary of Biology, 3rd ed. © W. G. Hale, V. A. Saunders, J. P. Margham 2005

A structure located above the pituitary gland and formed by the junction and partial decussation (crossing-over) of the optic nerves. The fibres from the nasal half of the retina of the left eye cross over to join the fibres from the temporal half of the right retina to make up the right optic tract and vice versa. About 53% of the axons of the optic nerves cross to the opposite tract (Fig. C9). A lesion of the chiasma produces a typical field defect (heteronymous hemianopia). Note: also spelt chiasm. See circle of Willis; decussation; visual pathway; stereo-blindness; optic tracts. 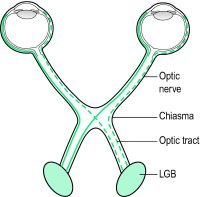 Fig. C9 An illustration of the decussation of the optic nerve fibres occurring in the optic chiasma
Millodot: Dictionary of Optometry and Visual Science, 7th edition. © 2009 Butterworth-Heinemann

Feedback
Flashcards & Bookmarks ?
Please log in or register to use Flashcards and Bookmarks. You can also log in with
Flashcards ?
My bookmarks ?
+ Add current page to bookmarks
Mentioned in ?
References in periodicals archive ?
Optic chiasma: Partial decussation of human retinal axons takes place in optic chiasma.
Retinotopic distribution of axons continues in optic chiasma
In the optic tract fibres from optic chiasma are rearranged to correspond with the position of lateral geniculate body.
Visual field defects in neurological diseases
Similarly, optic nerve or optic chiasma damage may cause visual blurring or diplopia.23
It may be accompanied by ventricular collapse and may include: Descent of Cerebellar tonsils, which maybe mistaken for an Arnold-Chiari malformation Type I, prepontine cistern effacement, an inferiorly displaced optic chiasma, obliteration or effacement of the prechaismatic cistern, and reduction of the subarachnoid cisterna.
Pathophysiology and management of Spontaneous Intracranial Hypotension - A Review
In their case optic globe, nerves and optic chiasma was absent.
A case of familial bilateral anophthalmos with syndactyly
The re-calculation of the radiotherapy doses applied; showed that the tissues in the base of the skull, the brain and the optic chiasma would tolerate a maximum dose of further 45 Gy.
Nasopharyngeal carcinoma presented as cavernous sinus tumour