[mo̳v´ment]
1. an act of moving; called also motion.
2. an act of defecation.
active movement movement produced by the person's own muscles.
ameboid movement movement like that of an ameba, accomplished by protrusion of cytoplasm of the cell.
associated movement movement of parts that act together, as the eyes.
brownian movement the peculiar, rapid, oscillatory movement of fine particles suspended in a fluid medium; called also molecular movement.
circus movement the propagation of an impulse again and again through tissue already previously activated by it; the term is usually reserved for the reentry involving an accessory pathway.
molecular movement brownian movement.
passive movement a movement of the body or of the extremities of a patient performed by another person without voluntary motion on the part of the patient.
vermicular m's the wormlike movements of the intestines in peristalsis.
Miller-Keane Encyclopedia and Dictionary of Medicine, Nursing, and Allied Health, Seventh Edition. © 2003 by Saunders, an imprint of Elsevier, Inc. All rights reserved.

(mūv'mĕnt)
1. Active change of position or location; said of the entire body or of one or more of its members or parts.
2. Synonym(s): stool.
3. Synonym(s): defecation.
4. Synonym(s): activity.
[L. moveo, pp. motus, to move]
Medical Dictionary for the Health Professions and Nursing © Farlex 2012

1. Change or apparent change in position. 2. The act of moving.
movement after-effect See waterfall after-effect.against m. 1. Apparent movement of an object seen through a lens in a direction opposite to that in which the lens is moved. This occurs when looking through a plus lens. 2. See retinoscope. See with movement.
alpha movement A form of apparent movement perceived when different sizes of an object are presented in an alternating sequence with an interstimulus interval of about 60 ms, the object appears to expand and contract.
apparent movement The perception of movement induced by stationary separated objects, when the objects are presented rapidly on and off, one after another with a brief time interval between the two stimuli. The illusion of apparent movement is generally attributed to the stimulation of motion-sensitive neurons in area MT (V5) of the visual cortex. Examples: alpha movement, beta movement, gamma movement, phi movement, stroboscopic movements. Syn. apparent motion.
autokinetic movement See autokinetic visual illusion.
beta movement A form of apparent movement perceived when two or more separated stationary objects are presented in rapid sequence with an interstimulus interval of between 40 ms and 60 ms, the object appears to move continuously from one position to the other. Beta movement is the basis of smooth, continuous motion perception in cinematography in which frames are commonly presented at a rate of 24 frames per second (or about 42 ms time interval). Syn. optimum movement. See stroboscopic movements.
compensatory eye movement's See static eye reflex.
conjugate eye movement's See version.
cyclofusional eye movement's  See cyclofusion.
disjugate eye movement's See disjunctive movements.
disjunctive eye movement's Movements of the two eyes in which the eyes move in opposite directions, as in convergence or divergence. Syn. disconjugate movements; disjugate eye movements. See vergence.
eye movement's The act or process of a change in position of the globe of the eye. See electrooculogram; motor fusion; vestibulo-ocular reflex; vergence; version.
fixation movement's Involuntary movements of the eye occurring when actually fixating an object. Three types of movements have been observed: the drifts, the micronystagmus (tremors) and the saccades (or microsaccades). These movements are too subtle to be seen by direct observation. The drifts are characterized by a small amplitude (1-7 minutes of arc) and a low frequency (2-5 Hz). The micronystagmus movements are characterized by a very small amplitude (5-25 seconds of arc) and a higher frequency (30-100 Hz) and the saccadic movements by a small amplitude (1-20 minutes of arc) and low frequency (0.1-1 Hz). Syn. involuntary eye movements; miniature eye movements; physiological nystagmus (Fig. M13). See saccadic eye movement; stabilized retinal image.
following movement See pursuit movement.
fusional movement See fusional movements.
gamma movement A form of apparent movement that is perceived when a single stimulus is presented in an alternating sequence with an interstimulus interval of about 60 ms under high and low illumination, the object appears to expand and contract.
optimum movement See beta movement.
optokinetic movement See nystagmus.
phi movement Illusion of movement created when one object disappears and an identical object appears in a neighbouring region of the same plane. If the time interval between the two sources is between 0.06 s and 0.2 s, the observer will see an apparent movement of the source, which appears to jump from the first to the second position without the perception of continuity. Hence it is considered as a partial illusion of movement. Some observers also see each source flickering depending on the rate of alternation. The phi phenomenon has been applied to test patients with convergent and divergent strabismus. This is the phi phenomenon test of Verhoeff: two light sources, separated by the angle of strabismus, are placed in front of the patient, as in a major amblyoscope. The two foveas are stimulated with a short time interval between stimulations and patients with normal retinal correspondence do not see a movement whereas those with abnormal retinal correspondence do. Syn. phi phenomenon. See stroboscopic movements; abnormal retinal correspondence; movement threshold.
pursuit movement Movement of an eye fixating a moving object. The fixation can remain locked on the target as long as the movement is smooth and the velocity below about 40º/s. Abnormal pursuit eye movements could be due to ocular motor nerve palsy, cerebellar disease, internuclear ophthalmoplegia, systemic medication, etc. Syn. following movement. See motility test.
rapid eye movement's (REM) Fast eye movements that occur periodically during sleep and are associated with dreaming.
saccadic eye movement A short rapid and abrupt movement of the eye as occurring in reading a line of printed words or in fixating from one point to another. The peak velocity of a saccade of 10º amplitude can exceed 400º/s and be completed in 40 ms. Syn. saccade. See antisaccade; hypermetria; fixation movements; reading.
scissors movement 1. Apparent change in the angle between two lines seen through a rotating astigmatic lens. 2. See retinoscope.
stroboscopic movement's Apparent movements as produced by a stroboscope. If the frequency of stroboscopic illumination is less than the rotation of a moving object it appears to rotate slowly but if the frequency is increased above that of the moving object it appears to rotate slowly in the opposite direction to its real rotation. (If the moving object is rotating at x rotations per second when the frequency is a full multiple of x, one sees the object motionless.) Beta and phi movements are types of stroboscopic movements. See stroboscope.
movement threshold See movement threshold.
torsional movement See torsion.
vergence movement's See disjunctive movements.
with movement 1. Apparent movement of an object seen through a lens in the same direction as that in which the lens is moved. This occurs when looking through a minus lens. 2. See retinoscope. See against movement. 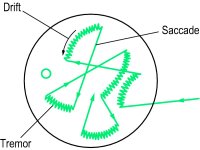 Fig. M13 Diagram of the movements of the optical image on the retina produced by the miniature involuntary eye movements of the eye (tremors, drifts and saccades) during fixation of a stationary object for a period of about 10 seconds
Millodot: Dictionary of Optometry and Visual Science, 7th edition. © 2009 Butterworth-Heinemann

A. First, congratulations for Olivia..

You should feel your baby's first movements, called "quickening," between weeks 16 and 24 of your pregnancy. If this is your first pregnancy, you may not feel your baby move until closer to 24 weeks. By the second pregnancy, some women start to feel movements as early as 13 weeks (this varies in every pregnant moms).

So when you reach your second trimester later, you need to monitor your baby's movement sometimes (just like saloni explained to you). Feel free to consult with your OB-GYN doctor whenever you feel a problem with your pregnancy.

But I wish you all the best for your pregnancy. Good luck! Stay healthy always..

A. It is nothing to worry maria. It’s a usual happening during pregnancy. Here I am 13 weeks pregnant with my second child and I too experience frequent bowel movements (2-4/day). It feels as if I am not gaining any weight b/c everything that goes in goes right out. I know this is okay. Here we can get an expert's opinion on this. So don’t worry and comfort your loving and caring husband. My best wishes for your healthy first baby.

A. The only way to know for sure is to check! Can estimate the severity of the problem. Is your knee red? Is it hot? Is it swollen? Does the pain have the same severity or does the pain increase with time? If you answered one of those questions with a 'yes' several hours after the injury, you should probably talk to your GP
More discussions about movement
This content is provided by iMedix and is subject to iMedix Terms. The Questions and Answers are not endorsed or recommended and are made available by patients, not doctors.