[om´fah-lo-sēl″]
protrusion, at birth, of part of the intestine through a defect in the abdominal wall at the umbilicus; see also umbilical hernia. 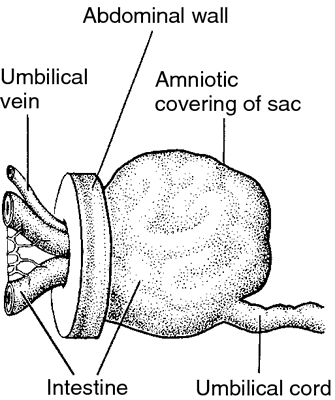 A large omphalocele with structure and contents of the hernial sac. From Betz et al., 1994.
Miller-Keane Encyclopedia and Dictionary of Medicine, Nursing, and Allied Health, Seventh Edition. © 2003 by Saunders, an imprint of Elsevier, Inc. All rights reserved.

A congenital periumbilical defect in which loops of small intestine prolapse into a sac covered by peritoneum and amnion.

Mechanism
Caused by a failure of the intestine at 10 weeks of embryonic development (a time when the gut is normally outside the abdomen) to return to the abdominal cavity.
Segen's Medical Dictionary. © 2012 Farlex, Inc. All rights reserved.

Neonatology A congenital periumbilical defect in which loops of small intestine prolapse into a sac covered by peritoneum and amnion
McGraw-Hill Concise Dictionary of Modern Medicine. © 2002 by The McGraw-Hill Companies, Inc.

(om-fal'ŏ-sēl)
Congenital herniation of viscera into the base of the umbilical cord, with a covering membranous sac of peritoneum-amnion.
See also: umbilical hernia
Synonym(s): exomphalos (3) , exumbilication (3) .
[omphalo- + G. kēlē, hernia]
Medical Dictionary for the Health Professions and Nursing © Farlex 2012

Herniation of some of the abdominal contents into the umbilical cord.
Collins Dictionary of Medicine © Robert M. Youngson 2004, 2005

A congenital hernia in which a small portion of the fetal abdominal contents, covered by a membrane sac, protrudes into the base of the umbilical cord.
Mentioned in: Prenatal Surgery
Gale Encyclopedia of Medicine. Copyright 2008 The Gale Group, Inc. All rights reserved.

Feedback
Flashcards & Bookmarks ?
Please log in or register to use Flashcards and Bookmarks. You can also log in with
Flashcards ?
My bookmarks ?
+ Add current page to bookmarks
Mentioned in ?
References in periodicals archive ?
Since Schuster first treated the gastroschisis successfully with staged repair surgery in 1967, staged reduction as early as possible has been recommended in the treatment of children with giant omphaloceles and no capsule rupture (6-9).
Omphaloceles in combination with a self-made hemispherical cushion: a report of 12 cases
The formation of small and giant omphaloceles seems to involve different mechanism [17].
15q23Gain in aNeonate with a GiantOmphaloceleandMiiltiple Co-Occurring Anomalies
Abdominal wall defects (AWDs) are a complex group of anomalies, and include the common AWDs (gastroschisis and omphalocele) as well as the complex AWDs (body stalk anomaly, abdominoschisis, pentalogy of Cantrell, bladder exstrophy, and cloacal exstrophy).
A Giant Gastroschisis Associated with Pulmonary Hypoplasia and Spinal Anomaly: A Case Report and a Literature Review
There had been antenatal monitoring since the prenatal ultrasound diagnosed an omphalocele, without any other obvious associated anomaly (the caryotype and fetal cardiac ultrasound were normal).
Celio-mesenteric Trunk Associated with Giant Omphalocele: Surgical Consequences/Tronco Celiaco-Mesenterico Asociado con Onfalocele Gigante: Consecuencias Quirurgicas
Silon as a sac in the treatment of omphalocele and gastroschisis J Ped Surg 1969;4:3.
Early primary repair of gastroschisis without general anaesthesia
Gastroschisis and omphalocele in Singapore: a ten-year series from 1993 to 2002.
Omphalocoele, ten years experience at a tertiary care hospital
"Once we heard the word, 'omphalocele,' it was our world," ABC news quoted Davis as saying.
Baby born with organs outside body undergoes rare surgery
Key Words: omphalocele, non-invasive ventilation, continuous positive airway pressure, Pentalogy of Cantrell, tracheostomy, paediatrics
Long-term respiratory support in children with giant omphalocele
On ultrasound, the 24-week-gestational-age fetus was noted to have a midline umbilical wall defect with a herniated sac containing the liver and bowel (Figure 1A) with the umbilical cord attached at the apex of the sac, which was suggestive of an omphalocele. The ultrasonographic examination also revealed a sternal defect with ectopia cordis, scoliosis, and clubfoot.
Radiological case of the month: Paritosh C. Khanna, MD, DMRE; Alpa Bharati, MD; Suleman A. Merchant, MD, DMRD
The EEC covers a spectrum with different severity levels, ranging from epispadias (E) representing the mildest form, with lower and upper fissure, to the full picture of classical bladder exstrophy (CEB), and exstrophy of the cloaca (EC)--often also referred to as OEIS (omphalocele, exstrophy, imperforate anus and spinal defects) complex--as the most severe form.
Role of imaging in antenatal diagnosis of bladder exstrophy--epispadias complex
Omphalocele was diagnosed in 3 male and 3 female calves.
Surgical management of abdominal affections--a clinical study of 39 calves