(ō-lek'ră-non, ō'lē-krā'non), [TA]
The prominent curved proximal extremity of the ulna, the upper and posterior surface of which gives attachment to the tendon of the triceps muscle, the anterior surface entering into the formation of the trochlear notch.
Synonym(s): elbow bone, olecranon process, point of elbow, tip of elbow
[G. the head or point of the elbow, fr. ōlenē, ulna, + kranion, skull, head]
Farlex Partner Medical Dictionary © Farlex 2012

(pros'es?) [L. processus, going forwards, an advance]
1. A method of action.
2. The state of progress of a disease.
3. A projection or outgrowth of bone or tissue.
4. A series of steps or events that lead to achievement of specific results.

The process of the cribriform plate of the ethmoid bone that articulates with the frontal bone.

Wing of the sphenoid bone.

The portion of the mandible and maxilla containing the tooth sockets. Synonym: alveolar bone

One of four small, flat processes (two superior and two inferior) by which vertebrae articulate with each other.

The narrow part of the base of the occipital bone, in front of the foramen magnum, articulating with the sphenoid bone. Synonym: pars basilaris ossis occipitalis

The process of the caudate lobe of the liver extending under the right lobe.

One of about 70 prominent meridional ridges projecting from the corona ciliaris of the choroid coat of the eye to which the suspensory ligament of the lens is attached. These have the same structure as the rest of the choroid and secrete aqueous humor, which nourishes neighboring parts, the cornea, and lens.

Any of three pairs of bony processes on the top of the body of the sphenoid bone, overhanging the edges of the sella turcica.

A posterior process on the superior border of the ramus of the mandible consisting of a capitulum and neck. It articulates with the mandibular fossa of the temporal bone.
See: mandible for illus

A beak-shaped process extending upward and laterally from the neck of the scapula. The coracoid process is not part of any bone-to-bone articulation although the coracoclavicular ligament holds the clavicle against the acromium of the scapula. The muscles attaching to the coracoid process are the pectoralis major, coracobrachialis, and the short head of the biceps brachii.
See: scapula

The standard or customary application of prevailing laws or rules and the protections that follow from their application.

A small process on the superior border of the inferior concha that articulates with the uncinate process of the ethmoid.

An extension of the posterior edge of the sacrotuberous ligament to the ramus of the ischium.

An upward projection of the maxilla that articulates with the frontal bone; forms part of the orbit and nasal fossa.

In the area of the primitive mouth of the embryo, a median swelling that is the precursor of the nose, upper lip, and front part of the palate.

The upward-projecting process of the zygomatic bone.

The part of the tunica vaginalis that covers the spermatic cord.

An axial strand of cells in vertebrate embryos extending forward from the primitive knot. It forms a primitive axis about which the embryo differentiates.

The part of the palatine bone that fuses with its counterpart at the midline to form the dorsal extension of the hard palate.

The medially projecting process of the zygomatic bone that articulates with the maxilla. It forms the inferior lateral margin of orbit.

A short process of the inferior concha that articulates with the lacrimal bone.

A knob on the incus, an auditory ossicle. articulating with the stapes.

A projection from the maxilla that articulates with the zygomatic bone.

The posterior portion of the first branchial arch from which the lower jaw develops.

A horn-shaped process of the mastoid portion of the temporal bone extending downward and forward behind the external auditory meatus. It serves for attachment of the sternocleidomastoid, splenius capitis, and longissimus capitis muscles.

1. The anterior portion of the first branchial arch, which, with medial nasal processes, forms the upper jaw.
2. The process of the inferior nasal concha extending laterally and covering the orifice of the antrum.
3. A process on the anterior border of the perpendicular portion of the palatine bone. 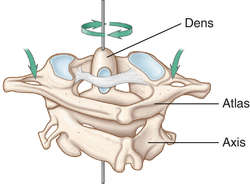 A toothlike process extending upward from the axis and about which the atlas rotates. Synonym: dens See: illustration

1. The process at the tip of the perpendicular portion of the palatine bone directed upward and backward.
2. The process of the zygomatic bone that forms the anterior boundary of the temporal fossa.

A process extending transversely from the medial surface of the maxilla. With the corresponding process from the other side, it forms the major portion of the hard palate.

The process of the temporal bone separating the mandibular fossa from the external acoustic meatus.

The process of the sphenoid bone extending downward from the junction of the body and great wing. It consists of the lateral and medial pterygoid plates, which are fused at the top. The top of the pterygoid process is pierced by the pterygoid canal.

The prominence at the posterior part of each vertebra.

The posteriormost part of a vertebra. This spine projects back and serves as a point of attachment for muscles of the back.

The process extending laterally and dorsally from the arch of a vertebra.

1. Long thin lamina of bone from the orbital plate of the ethmoid articulating with the inferior turbinate.
2. The hook at the anterior end of the hippocampal gyrus.
3. The hooked end of the unciform bone.

uncinate process of the ethmoid bone

A sickle-shaped bony process on the medial wall of the ethmoidal labyrinth below the concha.

The process of the arytenoid cartilage that serves for attachment of the vocal cord.

The lowest portion of the sternum; a sword-shaped cartilaginous process supported by bone. No ribs attach to the xiphoid process; however, some abdominal muscles are attached. The xiphoid process ossifies in the aged
Synonym: ensiform process; xiphisternum
Medical Dictionary, © 2009 Farlex and Partners

a projection of the mammalian ulna forming a process for the attachment of the triceps muscle and other muscles used to straighten the arm.
Collins Dictionary of Biology, 3rd ed. © W. G. Hale, V. A. Saunders, J. P. Margham 2005

Feedback
Flashcards & Bookmarks ?
Please log in or register to use Flashcards and Bookmarks. You can also log in with
Flashcards ?
My bookmarks ?
+ Add current page to bookmarks
Mentioned in ?
References in periodicals archive ?
Marked swelling about the left elbow was noted particularly at the olecranon process and common wrist extensor musculature.
Chiropractic management of elbow tendinopathy following a sports related trauma
The monitor measuring flexion/ extension was positioned at the approximate center of wrist thickness on the ulnar side slightly proximal to the styloid process, aligned with the ulnar aspect of the fifth metacarpal distally and the tip of the olecranon process proximally.
Quantification of wrist motions during scanning
* Triceps: Vertical fold, on the posterior midline of the upper arm, halfway between acromion and olecranon process
Effect of training on agility, flexibility, its correlation, and also its correlation with skin fold thickness and body mass index among runners
Ueh: antero-posterior width of proximal end, taken from the most extreme point of olecranon process to the most extreme point of coronoid process.
Postnatal Variation of Limb Bones in the Japanese Quail, Coturnix coturnix japonica/ Variacion Postnatal de Huesos de los Miembros en la Codorniz Japonesa, Coturnix coturnix japonica
Olecranon bursitis or capped elbow is inflammation of an acquired, subcutaneous bursa over the olecranon process of ulna i.e.
Olecranon bursitis and its surgical management in bullocks
The biceps skinfold thickness was measured as the thickness of a vertical fold raised on the anterior aspect of the arm, the triceps skinflold thickness was measured over the triceps muscle at a point midway between the lateral projection of the acromion process of scapula and the inferior margin of the olecranon process of ulna .The subscapular skinfold was picked up on a diagonal, inclined inferolaterally approximately 45c to the horizontal plane in the natural cleavage line of the skin.
Prediction equation for calculating fat mass in young Indian adults
Mid-arm circumference (MAC) (cm) was measured using a plastic tape at the mid-point between the acromion and olecranon process to the nearest 0.1 cm.
Fat malabsorption in elderly patients with cardiac cachexia
Importance of Accurate Reduction: Extension of the elbow joint is limited by the olecranon process locking in the olecranon fossa of humerus.
Clinical study of management of fracture of supracondylar humerus displaced Gartland type-III/unstable Gartland type-II in children's by closed reduction and percutaneous K-wire fixation
Forearm circumference: Forearm circumference was measured at midpoint between olecranon process of ulna and styloid process of radius bones by flexible measuring tape.
Study of correlation between hand circumference and maximum grip strength (MGS)
Trauma, Excessive movement of skin and tear the subcutaneous connective tissue over the olecranon process causes subcutaneous accumulation of transudative fluid that eventually, becomes encapsulated by fibrous tissue lined with a synovial like membrane (Shappel and Little, 1992).
Elbow hygroma and its surgical management in a horse
The smaller humeral head arises from the medial epicondyle of the humerus and larger ulnar head has an extensive origin from the medial margin of the olecranon process, proximal two thirds of posterior border of ulna, an aponeurosis which is common for FCU, extensor carpi ulnaris muscle and flexor digitorum profundus muscle and intermuscular septum between it and flexor digitorum superficialis muscle.
Ulnar and humeral heads forming separate bellies. A rare case of digastric flexor carpi ulnaris muscle/Cabezas Ulnar y humeral formando vientres separados. Un caso raro del musculo flexor ulnar del carpo digastrico