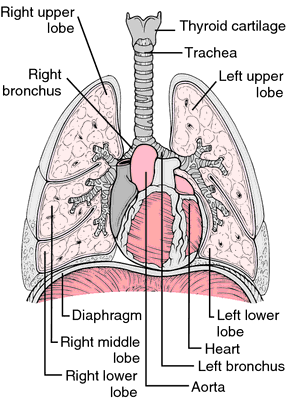 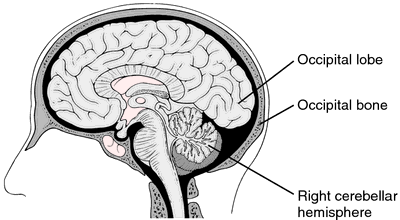 [TA]
the posterior, somewhat pyramid-shaped part of each cerebral hemisphere, demarcated by no distinct surface markings on the lateral convexity of the hemisphere from the parietal and temporal lobes, but sharply delineated from the parietal lobe by the parietooccipital sulcus on the medial surface.
Synonym(s): lobus occipitalis [TA], occipital lobe [TA]
Farlex Partner Medical Dictionary © Farlex 2012

The rear lobe of the main brain (cerebral hemisphere). The occipital lobe is concerned with vision.
Collins Dictionary of Medicine © Robert M. Youngson 2004, 2005

the posterior area of the CEREBRAL HEMISPHERE lying behind the parietal lobe and responsible for the interpretation of visual stimuli from the retina.
Collins Dictionary of Biology, 3rd ed. © W. G. Hale, V. A. Saunders, J. P. Margham 2005

Feedback
Flashcards & Bookmarks ?
Please log in or register to use Flashcards and Bookmarks. You can also log in with
Flashcards ?
My bookmarks ?
+ Add current page to bookmarks
Mentioned in ?
References in periodicals archive ?
Caption: Figure 1: Contrast-enhanced cranial CT demonstrating a hemorrhagic focus in the right parietal and occipital lobes with possible secondary bilateral infarction due to compression of posterior circulation vessels, subfalcine herniation, beginning uncal herniation, and cerebral edema.
Seizure and Acute Vision Loss in a Filipino Lupus Patient: A Case of Posterior Reversible Encephalopathy Syndrome with Intraparenchymal Hemorrhage
Significant main effects were found for type (F(3,54) = 12.69, p < 0.001; P2 amplitude for ellipse was significantly smaller than those for other figures (p <0.01)) and lobe (F(3, 54) = 26.61,p < 0.001; P2 amplitude in the temporal lobe was significantly smaller than that in the frontal lobe (p < 0.05) and that in the parietal lobe (p < 0.001), as well as that in the occipital lobe (p < 0.001)).
Direct Electrophysiological Mapping of Shape-Induced Affective Perception
Six features from three electrodes located at the occipital lobe were used in the binary classification modelling.
Excessive Crossed Disparity Detection by Visual Evoked Potentials to Reduce Visual Discomfort in 3D Viewing
Simple VH have most often been linked with the primary visual cortex in the occipital lobe while complex VH are more often associated with higher order visual association areas in the temporal lobe [10].
"Capgras" Delusions Involving Belongings, Not People, and Evolving Visual Hallucinations Associated with Occipital Lobe Seizures
People with Creutzfeldt-Jakob lose control of their limbs and their emotions - and, the&nbsp;Primary Care Companion&nbsp;article notes, could experience hallucinations when the condition affects the occipital lobe.
6 Weird Things That Can Cause Hallucinations
A corresponding fluid attenuated inversion recovery (FLAIR) image (FIGURE 1B) shows an abnormal parenchymal signal and hyperintensity in the left occipital lobe, which is the area of the stroke.
Case report
[11] Our case is probably the first CPP to be reported in the occipital lobe.
Intraparenchymal choroid plexus papilloma--a case report and literature review
In addition, the lateral ventricles were enlarged more prominently in the parietooccipital region, and a large encephalomalacic cyst was present in the right occipital lobe (Figures 2, C, and 3).
Zika Virus-Associated Micrencephaly: A Thorough Description of Neuropathologic Findings in the Fetal Central Nervous System
Our findings suggested that the whole occipital lobe was involved, including BA17 and BA18 areas and superior extrastriate areas.
Reduction of Interhemispheric Functional Brain Connectivity in Early Blindness: A Resting-State fMRI Study
38 Female Left temporal and parietal regions GUmUs and 55 Female Left middle cerebral artery Yilmaz territory Hashmi 57 Male Right middle cerebral artery territory Theeler and Ney 63 Male Right occipital lobe infarction Pena et al.
Vertebral Artery Thrombosis in Chronic Idiopathic Thrombocytopenic Purpura
"A doctor told me I had damaged my frontal temporal and occipital lobe in the brain.
'Nothing can't be solved' - soldier who considered suicide after Afghan tour
On MRI, FLAIR sequence showed bilateral and symmetrical hyperintensities in the posterior limb of the internal capsule, occipital lobe white matter, and splenium of the corpus callosum (Figure 1).
Heroin-associated spongiform leukoencephalopathy