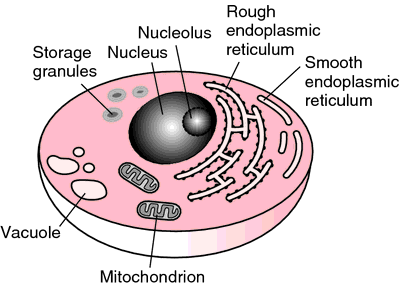 The nucleus and nucleolus of a cell. From Mahon and Manuselis, 2000.
nucleus ambi´guus the nucleus of origin of motor fibers of the glossopharyngeal, vagus, and accessory nerves in the medulla oblongata.
nucleus an´sae lenticula´ris (nucleus of ansa lenticularis) a collection of neurons in the ansa lenticularis as it curves around the medial edge of the globus pallidus.
arcuate nuclei of medulla oblongata, nu´clei arcua´ti medul´lae oblonga´tae small irregular areas of gray substance on the ventromedial aspect of the pyramid of the medulla oblongata.
atomic nucleus nucleus (def. 3).
basal nuclei (nu´clei basa´les) specific interconnected subcortical masses of gray matter embedded in each cerebral hemisphere and in the upper brainstem, comprising the corpus striatum (caudate and lentiform nuclei), amygdaloid body, claustrum, and external, extreme, and internal capsules. Called also basal ganglia.
caudal olivary nucleus a folded band of gray substance enclosing a white core, which produces the elevation on the medulla oblongata known as the olive.
caudate nucleus (nucleus cauda´tus) an elongated, arched gray mass closely related to the lateral ventricle throughout its entire extent, which, together with the putamen, forms the neostriatum.
nucleus ceru´leus a compact aggregation of pigmented neurons lying below the locus ceruleus.
cochlear nuclei, anterior and posterior the nuclei of termination of sensory fibers of the cochlear nerve (see anatomic Table of Nerves in the Appendices); they partly encircle the inferior cerebellar peduncle at the junction of the medulla oblongata and pons.
dentate nucleus (nucleus denta´tus) the largest of the deep cerebellar nuclei, lying in the white matter of the cerebellum just lateral to the emboliform nucleus.
droplet nuclei small particles of pathogen-containing respiratory secretions expelled into the air by coughing, which are reduced by evaporation to small, dry particles that can remain airborne for long periods; one possible mechanism for transmission of infection from one individual to another.
emboliform nucleus (nucleus embolifor´mis) a small cerebellar nucleus lying between the dentate nucleus and the globose nucleus and contributing to the superior cerebellar peduncles.
fastigial nucleus (nucleus fasti´gii) the most medial of the deep cerebellar nuclei, near the midline in the roof of the fourth ventricle.
globose nucleus (nucleus globo´sus) a cerebellar nucleus lying between the emboliform nucleus and the nucleus fastigii and projecting its fibers via the superior cerebellar peduncle.
intracerebellar nuclei four accumulations of gray matter embedded in the white matter of the cerebellum, comprising the dentate nucleus, emboliform nucleus, nucleus fastigii, and globose nucleus.
lenticular nucleus (lentiform nucleus) the part of the corpus striatum somewhat resembling a biconvex lens, divided into a larger external or lateral part called the putamen and a smaller light colored internal or medial part called the globus pallidus.
motor nucleus any collection of cells in the central nervous system giving origin to a motor nerve.
olivary nucleus a folded band of gray matter that encloses a white core and produces the elevation called the olive on the medulla oblongata; it receives heavy projections from the spinal cord, mesencephalon, and cerebral cortex and projects fibers via the contralateral inferior cerebellar peduncle.
nuclei of origin, nu´clei ori´ginis groups of nerve cells in the central nervous system from which arise the motor, or efferent, fibers of the cranial nerves.
paraventricular nucleus (nucleus paraventricula´ris) a band of cells in the wall of the third ventricle in the supraoptic part of the hypothalamus; many of its cells are neurosecretory in function and project to the neurohypophysis, where they secrete oxytocin (and, to a lesser extent, antidiuretic hormone).
pontine nuclei, nu´clei pon´tis masses of nerve cells scattered throughout the ventral part of the pons, in which the longitudinal fibers of the pons terminate, and whose axons in turn cross to the opposite side and form the middle cerebellar peduncle, which projects fibers to the neocerebellum.
nucleus pro´prius a column of large neurons that extends throughout the posterior horn of the spinal cord.
nucleus pulpo´sus (pulpy nucleus) a semifluid mass of fine white elastic fibers forming the center of an intervertebral disk.
red nucleus (nucleus ru´ber) an oval mass of gray matter (pink in fresh specimens) in the anterior part of the tegmentum and extending into the posterior part of the hypothalamus; it receives fibers from the cerebellum.
sensory nucleus the nucleus of termination of the afferent (sensory) fibers of a peripheral nerve.
supraoptic nucleus (nucleus supraop´ticus) one just above the lateral part of the optic chiasm; many of its cells are neurosecretory in function and project to the neurohypophysis, where they secrete antidiuretic hormone (ADH) and, to a lesser extent, oxytocin; other cells are osmoreceptors that stimulate ADH release in response to increased osmotic pressure.
tegmental nucleus, laterodorsal several nuclear masses of the reticular formations of the pons and midbrain, especially of the latter, where they are in close approximation to the superior cerebellar peduncles.
thoracic nucleus (nucleus thora´cicus) thoracic column.
vestibular nuclei, nu´clei vestibula´res the four cellular masses in the floor of the fourth ventricle: superior (rostral or cranial), lateral, medial, and inferior (caudal) vestibular nuclei; in them are the terminations of the branches of the vestibular nerve (see anatomic Table of Nerves in the Appendices). The nuclei give rise to a widely dispersed special sensory system through projections to motor nuclei in the brain stem and cervical cord, to the cerebellum, and to motor cells throughout the spinal cord; they also have connections that provide for conscious perception of, and autonomic reactions to, labyrinthine stimulation.
Miller-Keane Encyclopedia and Dictionary of Medicine, Nursing, and Allied Health, Seventh Edition. © 2003 by Saunders, an imprint of Elsevier, Inc. All rights reserved.

The pulpy core of the INTERVERTEBRAL DISC, that is surrounded by the ANNULUS FIBROSUS. Degeneration of the annulus and/or undue vertical stress may lead to some of the nucleus pulposus being squeezed (prolapsed) through the annulus. This usually occurs at the back of the disk and the prolapsed material may press on the nerve roots entering and leaving the spinal cord, causing severe pain and sometimes muscle weakness. The imprecise lay term for this process is ‘slipped disk’.
Collins Dictionary of Medicine © Robert M. Youngson 2004, 2005

The center portion of the intervertebral disk that is made up of a gelatinous substance.
Mentioned in: Chemonucleolysis, Herniated Disk
Gale Encyclopedia of Medicine. Copyright 2008 The Gale Group, Inc. All rights reserved.

Feedback
Flashcards & Bookmarks ?
Please log in or register to use Flashcards and Bookmarks. You can also log in with
Flashcards ?
My bookmarks ?
+ Add current page to bookmarks
Mentioned in ?
References in periodicals archive ?
20 [micro]g/mL [O.sub.3] significantly reversed the overexpression of PDE2A that was induced by autologous nucleus pulposus implantation (P < 0.05).
Low-Concentration Oxygen/Ozone Treatment Attenuated Radiculitis and Mechanical Allodynia via PDE2A-cAMP/cGMP-NF-[kappa]B/p65 Signaling in Chronic Radiculitis Rats
Wang et al., "Biological behavior of human nucleus pulposus mesenchymal stem cells in response to changes in the acidic environment during intervertebral disc degeneration," Stem Cells and Development, vol.
Effect of Compression Loading on Human Nucleus Pulposus-Derived Mesenchymal Stem Cells
Our results indicate that the ADC values of nucleus pulposus and annulus fibrosis decrease with age, these findings are in agreement with those of Kealey et al .,[24] who reported a decrease of 9% in ADC values as age increased.
Diffusion-weighted 7.0T Magnetic Resonance Imaging in Assessment of Intervertebral Disc Degeneration in Rats
Lin, "Three-dimensional culture of human nucleus pulposus cells in fibrin clot: comparisons on cellular proliferation and matrix synthesis with cells in alginate," Artificial Organs, vol.
Evaluation of Electrospun Nanofiber-Anchored Silicone for the Degenerative Intervertebral Disc
Nordborg, "Autologous nucleus pulposus induces neurophysiologic and histologic changes in porcine cauda equina nerve roots," Spine, vol.
Hyperexcitability in Spinal WDR Neurons following Experimental Disc Herniation Is Associated with Upregulation of Fractalkine and Its Receptor in Nucleus Pulposus and the Dorsal Root Ganglion
Kletsas, "Oxidative stress inhibits the proliferation, induces premature senescence and promotes a catabolic phenotype in human nucleus pulposus intervertebral disc cells," European Cells & Materials, vol.
Autophagy Is a Protective Response to the Oxidative Damage to Endplate Chondrocytes in Intervertebral Disc: Implications for the Treatment of Degenerative Lumbar Disc
Icariin Decreased IL-1[beta]-Induced Apoptosis Rate in Human Nucleus Pulposus Cells.
Icariin Prevents IL-1[beta]-Induced Apoptosis in Human Nucleus Pulposus via the PI3K/AKT Pathway
With percutaneous posterior endoscopic cervical intervertebral disc nucleus pulposus resections, the inner margin of the articular process is grinded with an abrasive drill to open a hole into the spinal canal.
Effective Range of Percutaneous Posterior Full-Endoscopic Paramedian Cervical Disc Herniation Discectomy and Indications for Patient Selection
MiR-27a regulates apoptosis in nucleus pulposus cells by targeting PI3K.
Effect of microRNA-21 on the proliferation of human degenerated nucleus pulposus by targeting programmed cell death 4
First, the annulus fibrosus, the outer structure that encases the nucleus pulposus, is composed of type 1 collagen organized in lammellae, which are obliquely oriented.
Current evidence of minimally invasive spine surgery in the treatment of lumbar disc herniations
The nucleus pulposus was modeled such a way that it occupied 43% of the total area of the disc [1].
Finite element modeling of spine diseases and deformities: recent trends in research and review of literature
The weakness and degeneration of fibrous ring and posterior longitidunal ligament may cause posterior herniation of nucleus pulposus towards the spinal canal.
The comparison of the efficacy of radiofrequency nucleoplasty and targeted disc decompression in lumbar radiculopathy