(nū-klē'ik as'id),
A family of macromolecules, of molecular masses ranging upward from 25,000, found in the chromosomes, nucleoli, mitochondria, and cytoplasm of all cells, and in viruses; in complexes with proteins, they are called nucleoproteins. On hydrolysis they yield purines, pyrimidines, phosphoric acid, and a pentose, either d-ribose or d-deoxyribose; from the last, the nucleic acids derive their more specific names, ribonucleic acid and deoxyribonucleic acid. Nucleic acids are linear (that is, unbranched) chains of nucleotides in which the 5'-phosphoric group of each one is esterified with the 3'-hydroxyl of the adjoining nucleotide.
Farlex Partner Medical Dictionary © Farlex 2012

(no͞o-klē′ĭk, -klā′-, nyo͞o-)
n.
Any of a class of large molecules that are polymers of nucleotides and are found in all living organisms and viruses. The principal nucleic acids, DNA and RNA, are the carriers of hereditary information and control the synthesis of proteins.
The American Heritage® Medical Dictionary Copyright © 2007, 2004 by Houghton Mifflin Company. Published by Houghton Mifflin Company. All rights reserved.

(nū-klē'ik as'id)
A family of macromolecules found in the chromosomes, nucleoli, mitochondria, and cytoplasm of all cells, and in viruses; in complexes with proteins, they are called nucleoproteins.
Medical Dictionary for the Health Professions and Nursing © Farlex 2012 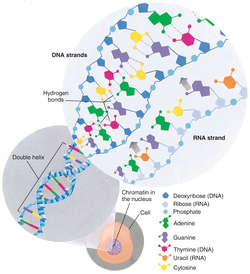 Any of the high-molecular-weight molecules that carry the genetic information crucial to the replication of cells and the manufacturing of cellular proteins. They have a complex structure formed of sugars (pentoses), phosphoric acid, and nitrogen bases (purines and pyrimidines). Most important are ribonucleic acid (RNA) and deoxyribonucleic acid (DNA). See: illustration
See also: acid
Medical Dictionary, © 2009 Farlex and Partners

DNA or RNA. A very long polymer molecule made up of MONOMERS of either deoxyribonucleotides or ribonucleotides, joined by PHOSPHODIESTER BONDS. Nucleic acids constitute the chromosomes of almost all living cells and, by virtue of the order of the contained purine and pyrimidine BASE PAIRS, manifest the genetic code.
Collins Dictionary of Medicine © Robert M. Youngson 2004, 2005

a molecule comprising a sequence of NUCLEOTIDES forming a POLYNUCLEOTIDE CHAIN. Nucleic acids act as the genetic material of cells and occur as either DNA or RNA.
Collins Dictionary of Biology, 3rd ed. © W. G. Hale, V. A. Saunders, J. P. Margham 2005

The cellular molecules DNA and RNA that act as coded instructions for the production of proteins and are copied for transmission of inherited traits.
Mentioned in: Sickle Cell Disease
Gale Encyclopedia of Medicine. Copyright 2008 The Gale Group, Inc. All rights reserved.

(nū-klē'ik as'id)
A family of macromolecules found in chromosomes, nucleoli, mitochondria, and cytoplasm of all cells; in complexes with proteins, called nucleoproteins.
Medical Dictionary for the Dental Professions © Farlex 2012

Feedback
Flashcards & Bookmarks ?
Please log in or register to use Flashcards and Bookmarks. You can also log in with
Flashcards ?
My bookmarks ?
+ Add current page to bookmarks
Mentioned in ?
References in periodicals archive ?
The variations of nucleic acid bases in rumen with lactation stages and time of sampling are shown in Table 5.
The relationship between odd- and branched-chain fatty acids and microbial nucleic acid bases in rumen
These differences in nucleic acid effective stability, arising from differences in sample purity that are hard to discern and in the exact parameters of the assay the sample will be used on, mean that it is virtually impossible to make any blanket statements about how many freeze-thaw cycles are "too many." What's acceptable, and what's not, will depend very much on the type of extractions prepared and their intended final use.
Freeze-thaw cycles and nucleic acid stability: what's safe for your samples?
Automation can benefit all sizes of a molecular biology laboratory relying on nucleic acid extraction processes.
Streamlining molecular biology through automation: automation reduces hands-on processing time and ensures consistency, accuracy and a streamlined extraction workflow
SELEX: a (r)evolutionary method to generate high-affinity nucleic acid ligands.
Aptameric molecular switch for cascade signal amplification
Nucleic acid: DNA or RNA (ie, genetic material made up of building blocks known as nucleotides).
Glossary
Some pathogen-fighting techniques the nucleic acids of genes and chromosomes to prevent infectious agents from replicating.
Getting the bugs out of blood: the quest for a zero-risk blood supply
The sensitivity and specificity of these tests are much better than with antigen detection and nucleic acid hybridization tests.
Nucleic Acid Test Simplifies Chlamydia Dx
A reactive functionality is present at the terminal end of the silane for covalent attachment of nucleic acids. The nucleic acids are synthesized on a commercial instrument in which one of the terminal ends of the nucleic acid has been modified with a short tether.
Nucleic acid biosensor technology in clinical diagnosis, pathogen detection and drug discovery
In 1909 the Russian-born American chemist Phoebus Aaron Theodore Levene (1869-1940) extracted a sugar from nucleic acid and identified it as ribose.
Ribose
M2 PHARMA-May 22, 2018-US, China, Australia Issue Aegea Biotechnologies Patents Related to Next Generation Nucleic Acid Clinical Diagnostic Technologies
US, China, Australia Issue Aegea Biotechnologies Patents Related to Next Generation Nucleic Acid Clinical Diagnostic Technologies
10 June 2016 - US-based nucleic acid synthesis specialist Integrated DNA Technologies has acquired oligonucleotide synthesis services firm ValueGene, Inc.
Integrated DNA Technologies Acquires Oligonucleotide Synthesis Firm ValueGene
Prior exposure of the specimen to other substances such as formalin can also greatly reduce polymerase activity on the sample nucleic acids, although in this case it's via an indirect mechanism (covalent cross-links on the nucleic acid molecules) and not something which can be overcome by simple purification of the nucleic acids.
Sample extraction methods: how we obtain DNA and RNA