A nosebleed is bleeding from the nose; the medical term for it is epistaxis.

Unexpected bleeding from anywhere is cause for alarm. Persistent bleeding should always be investigated because it may be the earliest sign of cancer. Fortunately, nosebleeds are rarely a sign of cancer. A much more common cause of nosebleeds is injury from picking or blowing or fisticuffs. People with hay fever have swollen membranes that are fragile and more likely to bleed.
Most nosebleeds (about 90%) come from the front of the septum, that plane of cartilage that separates the nostrils. These are called anterior nosebleeds. The lower front part of the septum has a mass of blood vessels on either side called Kiesselbach's plexus that is easy to injure. Nosebleeds from the more remote reaches of the nose are called posterior nosebleeds. They are less common, are less likely to have a benign cause, and are much harder to manage.
Nosebleeds are most likely to occur in children between the ages of two and 10 years, in part because younger children frequently insert small objects in the nose or pick at the tissues lining the nose. Nosebleeds in adolescents may indicate cocaineabuse. Nosebleeds in older adults may result from arteriosclerosis or high blood pressure.

Nosebleeds may result from a number of different causes:

The first treatment is to pinch the patient's nostrils together, have them sit forward, and ask them to stay that way for 5-10 minutes. This method usually stops nosebleeds originating in Kiesselbach's plexus. The patient should not tilt his or her head backward, as this position may cause blood to drip backward into the throat or windpipe. It is best to hold the head upright.
In the case of small children, the doctor may examine the inside of the nose to check for foreign bodies, evidence of scratching or picking, etc. Small foreign bodies (watch batteries, dried peas or beans, buttons, etc.) can be removed by suction if necessary. The doctor may also have to remove clotted blood by suction.
Bleeding that continues originates from the back of the nose in most cases and will flow down the throat. If that happens, emergency intervention is needed.
As an emergency procedure, the nose will be packed front and/or back with cotton gauze and a rubber balloon from a Foley catheter. This treatment is not comfortable. Having no place to flow, the blood should clot, giving the ear, nose and throat specialists (otorhinolaryngologists) a chance to find the source and permanently repair it. If the packing has to remain for any length of time, antibiotics and pain medication will be necessary—antibiotics because the sinuses will be plugged up and prone to infection. Nose packing may so interfere with breathing that the patient will need supplemental oxygen.
Newer options for controlling posterior nosebleeds include the use of Surgicel, Merocel, or other oxidized cellulose products that expand with moisture. These may control the bleeding without the need for bulky nasal packing.
Many bleeds are from small exposed blood vessels with no other disease. They can be destroyed by cautery, usually done by applying silver nitrate to the affected area. Larger vessels may not respond to cautery. The surgeon may have to tie them off, which is known as ligation. Another technique that is sometimes used with larger vessels is embolization, in which the doctor injects a chemical to block or close the blood vessel.

Estrogen cream, the same preparation used to revitalize vaginal tissue, can toughen fragile blood vessels in the anterior septum and forestall the need for cauterization. Botanical medicines known as styptics, which slow down and can stop bleeding, may be taken internally or applied topically. Some of the plants used are achillea (yarrow), trillium, geranium, and shepherd's purse (capsella-bursa). Homeopathic remedies can be one of the quickest and most effective treatments for epistaxis.

Both before and after a nosebleed, the patient should blow the nose gently and avoid picking or scratching the tissues that line it. Children with recurrent nosebleeds during heating season may benefit from the use of a cool-mist vaporizer to humidify the bedroom at night, or from the application of a small quantity of petroleum jelly to the inside of each nostril. Treatment of hay fever helps reduce the fragility of the tissues.

Cautery — The use of heat, electricity, or chemicals to destroy tissue.
Embolization — A technique for stopping bleeding by introducing a substance into larger blood vessels that blocks or closes them.
Epistaxis — The medical term for nosebleed.
Kiesselbach's plexus — An area on the anterior part of the nasal septum that has a rich supply of blood vessels and is a common site of nosebleeds. It is named for Wilhelm Kiesselbach, a nineteenth-century German otolaryngologist.
Septum — The partition that separates the two nostrils. It consists of membranes, cartilage, and bone.
Styptic — Any remedy with an astringent and hemo-static (stopping bleeding) quality.
Gale Encyclopedia of Medicine. Copyright 2008 The Gale Group, Inc. All rights reserved.

[ep″ĭ-stak´sis]
hemorrhage from the nose, usually due to rupture of small vessels overlying the anterior part of the cartilaginous nasal septum. Minor bleeding may be caused by a blow on the nose, irritation from foreign bodies, or vigorous nose-blowing during a cold; sometimes it occurs in connection with menstruation. If bleeding persists in spite of first aid measures, medical attention is advisable. Called also nosebleed.

Sometimes nosebleed has serious underlying causes. Arteriosclerosis is a possible cause in the elderly. Polyps, other fleshy growths in the nose, food allergy, hypertension, vitamin deficiencies, or a disease producing a bleeding tendency may produce nosebleed. If the nose bleeds often or profusely, or if the bleeding is difficult to stop, a health care provider should be consulted.

Bleeding from the nose that does not originate in the nose itself is a serious indication that some damage has been done internally, either by injury or disease. Medical attention is necessary to trace the bleeding to its source. The blood probably originates in the stomach, the lungs, within the skull, or in passages related to these parts.

First Aid Measures: The victim should sit up with the head tilted forward to avoid aspiration of blood. The soft portion of the nose is grasped firmly between the thumb and forefinger, for 5 to 15 minutes. Once bleeding stops the patient should rest for an hour or so and for several hours should avoid stooping, lifting, or vigorously blowing the nose. If bleeding continues, a health care provider may have to pack the nose. Sometimes cauterization of the bleeding vessel is necessary. In some cases surgery to clip the vessels may be done. Blood loss from a nosebleed can be considerable and there is danger of hemorrhagic shock.
Miller-Keane Encyclopedia and Dictionary of Medicine, Nursing, and Allied Health, Seventh Edition. © 2003 by Saunders, an imprint of Elsevier, Inc. All rights reserved.

(ep'i-stak'sis)
Profuse bleeding from the nose.
Synonym(s): nosebleed.
[G. fr. epistazō, to bleed at the nose, fr. epi, on, + stazō, to fall in drops]
Medical Dictionary for the Health Professions and Nursing © Farlex 2012 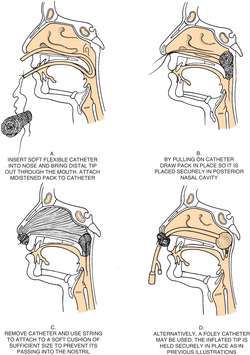 TECHNIQUE FOR CONTROL OF HEMORRHAGE FROM POSTERIOR NASAL CAVITY

TECHNIQUE FOR CONTROL OF HEMORRHAGE FROM POSTERIOR NASAL CAVITY

(ep'i-stak'sis)
Bleeding from the nose.
[G. fr. epistazō, to bleed at the nose, fr. epi, on, + stazō, to fall in drops]
Medical Dictionary for the Dental Professions © Farlex 2012

Q. Why do litlle kids' nose's begin to bleed?

A. A nose starts to bleed when one of the small veins in its lining bursts. This is usually caused by something completely harmless, such as the child picking their nose, blowing it too hard or having their nose knocked while playing. Another reason could be that the child has pushed something inside their nose. Some children have veins that are closer to the mucous membrane of their nose than other children. Because the veins are very close to the skin, they are more likely to burst when the child picks, blows or rubs their nose, or plays rough games.

A. I don’t have an idea about this. But I think that you should first discuss these issues with your doctor. Also mention to the doctor if she has any problems with sleeping, like only sleeping 6 hours a night. Try with occupational Therapists which help children and adults with small motor issues like handwriting and also with sensory issues like learning how to calm down. Early intervention is always best.

Q. My son often has severe nose bleeds. What if any illness' holds this symptom? They wake him in the night. My son has these terrible nose bleeds and I am sooo worried. I have no health insurance and would appreciate some info if anyone has any. Since he was about 4, now 12, he usually has them in the middle of the night. He does have allergies and takes over the counter allergy meds for seasonal allergies. He also has a heat lamp in his bedroom for his dragon. However; I never thought the lamp could cause this because they started 5 years before he had his dragon that uses the heat lamp. I am very worried it could be serious. Any info would be appreciated.

A. does it happen when the allergy attack occur? because it can cause nose bleeding. does he have a bleeding problem? when he get's a cut, how long it takes until the bleeding stops?
deviated septum in the nose can also cause...
but my nephew has seasonal allergies, and he bleed from his nose sometimes. so i guess it's common.
More discussions about nosebleed
This content is provided by iMedix and is subject to iMedix Terms. The Questions and Answers are not endorsed or recommended and are made available by patients, not doctors.

Feedback
Flashcards & Bookmarks ?
Please log in or register to use Flashcards and Bookmarks. You can also log in with
Flashcards ?
My bookmarks ?
+ Add current page to bookmarks
Mentioned in ?
References in periodicals archive ?
"Which one of you has nosebleeds?" she remembers the hematologist asking.
It was a nosebleed, caused by desert air. Or was it?
He basically had a nosebleed, which wouldn't stop, and he was in pain.
Friend claims Man U manager Ferguson won't step down any time soon
"Nosebleeds are a common problem for children who have allergies.
Ask Dr. Cory
I have noticed that he has had a couple of nosebleeds recently.
What is the cause of nosebleeds in dogs?
Both actually and factually, this depicts a very common first-aid myth, that to treat a nosebleed one should tilt the head back.
Pakistan: Myth buster: Under the nose
"She had to come home with irritated eyes and throat, and a nosebleed.
Pupil on rampage with pepper spray; INQUIRY: Seven children treated after attacks during school's lunch-break
His theory based on his own research was that nosebleeds in such situations in healthy infants could only be caused by inflicted trauma, the panel heard.
Doctor apologises to Sally Clark for wording of murder accusation
L/Cpl Croucher was thrown in the air but suffered nothing more than a bad nosebleed.
George Cross for blast hero
It seems that during a show for his 40th anniversary of performing in Las Vegas, Jones got a nosebleed four or five songs into his show.
Tom's nose
My realization about the evils of nicotine came one summer day in 1985 when I developed a nosebleed that just wouldn't stop.
Kicking the habit
IT was invented to help elderly nosebleed sufferers in Liverpool's casualty wards.
Take a break and carry on!
Colds and allergies can cause swelling and irritation inside the nose, which can lead to a nosebleed. The linings of the nose may also get dry and irritated from breathing cold or dry air such as heated air in the winter.
Ask Doctor Cory