[loo´ko-sīt]
a type of blood cell that lacks hemoglobin and is therefore colorless. Leukocytes are larger in size and fewer in number than erythrocytes; normally the blood has about 8000 of them per mm3. In contrast to erythrocytes, leukocytes can move about under their own power with ameboid movement. Their chief functions are to act as scavengers and to help fight infections. Called also white cell or corpuscle and white blood cell or corpuscle. adj., adj leukocyt´ic.

Leukocytes are actively engaged in the destruction or neutralization of invading microorganisms and are quickly transported to the vicinity of infection or inflammation, so that they can move through the blood vessel wall to reach the site of injury. For this reason, their life span in the blood is usually very short. When infection is present their numbers are greatly increased and they also become more mobile and move back and forth between the blood, lymph, and tissues. The granulocytes and monocytes are phagocytic, swallowing or ingesting the foreign particles with which they come in contact. During the process of phagocytosis the phagocytes themselves are destroyed. The two types of lymphocytes involved in immunity are B lymphocytes (B cells), which play a role in humoral immunity, and T lymphocytes (T cells), which are important in cell-mediated immunity. Plasma cells are activated B cells that secrete antibodies. Monocytes are also involved in some immune processes. 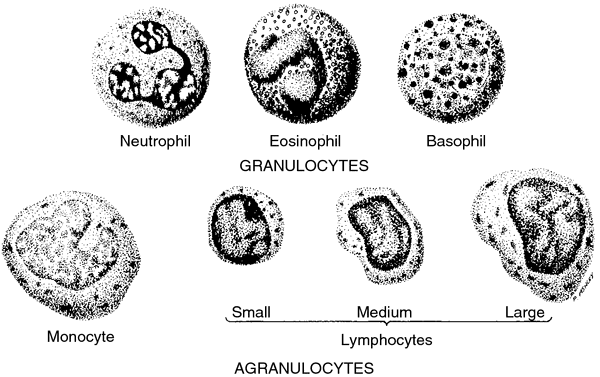 a neutrophilic granulocyte, the most frequent of the polymorphonuclear leukocytes, and also the most active phagocyte among the various types of white blood cells; when treated with Wright stain (or similar preparations), the fairly abundant cytoplasm is faintly pink, and numerous tiny, slightly refractile, relatively bright pink or violet-pink, diffusely scattered granules are recognizable in the cytoplasm; the deeply stained blue or purple-blue nucleus is sharply distinguished from the cytoplasm and is distinctly lobated, with thin strands of chromatin connecting the three to five lobes.
Farlex Partner Medical Dictionary © Farlex 2012

(nū'trō-fil'ik lū'kō-sīt)
A neutrophilic granulocyte, the most frequent of the polymorphonuclear leukocytes, and also the most active phagocyte among the various types of white blood cells; when treated with Wright stain the fairly abundant cytoplasm is faintly pink, and numerous tiny pink or violet-pink granules are recognizable in the cytoplasm; the deeply stained blue nucleus is sharply distinguished from the cytoplasm and is distinctly lobated, with thin strands of chromatin connecting the three to five lobes.
Medical Dictionary for the Health Professions and Nursing © Farlex 2012

Neutrophils, 55% to 70% of all leukocytes, are the most numerous phagocytic cells and are a primary effector cell in inflammation. Eosinophils, 1% to 3% of total leukocytes, destroy parasites and are involved in allergic reactions. Basophils, less than 1% of all leukocytes, contain granules of histamine and heparin and are part of the inflammatory response to injury. Monocytes, 3% to 8% of all leukocytes, become macrophages and phagocytize pathogens and damaged cells, esp. in the tissue fluid. Lymphocytes, 20% to 35% of all leukocytes, have several functions: recognizing foreign antigens, producing antibodies, suppressing the immune response to prevent excess tissue damage, and becoming memory cells.

Leukocytes are the primary effector cells against infection and tissue damage. They not only neutralize or destroy organisms, but also act as scavengers, engulfing damaged cells by phagocytosis. Leukocytes travel by ameboid movement and are able to penetrate tissue and then return to the bloodstream. Their movement is directed by chemicals released by injured cells, a process called chemotaxis. After coming in contact with and recognizing an antigen, neutrophils or macrophages phagocytize (engulf) it in a small vacuole that merges with a lysosome, to permit the lysosomal enzymes to digest the phagocytized material. When leukocytes are killed along with the pathogenic organisms they have destroyed, the resulting material is called pus, commonly found at the site of localized infections. Pus that collects because of inadequate blood or lymph drainage is called an abscess.

Microscopic examination: Leukocytes can be measured in any bodily secretion. They are normally present in blood and, in small amounts, in spinal fluid and mucus. The presence of leukocytes in urine, sputum, or fluid drawn from the abdomen is an indication of infection or trauma. The type of WBC present is identified by the shape of the cell or by the use of stains (Wright's) to color the granules: granules in eosinophils stain red, those in basophils stain blue, and those in neutrophils stain purple.

Clinically, WBC counts are important in detecting infection or immune system dysfunction. The normal WBC level is 5000 to 10,000/mm3. An elevated (greater than 10,000) leukocyte count (leukocytosis) indicates an acute infection or inflammatory disease process (such as certain types of leukemia), whereas a decrease in the number of leukocytes (less than 5000) indicates either immunodeficiency or an overwhelming infection that has depleted WBC stores. In addition to the total WBC count, the differential count is also frequently important. A differential count measures the percent of each type of WBC (e.g., neutrophils, monocytes, lymphocytes). The differential also measures the number of immature cells of each cell type as an indication of production by the bone marrow. Immature cells are called “blasts” (e.g., lymphoblasts, myeloblasts). During infections or in certain types of leukemia, blasts may be present in peripheral blood. See: inflammation

A leukocyte containing granules in cytoplasm.

A neutrophilic leukocyte of certain animals whose granules stain with an acid stain.