, neutrophile (nū'trō-fil, -fīl),
1. A mature white blood cell in the granulocytic series, formed by myelopoietic tissue of the bone marrow (sometimes also in extramedullary sites), and released into the circulating blood, where they normally represent 54-65% of the total number of leukocytes. When stained with the usual Romanowsky-type dyes neutrophils are characterized by a nucleus dark purple-blue nucleus, lobated (three to five distinct lobes joined by thin strands of chromatin), with a rather coarse network of fairly dense chromatin; and a cytoplasm that is faintly pink (sharply contrasted with the nucleus) that contains numerous fine pink or violet-pink granules, that is, not acidophilic or basophilic (as in eosinophils or basophils). The precursors of neutrophils, in order of increasing maturity, are: myeloblasts, promyelocytes, myelocytes, metamyelocytes, and band forms. Although the terms neutrophilic leukocytes and neutrophilic granulocytes include younger cells in which neutrophilic granules are recognized, the two expressions are frequently used as synonyms for neutrophils, which are mature forms unless otherwise indicated by a modifying term, such as immature neutrophil.
See also: leukocyte, leukocytosis.
2. Any cell or tissue that manifests no special affinity for acid or basic dyes, that is, the cytoplasm stains approximately equally with either type of dye.
[neutro- + G. philos, fond]
Farlex Partner Medical Dictionary © Farlex 2012

, neutrophile (nū'trō-fil, -fīl)
1. A mature white blood cell in the granulocytic series, formed by bone marrow and released into the circulating blood, where neutrophils normally represent from 54 to 65% of the total number of leukocytes in a differential. When stained, neutrophils are characterized by: 1) a nucleus that is dark purple-blue and lobated; 2) a cytoplasm that is faintly pink and contains numerous fine pink or violet-pink granules. The precursors of neutrophils in order of increasing maturity, are: myeloblasts, promyelocytes, myelocytes, metamyelocytes, and band forms.
See also: leukocyte, leukocytosis
2. Any cell or tissue that manifests no special affinity for acid or basic dyes, i.e., the cytoplasm stains approximately equally with either type of dye.
[neutro- + G. philos, fond]
Medical Dictionary for the Health Professions and Nursing © Farlex 2012 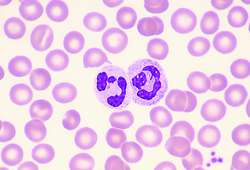 A white blood cell of the granulocyte group, with a multilobed (polymorph) nucleus and numerous granules in the CYTOPLASM that stain neither red with eosin nor blue with basic dyes. Neutrophils are the major circulating PHAGOCYTES of the granulocyte group. Compare EOSINOPHIL and BASOPHIL.
Collins Dictionary of Medicine © Robert M. Youngson 2004, 2005

the most common type of white blood cell (LEUCOCYTES) formed in the bone marrow and with a normal count in human blood of between 2500 and 7500 cells per mm3. They have lobed nuclei and granular cytoplasm. Neutrophils are PHAGOCYTES, and are important in combating bacterial infections.
Collins Dictionary of Biology, 3rd ed. © W. G. Hale, V. A. Saunders, J. P. Margham 2005

Feedback
Flashcards & Bookmarks ?
Please log in or register to use Flashcards and Bookmarks. You can also log in with
Flashcards ?
My bookmarks ?
+ Add current page to bookmarks
Mentioned in ?
References in periodicals archive ?
GM-CSF and G-CSF Both Enhance the Neutrophil Migration in RA.
Neutrophil Function in an Inflammatory Milieu of Rheumatoid Arthritis
Priming of the neutrophil respiratory burst: Role in host defense and inflammation.
The Effect of Hemodialysis on the Expression of CXCL8 and its mRNA in Neutrophils of the Patients with Chronic Renal Failure
Inflammatory cytokines which released by inflammatory cells after stimulus may interact with neutrophil and lymphocyte production in bone marrow.
Neutrophil to Lymphocyte Ratio is Useful in Differentiation of Malign and Benign Thyroid Nodules
A minimum of 300 neutrophils and myeloid precursors from each bone marrow aspirate smear and 20 neutrophils from each peripheral blood smear were screened.
Howell-Jolly Body-Like Inclusions in Neutrophils of Patients With Myelodysplastic Syndrome: A Novel Correlation
that neutrophil and lymphocyte counts and NLR were significantly higher in patients with acute ischemic and haemorrhagic stroke than in transient ischemic attack patients.5
Analysis of Neutrophil/Lymphocyte ratio and Thiol/Disulfide homeostasis parameters in patients admitted to the emergency department with ischemic stroke
The present study has shown that various CBC parameters, including WBC, neutrophil, and platelet counts; plateletcrit level; and NLR and PLR ratios, were significantly higher in ECs with LNI.
Can Preoperative Complete Blood Count Parameters Be Used as Predictive Markers for Lymph Node Metastasis in Endometrial Carcinomas?
They perform crucial effects on cell proliferation, neutrophil recruitment, and enhanced pro-inflammatory cytokines' release.[22],[23],[24] In addition, MIP-1a was mainly produced by hematopoietic cells (such as monocytes, macrophages, T lymphocytes, and B lymphocytes), and MIP-2 was secreted by both hematopoietic cells and nonhematopoietic cells.[25] Therefore, a possible reason why PDX could not regulate the release of MIP-2 may be associated with its binding on selective or specific cells.
Protectin DX Exhibits Protective Effects in Mouse Model of Lipopolysaccharide-Induced Acute Lung Injury
To make the neutrophil nanosponges, the researchers first developed a method to separate neutrophils from whole blood.
Researchers develop neutrophil 'nanosponges' to cure arthritis
(2007) 'Novel cell death program leads to neutrophil extracellular traps.
Formation of Neutrophil Extracellular Traps against Infection and During Inflammation: Boon or a Bane?
Some of the neutrophils in the tumor cells revealed degenerative changes by high-power field (x1000) microscopic evaluation (Figures 2-4), while some neutrophils included apoptotic bodies.
Significant Neutrophilic Emperipolesis in Squamous Cell Carcinoma
In May 2011, treatment with antibiotics was associated with slight fever, elevated serum CRP, and continuous elevation of neutrophil CD64 (up to 18,831 molecules/cell) (Figure 3).
Clinical Utility of Neutrophil CD64 to Detect Extrapulmonary Tuberculosis in Three Patients with Rheumatoid Arthritis Undergoing Treatment with Biologics
Ficoll-Paque for neutrophil isolation was obtained from Pharmacia (Uppsala, Sweden).
Neutrophils Release Metalloproteinases during Adhesion in the Presence of Insulin, but Cathepsin G in the Presence of Glucagon