Neurofibromatosis (NF), or von Recklinghausen disease, is a genetic disease in which patients develop multiple soft tumors (neurofibromas). These tumors occur under the skin and throughout the nervous system.

Neural crest cells are primitive cells which exist during fetal development. These cells eventually turn into:
In neurofibromatosis, a genetic defect causes these neural crest cells to develop abnormally. This results in numerous tumors and malformations of the nerves, bones, and skin.
Neurofibromatosis occurs in about one of every 4,000 births. Two types of NF exist, NF-1 (90% of all cases), and NF-2 (10% of all cases).

Both forms of neurofibromatosis are caused by a defective gene. NF-1 is due to a defect on chromosome 17; NF-2 results from a defect on chromosome 22. Both of these disorders are inherited in a dominant fashion. This means that anybody who receives just one defective gene will have the disease. However, a family pattern of NF is only evident for about half of all cases of NF. The other cases of NF occur due to a spontaneous mutation (a permanent change in the structure of a specific gene). Once such a spontaneous mutation has been established in an individual, however, it is then possible to be passed on to any offspring. The chance of a person with NF passing on the NF gene to a child is 50%.
NF-1 has a number of possible signs and can be diagnosed if any two of the following are present:
There are very high rates of speech impairment, learning disabilities, and attention deficit disorder in children with NF-1. Other complications include the development of a seizure disorder, or the abnormal accumulation of fluid within the brain (hydrocephalus). A number of cancers are more common in patients with NF-1. These include a variety of types of malignant brain tumors, as well as leukemia, and cancerous tumors of certain muscles (rhabdomyosarcoma), the adrenal glands (pheochromocytoma), or the kidneys (Wilms' tumor).
Patients with NF-2 do not necessarily have the same characteristic skin symptoms (café-au-lait spots, freckling, and neurofibromas of the skin) that appear in NF-1. The characteristic symptoms of NF-2 are due to tumors along the acoustic nerve. Interfering with the function of this nerve results in the loss of hearing; and the tumor may spread to neighboring nervous system structures, causing weakness of the muscles of the face, headache, dizziness, poor balance, and uncoordinated walking. Cloudy areas on the lens of the eye (called cataracts) frequently develop at an unusually early age. As in NF-1, the chance of brain tumors developing is unusually high.

Diagnosis is based on the symptoms outlined above. Diagnosis of NF-1 requires that at least two of the listed signs are present. Diagnosis of NF-2 requires the presence of either a mass on the acoustic nerve or another distinctive nervous system tumor. An important diagnostic clue for either NF-1 or NF-2 is the presence of the disorder in a patient's parent, child, or sibling.
Monitoring the progression of neurofibromatosis involves careful testing of vision and hearing. X-ray studies of the bones are frequently done to watch for the development of deformities. CT scans and MRI scans are performed to track the development/progression of tumors in the brain and along the nerves. Auditory evoked potentials (the electric response evoked in the cerebral cortex by stimulation of the acoustic nerve) may be helpful to determine involvement of the acoustic nerve, and EEG (electroencephalogram, a record of electrical currents in the brain) may be needed for patients with suspected seizures.

There are no available treatments for the disorders which underlie either type of neurofibromatosis. To some extent, the symptoms of NF-1 and NF-2 can be treated individually. Skin tumors can be surgically removed. Some brain tumors, and tumors along the nerves, can be surgically removed, or treated with drugs (chemotherapy) or x-ray treatments (radiation therapy). Twisting or curving of the spine and bowed legs may require surgical treatment, or the wearing of a special brace.

Prognosis varies depending on the types of tumors which an individual develops. As tumors grow, they begin to destroy surrounding nerves and structures. Ultimately, this destruction can result in blindness, deafness, increasingly poor balance, and increasing difficulty with the coordination necessary for walking. Deformities of the bones and spine can also interfere with walking and movement. When cancers develop, prognosis worsens according to the specific type of cancer.

There is no known way to prevent the approximately 50% of all NF cases which occur due to a spontaneous change in the genes (mutation). New cases of inherited NF can be prevented with careful genetic counseling. A person with NF can be made to understand that each of his or her offspring has a 50% chance of also having NF. When a parent has NF, and the specific genetic defect causing the parent's disease has been identified, tests can be performed on the fetus (developing baby) during pregnancy. Amniocentesis or chorionic villus sampling are two techniques which allow small amounts of the baby's cells to be removed for examination. The tissue can then be examined for the presence of the parent's genetic defect. Some families choose to use this information in order to prepare for the arrival of a child with a serious medical problem. Other families may choose not to continue the pregnancy.

Chromosome — A structure within the nucleus of every cell, which contains genetic information governing the organism's development.
Mutation — A permanent change to the genetic code of an organism. Once established, a mutation can be passed on to offspring.
Neurofibroma — A soft tumor usually located on a nerve.
Tumor — An abnormally multiplying mass of cells.

[noor″o-fi″bro-mah-to´sis]
a genetic disorder characterized by tumor growth along various types of nerves; bone, muscle, and skin may also be affected. There are two types: Type I (called also Recklinghausen's or von Recklinghausen's disease) is characterized by developmental changes in the nervous system, muscles, bones, and skin with formation of neurofibromas over the entire body and patches of pigmentation; scoliosis may also be associated. Half of those with the disorder have some form of learning disability. Type II (called also bilateral acoustic neurofibromatosis) is a benign tumor that forms intracranially or intraspinally, usually associated with the eighth cranial nerve (see also acoustic neuroma). Information and support for individuals with neurofibromatosis and those caring for them can be obtained by writing to the National Neurofibromatosis Foundation, 95 Pine St., 16th Floor, New York, NY 10005 or consulting their web site at http://www.nf.org. 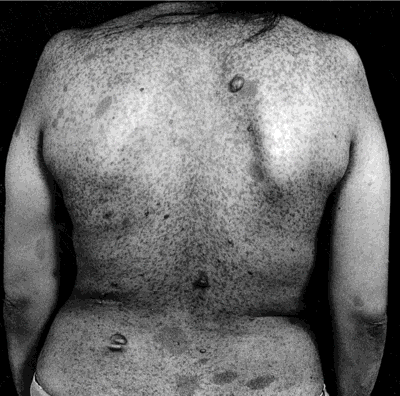 A patient with neurofibromatosis type I showing truncal freckling, café au lait spots, and multiple neurofibromas. From Mueller and Young, 2001.

(nū'rō-fi'brō-mă-tō'sis),
Heading comprises two distinct hereditary disorders, formerly labeled peripheral and central neurofibromatosis, but now entitled neurofibromatosis type I and type II. Type I (peripheral) neurofibromatosis, [MIM*162200] by far the more common of the two types, is characterized clinically by the combination of patches of hyperpigmentation and cutaneous and subcutaneous tumors. The hyperpigmented skin areas, present from birth and found anywhere on the body surface, can vary markedly in size and color: those that are dark brown are called café-au-lait spots. The multiple cutaneous and subcutaneous tumors, called neurofibromas, can develop anywhere along the peripheral nerve fibers, from the roots distally. Neurofibromas can become large, causing major disfigurement, eroding bone, and compressing various peripheral nerve structures; a small hamartoma (Lisch nodule) can be found in the iris of almost all patients. Type I neurofibromatosis, also called von Recklinghausen disease, has autosomal dominant inheritance, with the gene locus on chromosome 17q11, and is caused by mutation in the NF1 gene that encodes neurofibromin. Type II (central) neurofibromatosis [MIM*101000] has few cutaneous manifestations, and consists primarily of bilateral (less often, unilateral) acoustic neuromas, causing deafness, often accompanied by other intracranial and paraspinal neoplasms, such as meningiomas and gliomas. Type II neurofibromatosis also has autosomal dominant inheritance, but the gene locus is on 22q11, caused by mutation in the NF2 gene encoding the product merlin.

(no͝or′ō-fī′brō-mə-tō′sĭs, nyo͝or′-)
n. Abbr. NF
Any of several genetic diseases characterized by the development of benign tumors of the nerves and, in the most common form, associated with abnormal skin pigmentation and bone deformities.

(nūr'ō-fī-brō-mă-tō'sis)
Two distinct major hereditary disorders called type 1 and type 2. Type 1 (peripheral) neurofibromatosis, by far the more common, is characterized by patches of hyperpigmentation and both cutaneous and subcutaneous tumors. Hyperpigmented skin areas, present from birth, are called café-au-lait spots. The cutaneous and subcutaneous tumors, nerve sheath neoplasms called neurofibromas, can develop anywhere along the peripheral nerves. Neurofibromas can become large enough to cause disfigurement, erode bone, and compress peripheral nerves. If a hamartoma is found in the iris of affected patients, the disease is called von Recklinghausen disease. Type 2 (central) neurofibromatosis has few cutaneous manifestations, and consists primarily of acoustic neuromas that can cause deafness, often accompanied by other intracranial/paraspinal neoplasms, such as meningiomas and gliomas.
Synonym(s): elephant man disease (2) .

A genetic disease of dominant inheritance or caused by new mutations, featuring multiple soft tumours of the fibrous sheaths of nerves in the skin and elsewhere. There may be hundreds of these. The central nervous system may be involved with tumours in the brain or spinal cord. Mental retardation, usually mild, occurs in some cases. Also known as von Recklinghausen's disease. (Friedrich Daniel von Recklinghausen, 1833–1910, German pathologist).

(nūr'ō-fī-brō-mă-tō'sis)
One of two distinct hereditary disorders: neurofibromatosis type I and type II. Type I (von Recklinghausen disease), is more common and characterized clinically by the combination of patches of hyperpigmentation and cutaneous and subcutaneous tumors. Type II has few cutaneous manifestations, and consists primarily of bilateral acoustic neuromas, causing deafness.