[na″zo-la´be-al]
pertaining to, or extending between, the nose and lip. 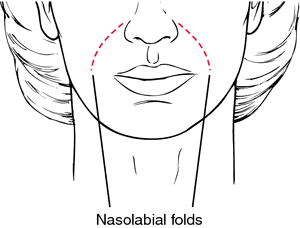 In the nasolabial region are lines or creases that run between the nose and mouth and should be assessed for symmetry. From Lammon et al., 1996.
Miller-Keane Encyclopedia and Dictionary of Medicine, Nursing, and Allied Health, Seventh Edition. © 2003 by Saunders, an imprint of Elsevier, Inc. All rights reserved.

Feedback
Flashcards & Bookmarks ?
Please log in or register to use Flashcards and Bookmarks. You can also log in with
Flashcards ?
My bookmarks ?
+ Add current page to bookmarks
Mentioned in ?
References in periodicals archive ?
Parameters with a difference value between 0.5 and 1.0 included U1NA distance, L1NB distance, and nasolabial angle. The only parameter with a difference value between 1.0 and 1.5 was the L1NB distance.
Comparative Evaluation of Conventional and OnyxCeph[TM] Dental Software Measurements on Cephalometric Radiography
In addition, nasofrontal and nasolabial angles were measured pre..and post.operatively.
Congenital Deficiency of the Medial Crus
Then the value of the nasolabial angle was determined, formed by the join of the columella, subnasale and edge of the upper lip.
Three-dimensional Analysis of Nasolabial Soft Tissues While Smiling Using stereophotogrammetry (3dMDTM)/ Analisis Tridimensional de los Tejidos Blandos Nasolabiales en Sonrisa Utilizando Estereofotogrametria (3dMDTM)
Maxillary incisor inclination and upper lip thickness show weak and statistically insignificant correlation with nasolabial angle.
CORRELATION OF NASOLABIAL ANGLE WITH MAXILLARY INCISOR INCLINATION AND UPPER LIP THICKNESS
In predicting the change in the nasolabial angle it is helpful to consider it as being composed of two components; hence, the overall alteration will depend on the changes in the columella angle (i.e.
REVIEW OF NASAL CHANGES WITH MAXILLARY ORTHOGNATHIC SURGERY/Ust Cenede Yapilan Ortognatik Cerrahi Girisimler Sonrasinda Burunda Meydana Gelen. Degisikliklerin Degerlendirilmesi
The data of facial analysis did not show a correlation with those analyzing facial aesthetics, except for grooves in the forehead region that presented a relation with the nasolabial angle (p = 0.03).
Aesthetic face evaluation in individuals with Dentofacial Deformities/Avaliacao estetica da face em individuos com deformidades dentofaciais
These findings show no significant differences between upper lip to E-line in all the groups as well as upper lip to TV-line, lower lip to TV-line, the mentolabial groove, the nasolabial angle. Comparing together brachycephalic-mesocephalic and mesocephalic-dolichocephalic groups no significant difference was present from the upper lip to S.
Analisis de la proyeccion labial en pacientes braquiocefalicos, mesocefalicos y dolicocefalicos de una poblacion mexicana
Facial analysis observed the convex profile, straight nasolabial angle, short mentocervical line and occlusion analysis the molar and canines in Class II, equal to or higher than the half of a cusp, and overjet equal to or greater than 5mm.
Skeletal and dental changes induced by bionator in early treatment of class II/Alteracoes esqueleticas e dentarias induzidas pelo bionator no tratamento precoce da classe II
On extra oral clinical examination patient had a mesocephalic shape of the head with mesoprosopic facial form, profile of the patient was convex with acute nasolabial angle. Intra oral examination revealed Angle's class I molar relation and a class I canine relation on both the sides with severely proclined upper and lower anteriors.
Corticotomy assisted enmasse retraction
Past history of this patient revealed swelling at nasolabial angle 1 yr back, which was excised and reconstruction using forehead flap was done and was reported as having pilomatricoma.
Pilomatricoma-analysis of 15 cases with review of literature
This, they concluded that the VNO was `1.8 cm posterior to the nasolabial angle and 0.77 cm from the nasal floor'.
THE PHYSICAL CHARACTERISTICS OF THE VOMERONASAL ORGAN IN THE PAKISTANI POPULATION