[pi″o-der´mah]
any purulent skin disease.
pyoderma gangreno´sum a rapidly evolving cutaneous ulcer or ulcers, with undermining of the border. Once regarded as a complication peculiar to ulcerative colitis, it is now known to occur in other wasting diseases.

(pī'ō-der'mă),
Any pyogenic infection of the skin; may be primary, as impetigo, or secondary to a previously existing condition.
[pyo- + G. derma, skin]

(pī'ō-dĕr'mă)
Any pyogenic infection of the skin; may be primary, as impetigo, or secondary to a previously existing condition.
[pyo- + G. derma, skin] 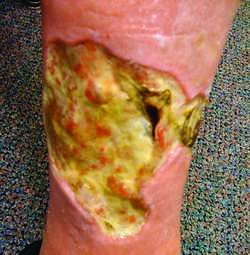 PYODERMA GANGRENOSUM OF THE LOWER LEG

A rare, ulcerating skin disease in which the skin is infiltrated by neutrophils. It is often found in people with other underlying illnesses, such as inflammatory bowel disease, rheumatoid arthritis, or some hematological malignancies.
See: illustration

A pus-containing skin infection, such as impetigo, caused by Staphylococcus or group A Streptococcus bacteria.
Mentioned in: Skin Culture