[kah-ri´nah] (pl. cari´nae) (L.)
a ridgelike structure.
carina tra´cheae a downward and backward projection of the lowest tracheal cartilage, forming a ridge between the openings of the right and left principal bronchi.
carina urethra´lis vagi´nae the column of rugae in the lower anterior wall of the vagina, immediately below the urethra.

(kă-rī'nă, -rī'nē),
1. In humans, a term applied or applicable to several anatomic structures forming a projecting central ridge.
2. That portion of the sternum in a bird, bat, or mole that serves as the origin of the pectoral muscles; it is not found in flightless birds or in most mammals.
[L. the keel of a boat]

(kə-rī′nə, -rē′-)
n. pl. cari·nae (-nē)
A keel-shaped ridge or structure, such as that on the breastbone of a bird or of the fused lower two petals of flowers of many members of the pea family.

(ka-ri'na) plural.carinae [L., keel of a boat]
A structure with a projecting central ridge. 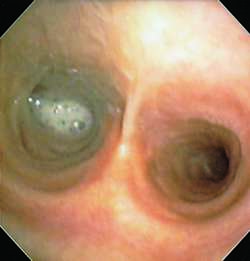 CARINA OF THE TRACHEA: seen bronchoscopically

carina of the trachea

The ridge at the lower end of the trachea separating the openings of the two primary bronchi.
See: illustration

The carina of the trachea.

carina of the urethra

The ridge extending posteriorly from the urethral orifice and continuous with the anterior column of the vagina.

The carina of the urethra.

Any keel-shaped ridge in the body, especially the ridge formed where the TRACHEA divides into the two bronchi.