[mi″o-kahr´de-al]
pertaining to the muscular tissue of the heart (the myocardium).
myocardial infarction (MI) death of the cells of an area of the heart muscle (myocardium) as a result of oxygen deprivation, which in turn is caused by obstruction of the blood supply; commonly referred to as a “heart attack.”

The myocardium receives its blood supply from the two large coronary arteries and their branches. Occlusion of one or more of these blood vessels (coronary occlusion) is one of the major causes of myocardial infarction. The occlusion may result from the formation of a clot that develops suddenly when an atheromatous plaque ruptures through the sublayers of a blood vessel, or when the narrow, roughened inner lining of a sclerosed artery leads to complete thrombosis. Coronary artery disease is the most common type of heart disease in the United States and many other countries. The risk rises rapidly with age, women tending to develop the disease 15 to 20 years later than men.

Other causes of MI may be attributed to a sudden increased unmet need for blood supply to the heart, as in shock, hemorrhage, and severe physical exertion, and to restriction of blood flow through the aorta, as in aortic stenosis.
Pathology. The most common sites of myocardial infarction are in the left ventricle, that chamber of the heart which has the greatest workload. Tissue changes that occur in the myocardium are related to the extent to which the cells have been deprived of oxygen. Total deprivation results in an area of infarction, in which the cells die and the tissue becomes necrotic. Necrosis in this area is evident within 5 to 6 hours after the occlusion. In response to this necrosis the body increases its production of leukocytes, which aid in removal of the dead cells. As collateral circulation enlarges, it brings fibroblasts, which form a connective tissue scar within the area of infarction. Usually, the formation of fibrous scar tissue is complete within 2 to 3 months.

The outermost area of damage is the zone of ischemia, which borders the area of injury. The cells in this area are weakened by decreased oxygen supply, but function can return usually within two to three weeks after the onset of occlusion.

All of the pathological changes described above can be identified by electrocardiography. The information thus obtained is used to prescribe the varying degrees of physical activity allowed the patient during convalescence.
Risk Factors. Unavoidable traits that increase a person's chances for coronary artery disease include genetic susceptibility, sex, increasing age, and diabetes mellitus. Factors that can be controlled to some extent in order to ameliorate the risk include hypertension, cigarette smoking, and elevated serum lipids. Almost half of the persons who have suffered heart attacks have a history of one or more of these latter three risk factors. Minimizing or eliminating these avoidable factors can reduce the incidence and severity of ischemic heart disease. Preventive measures are discussed more fully under heart.
Symptoms. The most outstanding symptom of acute myocardial infarction is a sudden painful sensation of pressure, often described as a “crushing pain” in the chest, occasionally radiating to the arms, throat, and back, and persisting for hours. Pallor, profuse perspiration, and other signs of shock are present. There may be nausea and vomiting, leading to the mistaken impression that the victim is suffering from acute indigestion. In almost all cases of severe MI the patient is extremely apprehensive and has a sense of impending death.

Severity of symptoms may depend on the size of the artery at the point of occlusion and the amount of myocardial tissue served by the artery. In some instances the artery may be small and the symptoms mild. In other cases the extent of damage is quite large and the attack is fatal.

Within 24 hours of the initial attack there is an elevated temperature and increased white cell count in response to the inflammatory process arising from necrosis of myocardial tissue. Death of the cells also brings about the release of certain enzymes that enter the general circulation. The levels of these enzymes in the blood can be determined by clinical laboratory tests. Within 2 to 4 hours after infarction the level of creatine kinase (CK) is increased; it reaches its peak within 24 hours and subsides to normal level within 48 hours. The level of serum aspartate transaminase (AST) increases rapidly in 4 to 6 hours, reaches its peak in 24 to 48 hours, and returns to normal in five days. In contrast to the rapid rise and decline of these two enzyme levels, lactate dehydrogenase (LD) levels begin to increase the first day after attack and persist at high levels for 10 to 20 days. troponin is another enzyme that is a sensitive marker of myocardial infarction. Tests can be made more specific by measuring the LD1 and CK2 isoenzymes, which are found in the heart. Diagnosis of MI is based on the presenting symptoms and evidence of impaired heart function found by physical examination and electrocardiography and on abnormal serum enzyme levels.
Treatment and Patient Care. Immediate care of acute myocardial infarction is concerned with combatting shock, relieving respiratory difficulty, and preventing further circulatory collapse. The victim should be kept lying down, and all tight clothing should be loosened to relieve dyspnea and promote comfort. Supplemental oxygen should be supplied, and oxygen consumption should be reduced by relieving anxiety and pain and supporting respiration. Without delay, but in a calm manner, the patient is transported to a medical care facility. If the victim shows signs of cardiac arrest, efforts at cardiopulmonary resuscitation are begun immediately.

Medical treatment includes administration of thrombolytic therapy and an analgesic such as morphine sulfate or meperidine (Demerol). On occasion the physician may order atropine sulfate with morphine to counteract serious bradycardia. In almost all cases oxygen is administered for at least the first 24 hours.

Intravenous thrombolytic therapy using tissue plasminogen activator or streptokinase should be considered for all patients presenting within 12 hours of onset of pain. Maximum potential benefit occurs when these drugs are administered within 4 to 6 hours. Nursing considerations include the early accurate assessment of potential candidates for thrombolytic therapy, prompt administration of medication, and careful monitoring of complications such as arrhythmias, hypotension, allergic reactions, reocclusion, and hemorrhage. Early catheterization and angioplasty with a stent may also be done and may be superior to intravenous thrombolytic therapy.

Rest is essential for repair of damaged myocardial cells, but that does not necessarily mean absolute bed rest. Whether the patient is placed on bed rest or allowed up in a chair depends on symptoms and nursing judgments. During the acute stage some physicians may prefer that the patient rest in a chair at the bedside. The patient is permitted to get out of bed with assistance and sit in the chair until he begins to feel fatigued. The amount of time the patient is allowed to sit up and become more physically active is gradually increased.

Adequate rest can be achieved more easily if mental anxiety is reduced; a restful environment is thought to enhance the ability to rest. The amount of rest needed and the degree of physical activity allowed depends on how extensive the area of infarction is thought to be, whether cardiac arrhythmias and other complications develop, and the response of the patient to increased physical activity. Careful monitoring of the pulse rate and blood pressure before and after each activity can provide information with which to evaluate the patient's tolerance for exercise and self-care activities.

Most patients with a myocardial infarction are cared for in a coronary care unit during the acute stage. It is important that the patient and family be given a brief explanation of the various kinds of monitoring equipment in use and that they be reassured of each staff member's concern for the patient's welfare.

As the patient's status improves he or she is gradually weaned away from intensive care and encouraged to participate more in self-care. For some, this is a traumatic experience and they become very apprehensive about leaving the security of the monitors and the attention of the staff. Cardiac rehabilitation is also an important aspect of care. In some hospitals the transition from coronary care unit to home is made easier by transfer to a “step-down” or intermediate care unit where the patient's response to activities is monitored and instructions are given regarding care for himself or herself after discharge. Information about local coronary clubs, assistance in patient education, and availability of a Cardiac Work Evaluation Unit to determine the patient's readiness to return to work can be obtained by contacting the local unit of the American Heart Association. 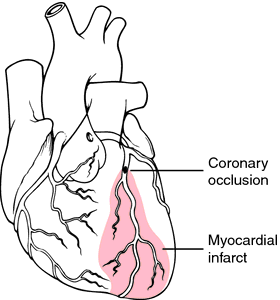 , myocardiac (mī-ō-kahr'dē-ăl, -ē-ak)
Relating to the myocardium.
Medical Dictionary for the Health Professions and Nursing © Farlex 2012

More discussions about myocardial
This content is provided by iMedix and is subject to iMedix Terms. The Questions and Answers are not endorsed or recommended and are made available by patients, not doctors.