[shēth]
a tubular case or envelope.
arachnoid sheath the delicate membrane between the pial sheath and the dural sheath of the optic nerve.
carotid sheath a portion of the cervical fascia enclosing the carotid artery, internal jugular vein, vagus nerve, and sympathetic nerves supplying the head.
connective tissue sheath of Key and Retzius endoneurium.
crural sheath femoral sheath.
dural sheath the external investment of the optic nerve.
femoral sheath the fascial sheath of the femoral vessels.
Henle's sheath endoneurium.
lamellar sheath the perineurium.
medullary sheath myelin sheath.
myelin sheath (nerve sheath) the sheath surrounding the axon of myelinated nerve cells, consisting of concentric layers of myelin formed in the peripheral nervous system by the plasma membrane of Schwann cells, and in the central nervous system by the plasma membrane of oligodendrocytes. It is interrupted at intervals along the length of the axon by gaps known as nodes of Ranvier. Myelin is an electrical insulator that serves to speed the conduction of nerve impulses (see saltatory conduction).
pial sheath the innermost of the three sheaths of the optic nerve.
root sheath the epidermic layer of a hair follicle.
sheath of Schwann neurilemma.
synovial sheath synovial membrane lining the cavity of a bone through which a tendon moves.
tendon sheath a lubricated fibrous or synovial layer of tissue in which the tendon is housed and through which it moves.
Miller-Keane Encyclopedia and Dictionary of Medicine, Nursing, and Allied Health, Seventh Edition. © 2003 by Saunders, an imprint of Elsevier, Inc. All rights reserved.

the lipoproteinaceous envelope in vertebrates surrounding most axons larger than 0.5-mcm diameter; it consists of a double plasma membrane wound tightly around the axon in a variable number of turns and supplied by oligodendroglia cells (in the brain and spinal cord) or Schwann cells (in peripheral nerves); unwound, the double membrane would appear as a sheetlike cell expansion devoid of cytoplasm but for a few narrow cytoplasmic strands corresponding to apparent interruptions of the regular myelin structure, the incisures of Schmidt-Lanterman. The myelin sheath of each axon is composed of a fairly regular longitudinal sequence of segments, each corresponding to the length of sheath supplied by a single oligodendroglia or Schwann cell; in the short interval between each two neighboring segments, the nodes of Ranvier, the axon is unmyelinated even though it is enclosed by complex, fingerlike, membranous expansions of the neighboring oligodendroglia or Schwann cells.
Synonym(s): medullary sheath
Farlex Partner Medical Dictionary © Farlex 2012

n.
The insulating envelope of myelin that surrounds the core of a nerve fiber or axon and facilitates the transmission of nerve impulses. In the peripheral nervous system, the sheath is formed from the membranes of Schwann cells, and in the central nervous system it is formed from oligodendrocytes. Also called medullary sheath.
The American Heritage® Medical Dictionary Copyright © 2007, 2004 by Houghton Mifflin Company. Published by Houghton Mifflin Company. All rights reserved.

(mī'ĕ-lin shēth)
The lipoproteinaceous envelope in vertebrates surrounding most axons of more than 0.5 mcm diameter; it consists of a double plasma membrane wound tightly around the axon in a variable number of turns, and supplied by oligodendroglia cells (in the brain and spinal cord) or Schwann cells (in peripheral nerves).
Medical Dictionary for the Health Professions and Nursing © Farlex 2012 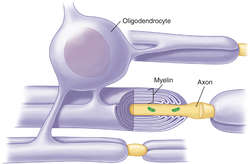 a sheath of fatty substance associated with protein which surrounds larger nerve fibres of vertebrates. see DENDRITE. The white lipid coating is produced by SCHWANN CELLS. The sheath permits a greater current flow and thus speeds the transmission of nervous impulses. Constrictions in the myelin sheath, known as nodes ofRanvier, indicate the division between one Schwann cell and another. Nonmyelinated fibres occur commonly in invertebrates, internally in the spinal cord of vertebrates, and in the AUTOMATIC NERVOUS SYSTEM of vertebrates. Myelinated fibres, white in appearance, occur outside the spinal cord of vertebrates.
Collins Dictionary of Biology, 3rd ed. © W. G. Hale, V. A. Saunders, J. P. Margham 2005

The cover that surrounds many nerve cells and helps to increase the speed by which information travels along the nerve.
Mentioned in: Acoustic Neuroma
Gale Encyclopedia of Medicine. Copyright 2008 The Gale Group, Inc. All rights reserved.

Feedback
Flashcards & Bookmarks ?
Please log in or register to use Flashcards and Bookmarks. You can also log in with
Flashcards ?
My bookmarks ?
+ Add current page to bookmarks
Mentioned in ?
References in periodicals archive ?
Researchers at the University of Maryland School of Medicine (UMSOM) have discovered that a type of skinrelated stem cell could be used to help regenerate myelin sheaths, a vital part of the nervous system linked to neurodegenerative disorders.
Pigment-Producing Stem Cells Can Regenerate Vital Part Of Nervous System
Thicker myelin sheath in the systemic melatonin group than in the topical melatonin and topical dexamethasone groups may be interpreted as follows: systemic melatonin had more important effects in preserving the thickness of myelin.
Effects of Melatonin and Dexamethasone on Facial Nerve Neurorrhaphy
Attwell, "Regulation of developing myelin sheath elongation by oligodendrocyte calcium transients in vivo," Nature Neuroscience, vol.
Regulation of Central Nervous System Myelination in Higher Brain Functions
Compression of myelin sheaths thickness in 4000 [micro][m.sup.2] area of sciatic nerve of the control and OGD (Offspring of Gestational Diabetes).
The Effect of Gestational Diabetes Mellitus on Sciatic Nerve in Adult Offspring Rats/Efecto de la Diabetes Mellitus Gestacional Sobre el Nervio Ciatico en Ratas Adultas
However, in the control group, the axons were very small and there was no myelin sheath in nearly all of the axons in the nerve (refer to Figures 1(b), 1(c), and 1(d)).
The Changes in Rats with Sciatic Nerve Crush Injury Supplemented with Evening Primrose Oil: Behavioural, Morphologic, and Morphometric Analysis
In contrast, in the eGFP-[SCs.sup.N] group, unlike with eGFP-[SCs.sup.I], almost all eGFP-positive ones were in tight contact with the POimmunoreactive substance with 1: 1 relationship and mostly skewed to one side, similarly to normal SC cell body in the myelin sheath. At longitudinal sections, in eGFP-[SCs.sup.I] transplantation, all the PO-immunoreactive tube-like structures were wrapped by eGFP-positive ones.
Comparative Analysis of the Cell Fates of Induced Schwann Cells from Subcutaneous Fat Tissue and Naive Schwann Cells in the Sciatic Nerve Injury Model
As regards the thickness of the myelin sheath, the result was similar to nerve fiber diameter (F (3; 21) = 5.49, p = 0.0062); that is, CG and EG had significant differences compared to LG and LEG.
Nociceptive and neuronal evaluation of the sciatic nerve of wistar rats subjected to compression injury and treated with resistive exercise
For each block the fiber diameter axonal diameter and myelin sheath thickness were determined by at least 50 nerve fibers.
Effects of D-Galactose on the Structure of Nerve Fibers in Cerebellar White Matter
Which city is home to the football team myelin sheath? Anderlecht?
Quiz of the Day
These areas reveal inflammation of the nerve fibers' myelin sheath, which provides insulation and facilitates the transmission of electric signals.
Higher vitamin D levels associated with fewer MS symptoms
The last part of the book presents applications in areas such as imaging myelin sheath by CARS microscopy, imaging lipid metabolism, CARS microscopy studies of liquid crystals, and coherent Raman scattering imaging of drug delivery systems.
Coherent Raman scattering microscopy
Research Fellow Dr Samuel Wharton said: "While most MRI-based research focuses on tissue measurements at the millimeter length scale, our experimental scans on healthy human volunteers and modeling of the myelin sheath shows that much more detailed microscopic information relating to the size and direction of nerve fibers can be generated using fairly simple imaging techniques.
MRI Research Sheds New Light on Nerve Fibers in Brain