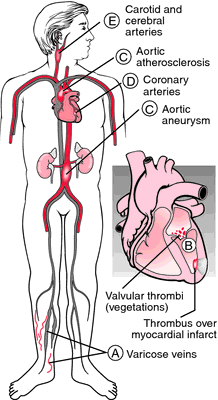 Sites of thrombus formation. From Damjanov, 1996.
mural thrombus one attached to the wall of the heart adjacent to an area of diseased endocardium, or to the aortic wall overlying an intimal lesion. See also parietal thrombus.
occluding thrombus one that occupies the entire lumen of a vessel and obstructs blood flow.
parietal thrombus one attached to a vessel or heart wall; see also mural thrombus.
Miller-Keane Encyclopedia and Dictionary of Medicine, Nursing, and Allied Health, Seventh Edition. © 2003 by Saunders, an imprint of Elsevier, Inc. All rights reserved.

a thrombus formed on and attached to a diseased patch of endocardium, not on a valve or on one side of a large blood vessel.
See also: parietal thrombus.
Farlex Partner Medical Dictionary © Farlex 2012

(myū'răl throm'bŭs)
A thrombus formed on and attached to a diseased patch of endocardium, not on a valve or on one side of a large blood vessel.
See also: parietal thrombus
Medical Dictionary for the Health Professions and Nursing © Farlex 2012

A blood clot formed within the blood and attached to the wall of a blood vessel or to the lining of a chamber of the heart. Mural thrombi are liable to break loose and form dangerous EMBOLI.
Collins Dictionary of Medicine © Robert M. Youngson 2004, 2005

Feedback
Flashcards & Bookmarks ?
Please log in or register to use Flashcards and Bookmarks. You can also log in with
Flashcards ?
My bookmarks ?
+ Add current page to bookmarks
Mentioned in ?
References in periodicals archive ?
In this case report, sedation for central vein catheterization a girl patient who having severe congestive heart failure with huge mural thrombus in left ventriculus has been presented.
Anaesthesia in Naxos disease: first case report
Left ventricular mural thrombus is a well-recognized complication of acute myocardial infarction.
In fact, left ventricular embolism after myocardial infarction resulting in stroke, bowel, and limb ischemia has been reported in literature8 In survivors of myocardial infarction with an LV mural thrombus, systemic embolization occurs in about 10%9.
FREQUENCY OF EARLY LEFT VENTRICULAR THROMBUS IN PATIENTS PRESENTING WITH VARIOUS TYPES OF ACUTE ST ELEVATION MYOCARDIAL INFARCTION USING ECHOCARDIOGRAPHY AS A MEASURING TOOL
Left atrial thrombus, and LV mural thrombus were observed in 5 (5%) and 14 (14%) patients, respectively.
Clinical Characteristics and Prognosis of End-stage Hypertrophic Cardiomyopathy
This device is contraindicated in patients with active systemic infection, those with an intracardiac mural thrombus, or those who have had a ventriculotomy or atriotomy in the preceding 4 weeks, and in patients with cryoglobulinemia.
CryoCor Cardiac Cryoablation System
Thrombotic causes for catheter obstruction include intraluminal thrombus, extraluminal fibrin sleeve, mural thrombus, or major vessel occlusion and present as either complete or partial occlusion (Hadaway, 1998).
Central Venous Catheter Occlusion: Successful Management Strategies
Tissue characterisation was consistent with apical wall oedema, which had reduced significantly in size since the previous CMR, and complete resolution of the left ventricular apical mural thrombus and pleural effusions (Figure 3).
Staphylococcus aureus Myocarditis with Associated Left Ventricular Apical Thrombus
Severe mitral regurgitation may prevent mural thrombus formation within the left ventricle with systolic dysfunction.
Clinical Characteristics and Risk Factors of Left Ventricular Thrombus after Acute Myocardial Infarction: A Matched Case-control Study
An abdominal ultrasound can delineate the transverse and longitudinal dimensions of an abdominal aortic aneurysm and may detect mural thrombus. CT with contrast and MRI are accurate, noninvasive tests to determine the location and size of abdominal aortic aneurysms and to plan endovascular or open surgical repair.
Rare case of large abdominal aortic aneurism with a big thrombus
Balloon angioplasty was also performed to treat the residual mural thrombus and persistent stenosis in the axillary and subclavian veins.
Paget-Schroetter syndrome
Other recent technical modalities can also be used for optimal imaging in the workup such as echocardiography, MRI, and spiral CT which can demonstrate the patent lumen and detect any mural thrombus or other abnormalities of the vessel wall [1, 7].
Aneurysm of the Pulmonary Artery in Fallot's Tetralogy
Although the exact pathogenesis of cardiac CAT is not determined, some authors believe the hypothesis that cardiac CAT is an organized and calcified mural thrombus [8].
Cardiac Calcified Amorphous Tumor of the Mitral Valve Presenting as Transient Ischemic Attack