[mul´tĭ-p'l]
manifold; occurring in various parts of the body at once.
multiple myeloma a malignant neoplasm of plasma cells in which the plasma cells proliferate and invade the bone marrow, causing destruction of the bone and resulting in pathologic fracture and bone pain. It is the most common type of monoclonal gammopathy, characterized by presence of a monoclonal immunoglobulin (immunoglobulin recognized as a single protein), Bence Jones proteins in the urine, anemia, and lowered resistance to infection. Called also plasma cell myeloma.

Diagnostic procedures to confirm suspected multiple myeloma include blood analyses, quantitative immunologic assays of serum and urine, urinalysis, bone marrow aspiration and biopsy, and skeletal x-rays. Findings indicative of the disease are an increased number of plasma cells in the bone marrow (usually over 10 per cent of the total), anemia, hypercalcemia due to release of calcium from deteriorating bone tissue, and elevated blood urea nitrogen, Bence Jones protein in the urine, and osteolytic lesions that give the bone a honeycomb appearance on x-ray and lead to vertebral collapse.
Treatment. Treatment of multiple myeloma involves chemotherapy and radiation to relieve pain and manage the acute lesions of the spinal column. High-dose chemotherapy followed by blood cell rescue has shown some efficacy in certain situations. Individuals diagnosed with multiple myeloma who show no symptoms do not usually receive treatment.
Patient Care. Major problems presented by the patient with multiple myeloma are related to anemia, hypercalcemia, bone pain and pathologic fractures, and emotional distress created by trying to cope with the day-to-day physiologic and emotional aspects associated with the diagnosis of a malignant disease. The more common complications to be avoided are infection, renal failure, and the sequelae of spinal cord compression.

Transfusions with packed red blood cells can help alleviate and minimize some of the more severe symptoms of anemia. It is important that the patient be adequately hydrated to improve viscosity of the blood and circulation, to help avoid hypercalcemia, and to maintain kidney function for excretion of the products of protein metabolism. Continued ambulation and moderate exercise help slow down the loss of minerals, especially calcium, from the bones. Other problems are related to the administration of highly toxic antineoplastic drugs. 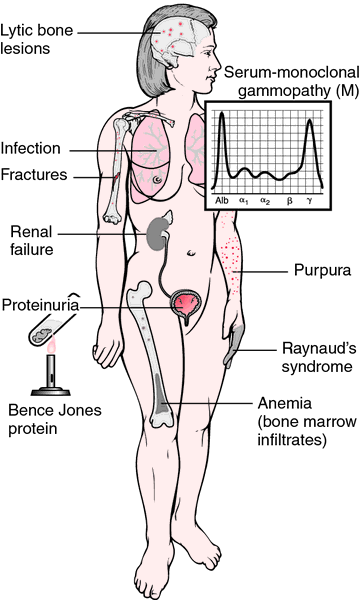 Multiple myeloma. Radiographs of the skull, ribs, and vertebrae show multiple punched out lesions. There is anemia secondary to bone marrow lesions that replace red blood cell precursors. Kidney failure is the most common cause of death. The urine contains Bence Jones protein. From Damjanov, 2000.
multiple organ dysfunction syndrome (multiple organ failure) failure of two or more organ systems in a critically ill patient because of a complex and interrelated series of events.

The pathogenesis of multiple organ failure. From Datex Medical Instrumentation, Inc., Tewksbury, MA.
multiple personality disorder dissociative identity disorder.
multiple-puncture test an intracutaneous test in which the material used (such as tuberculin) is introduced into the skin by pressure of several needles or pointed tines or prongs. This procedure is used in mass screenings, but it is not as accurate as other tests because of lack of precise measurement of the amount of medication actually entering the skin.
multiple sclerosis (MS) a chronic neurologic disease in which there are patches of demyelination scattered throughout the white matter of the central nervous system, sometimes extending into the gray matter. The disease primarily affects the myelin and not the nerve cells themselves; any damage to the neurons is secondary to destruction of the myelin covering the axon. The symptoms caused by these lesions are typically weakness, incoordination, paresthesias, speech disturbances, and visual disturbances, particularly diplopia. More specific signs and symptoms depend on the location of the lesions and the severity and destructiveness of the inflammatory and sclerotic processes.

The course of the disease is usually prolonged, with remissions and relapses over many years. Brief exacerbations, even with acute and severe symptoms, are thought to be the result of a transient inflammatory depression of neural transmission. Recovery occurs when there has been no permanent damage to the myelin sheath during the attack. Repeated attacks can, however, eventually permanently denude the axons and leave the yellow sclerotic plaques that are characteristic of the disease. Once the disease process reaches the stage of sclerosis the affected axons cannot recover and there is permanent damage.

The prevalence of MS is not certain because the disease is not one that is reported, and mild cases can be either misdiagnosed or never brought to the attention of a health care provider. It is far more common in the temperate zones of the world than in tropical and subtropical climates. The onset of symptoms most often occurs between the ages of 20 and 40 years, and the disease affects both sexes about equally.

The cause of multiple sclerosis is unknown. It is likely that an inherited immune response is somehow responsible for the production of autoantibodies that attack the myelin sheath. Some authorities believe that infection by one of the slow viruses occurs during childhood and after some years of latency the virus triggers an autoimmune response. Others believe there is an antigen or environmental trigger for the disease.

The diagnosis of multiple sclerosis is difficult because of the wide variety of possible clinical manifestations and the resemblance they bear to other neurological disorders. There is no definitive diagnostic test for the condition, but persons with objectively measured abnormalities of the central nervous system, a history of exacerbation and remission of symptoms, and demonstrable delayed blink reflex and evoked visual response are diagnosed as having either possible or probable multiple sclerosis. With time and progressive worsening of symptoms the diagnosis can become definite.
Treatment. A multidisciplinary approach is required to diagnose the condition and help patients and their families cope with the attendant problems. Multiple sclerosis has an impact on physical activity and life style, role, and interpersonal relationships; therefore, vocational guidance, counseling, and group therapy are helpful. It is important that the patient with severe disability maintain a positive attitude, focusing on functional abilities rather than disabilities. Regeneration of the damaged neural tissue is not possible but retraining and adaptation are. Stress due to trauma, infection, overexertion, surgery, or emotional upset can aggravate the condition and precipitate a flare-up of symptoms.

Supportive measures include a regimen of rest and exercise, a well-balanced diet, avoidance of extremes of heat and cold, avoidance of known sources of infection, and adaptation of a life style that is relatively unstressful while still being as productive as possible.

Therapeutic measures include medications to diminish muscle spasticity; measures to overcome urinary retention (such as credé's method or intermittent catheterization); speech therapy; and physical therapy to maintain muscle tone and avoid orthopedic deformities. Management of MS has been greatly enhanced by the availability of interferons beta-1a and beta-1b. Research support is strong that these medications reduce the frequency and severity of relapses.

Many multiple sclerosis patients and their families receive valuable support and encouragement from communication with others coping with the condition. A local chapter of the National Multiple Sclerosis Society is within reach of most persons in the United States. Information and assistance in all phases of the disease are available by writing to The National Multiple Sclerosis Society, 733 Third Ave., 6th floor, New York, NY 10017, or consulting their web site at http://www.nmss.org.
Miller-Keane Encyclopedia and Dictionary of Medicine, Nursing, and Allied Health, Seventh Edition. © 2003 by Saunders, an imprint of Elsevier, Inc. All rights reserved.

adjective Of or characterised by more than two.
Segen's Medical Dictionary. © 2012 Farlex, Inc. All rights reserved.

(mŭl'ti-pĕl) Avoid the jargonistic use in the sense of more than one ("multiple vitamins"), various ("metastases at multiple sites"), or numerous ("omitted multiple doses because of side-effects").
Manifold; repeated several times.
[L. multiplex, fr. multus, many, + plico, pp. -atus, to fold]
Medical Dictionary for the Health Professions and Nursing © Farlex 2012

Q. Multiple Myeloma what and how is it treated and what is MGUF

A. Were you referring by any chance to MGUS (monoclonal gammopathy of unknown significance)? It's a condition that resembles myeloma but is much more widespread and by itself isn't considered malignant. It may, however, deteriorate to multiple myeloma over the years.

Myeloma is treated with chemotherapy of various kinds, and sometimes with bone marrow transplantation with the patients own bone marrow.

You may read more here:
www.nlm.nih.gov/medlineplus/multiplemyeloma.html

Q. Multiple diseases how do i handle them?

Q. does multiple sclerosis cause mood swings seem like i have changed. I 've become very irritable towards my family. Seems like I've become a mean person, and that has not my charactor.

A. MS can indeed cause depression or other mood changes such as euphoria, so it may be part of the disease. In addition, some treatments may also cause mood changes. If it bothers you, than consulting your doctor may be wise.

Take care…
More discussions about multiple
This content is provided by iMedix and is subject to iMedix Terms. The Questions and Answers are not endorsed or recommended and are made available by patients, not doctors.