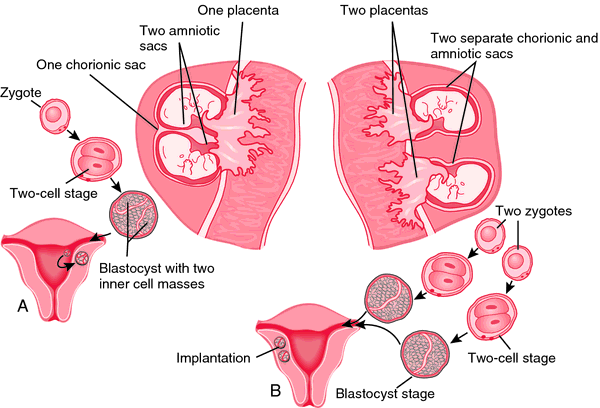 A, Monozygotic twinning. The single inner cell mass divides into two inner cell masses during the blastocyst stage. These twins have a single placenta and chorion, but each twin develops in its own amnion. B, Dizygotic twinning. Two ova are released during ovulation, and each is fertilized by a separate spermatozoon. The ova may implant near each other in the uterus, or they may be far apart. From McKinney et al., 2000.
Miller-Keane Encyclopedia and Dictionary of Medicine, Nursing, and Allied Health, Seventh Edition. © 2003 by Saunders, an imprint of Elsevier, Inc. All rights reserved.

Feedback
Flashcards & Bookmarks ?
Please log in or register to use Flashcards and Bookmarks. You can also log in with
Flashcards ?
My bookmarks ?
+ Add current page to bookmarks
Mentioned in ?
References in periodicals archive ?
There were 127,762 and 127,186 SNVs present in each twin, respectively, and 124,185 (97.4%) of the SNVs were shared between the twins, supporting their monozygosity. Twin 1 and twin 2 shared 79.7% of the total SNPs with their father and 80.0% with their mother, providing proof of the biological relationship of the family.
Failure to Identify Somatic Mutations in Monozygotic Twins Discordant for Schizophrenia by Whole Exome Sequencing
Research shows that the closest correlation to DNA test results on monozygosity is the twins' own opinion, which was reported to be 95% correct.
Ethical issues and Huntington's disease
When the data suggest monozygosity, the noninvasive aneuploidy test could be applied, as long as the total fractional fetal DNA concentration exceeds the minimum stipulated by the test protocol, e.g., 4% (21).
Noninvasive prenatal determination of twin zygosity by maternal plasma DNA analysis
Increasing birth length (P = 0.038), nonsmoking of the mother during pregnancy (P = 0.002), and monozygosity (0.012) were also significant predictors for atopic dermatitis in the whole sample when ignoring the familial relationship between the twins (Table 1).
Apgar score is related to development of atopic dermatitis: cotwin control study
Al Mufti, "The Phenomenon of Monozygosity: Spontaneous Zygotic Splitting," in Multiple Pregnancy: Epidemiology, Gestation, and Perinatal Outcome, 2nd ed., ed.
Relating body and soul: insights from development and neurobiology
The phenomenon of monozygosity in iatrogenic pregnancies.
Loss and grief in twin pregnancy and birth