[sis´tem]
1. a set or series of interconnected or interdependent parts or entities (objects, organs, or organisms) that act together in a common purpose or produce results impossible by action of one alone.
2. an organized set of principles or ideas. adj., adj systemat´ic, system´ic.

An open system is one in which there is an exchange of matter, energy, and information with the environment; in a closed system there is no such exchange. A living system cannot survive without this exchange, but in order to survive it must maintain pattern and organization in the midst of constant change. Control of self-regulation of an open system is achieved by dynamic interactions among its elements or components. The result of self-regulation is referred to as the steady state; that is, a state of equilibrium. homeostasis is an assemblage of organic regulations that act to maintain steady states of a living organism.

A system can be divided hierarchically into subsystems, which can be further subdivided into sub-subsystems and components. A system and its environment could be considered as a unified whole for purposes of study, or a subsystem could be studied as a system. For example, the collection of glands in the endocrine system can be thought of as a system, each endocrine gland could be viewed as a system, or even specific cells of a single gland could be studied as a system. It is also possible to think of the human body as a living system and the endocrine system as a subsystem. The division of a system into a subsystem and its environment is dependent on the perspective chosen by the person studying a particular phenomenon. 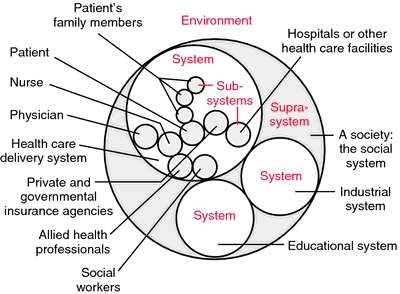 Systems, subsystems, and suprasystems. Within the environment there are suprasystems, such as human society, and systems within the suprasystem, such as the educational and industrial systems and the health care delivery system. Within the health care delivery system are subsystems, such as the patient, family members, the nurse, the physician, and allied health care professionals and paraprofessionals.
alimentary system digestive system.
apothecaries' system see apothecaries' system.
autonomic nervous system see autonomic nervous system.
avoirdupois system see avoirdupois system.
behavioral system in the behavioral system model of nursing, the patterned, repetitive, and purposeful behaviors of an individual.
cardiovascular system the heart and blood vessels, by which blood is pumped and circulated through the body; see also circulatory system.
CD system (cluster designation) a system for classifying cell-surface markers expressed by lymphocytes based on a computer analysis of monoclonal antibodies against hla antigens, with antibodies having similar specificity characteristics being grouped together and assigned a number (CD1, CD2, CD3, etc.); these CD numbers are also applied to the specific antigens recognized by the various groups of monoclonal antibodies. See also CD antigen.
centimeter-gram-second system (CGS) (cgs) a system of measurements in which the units are based on the centimeter as the unit of length, the gram as the unit of mass, and the second as the unit of time.
central nervous system see central nervous system.
centrencephalic system the neurons in the central core of the brainstem from the thalamus to the medulla oblongata, connecting the cerebral hemispheres.
circulatory system see circulatory system.
client system in the general systems framework and theory of goal attainment, the composite of physiological, psychological, sociocultural, and developmental variables that make up the total person.
colloid system (colloidal system) colloid (def. 3).
conduction system (conductive system (of heart)) the system of atypical cardiac muscle fibers, comprising the sinoatrial and atrioventricular nodes, internodal tracts, atrioventricular bundle, bundle branch, and terminal ramifications into the Purkinje network.
digestive system see digestive system.
Emergency Medical Services (EMS) system a comprehensive program designed to provide services to the patient in the prehospital setting. The system is activated when a call is made to the EMS operator, who then dispatches an ambulance to the patient. The patient receives critical interventions and is stabilized at the scene. A communication system allows the health care workers at the scene to contact a trauma center for information regarding further treatment and disposition of the patient, followed by transportation of the patient to the most appropriate facility for treatment.
endocrine system the system of ductless glands and other structures that produce internal secretions (hormones) that are released directly into the circulatory system, influencing metabolism and other body processes; see endocrine glands.
environmental control system environmental control unit.
expert system a set of computer programs designed to serve as an aid in decision making.
extrapyramidal system see extrapyramidal system.
gateway system a software interface between an online searcher and one or more search systems, facilitating the use of the system by searchers who are unfamiliar with it, or with online retrieval in general.
genitourinary system the organs concerned with production and excretion of urine, together with the reproductive organs. (See Plates.) Called also urogenital system.
haversian system a haversian canal and its concentrically arranged lamellae, constituting the basic unit of structure in compact bone (osteon). 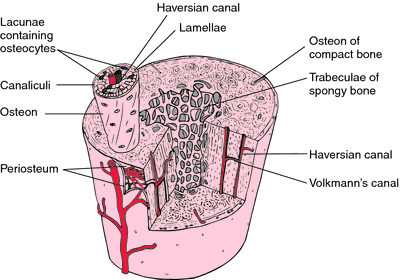 Haversian system: Structures of compact and spongy bone with the central haversian canal surrounded by the lamellae. From Applegate, 2000.
health care system see health care system.
heterogeneous system a system or structure made up of mechanically separable parts, as an emulsion or suspension.
His-Purkinje system the intraventricular conduction system from the bundle of His to the distal Purkinje fibers, which carries the impulse to the ventricles.
Home Health Care Classification system see home health care classification system.
homogeneous system a system or structure made up of parts that cannot be mechanically separated, as a solution.
hypophyseoportal system (hypophysioportal system) (hypothalamo-hypophysial portal system) the venules connecting the hypothalamus with the sinusoidal capillaries of the anterior lobe of the pituitary gland; they carry releasing substances to the pituitary.
immune system see immune system.
interpersonal system in the general systems framework and theory of goal attainment, two or more individuals interacting in a given situation.
lay health system a system comprising an informal referral network and sources of treatment outside the formal biomedical sources of health care; it includes individual consultation and information-seeking through significant others and peers concerning health behaviors, symptoms, and evaluation of treatment before, during, and after consultation with health care professionals.
legal system in the omaha system, anything connected with law or its administration; it includes legal aid, attorney, courts, or Child Protective Services (CPS), and many other agencies and officials.
limbic system a system of brain structures common to the brains of all mammals, comprising the phylogenetically old cortex (archipallium and paleopallium) and its primarily related nuclei. It is associated with olfaction, autonomic functions, and certain aspects of emotion and behavior.
lymphatic system see lymphatic system.
lymphoid system the lymphoid tissue of the body, collectively; it consists of primary (or central) lymphoid tissues, the bone marrow, and thymus, and secondary (or peripheral) tissues, the lymph nodes, spleen, and gut-associated lymphoid tissue (tonsils, Peyer's patches).
lymphoreticular system the lymphoid and reticuloendothelial systems considered together; see also lymphoreticular disorders.
metric system see metric system.
mononuclear phagocyte system the group of highly phagocytic cells that have a common origin from stem cells of the bone marrow and develop circulating monocytes and tissue macrophages, which develop from monocytes that have migrated to connective tissue of the liver (kupffer's cells), lung, spleen, and lymph nodes. The term has been proposed to replace reticuloendothelial system, which includes some cells of different origin and does not include all macrophages.
nervous system see nervous system.
nursing system in the self-care model of nursing, all the actions and interactions of nurses and patients in nursing practice situations; nursing systems fall into three categories: wholly compensatory, partly compensatory, and supportive-educative.
Omaha system see omaha system.
oxygen delivery system a device that delivers oxygen through the upper airways to the lungs at concentrations above that of ambient air. There are two general types: the fixed performance or high flow type, which can supply all of the needs of a patient for inspired gas at a given fractional inspired oxygen; and the variable performance or low flow type, which cannot supply all of the patient's needs for oxygen and delivers fractional inspired oxygen that varies with ventilatory demand.
parasympathetic nervous system see parasympathetic nervous system.
peripheral nervous system the portion of the nervous system consisting of the nerves and ganglia outside the brain and spinal cord.
personal system in the general systems framework and theory of goal attainment, the unified self, a complex whole that is rational, conscious, and feeling and that sets goals and decides on the means of achieving them.
pituitary portal system hypothalamo-hypophysial portal system.
portal system an arrangement by which blood collected from one set of capillaries passes through a large vessel or vessels and another set of capillaries before returning to the systemic circulation, as in the pituitary gland (the hypothalamo-hypophysial portal system) or the liver (the hepatic portal circulation).
renin-angiotensin-aldosterone system see renin-angiotensin-aldosterone system.
respiratory system the group of specialized organs whose specific function is to provide for the transfer of oxygen from the air to the blood and of waste carbon dioxide from the blood to the air. The organs of the system include the nose, the pharynx, the larynx, the trachea, the bronchi, and the lungs. See also respiration and Plates 7 and 8.
reticular activating system see reticular activating system.
reticuloendothelial system see reticuloendothelial system.
safety system see safety system.
SI system see SI units.
skeletal system see skeletal system.
social system in the general systems framework and theory of goal attainment, an organized boundary system of social roles, behaviors, and practices developed to maintain balance for growth, development, and performance, which involves an exchange of energy and information between the person and the environment for regulation and control of stressors.
support system in the omaha system, the circle of friends, family, and associates that provide love, care, and need gratification; it may include church, school, workplace, or other groupings.
sympathetic nervous system see sympathetic nervous system.
Unified Medical Language system see unified medical language system.
Unified Nursing Language system see unified nursing language system.
unit dose system a method of delivery of patient medications directly to the patient care unit. Following review by a nurse, a copy of the physician's original order is sent to the pharmacy, where the pharmacist reviews it again. The pharmacist then fills the order and delivers the medication to the patient care unit, usually in a 24-hour supply. Each patient has an individual supply of medications prepared and labeled by the pharmacist.
urinary system the system formed in the body by the kidneys, ureters, urinary bladder, and urethra, the organs concerned in the production and excretion of urine.
urogenital system genitourinary system.
vascular system circulatory system.
vasomotor system the part of the nervous system that controls the caliber of the blood vessels.
Miller-Keane Encyclopedia and Dictionary of Medicine, Nursing, and Allied Health, Seventh Edition. © 2003 by Saunders, an imprint of Elsevier, Inc. All rights reserved.

a widely distributed collection of both free and fixed macrophages derived from bone marrow precursor cells by way of monocytes; their substantial phagocytic activity is mediated by immunoglobulin and the serum complement system. In both connective and lymphoid tissue, they may occur as free and fixed macrophages; in the sinusoids of the liver, as Kupffer cells; in the lung, as alveolar macrophages; and in the nervous system, as microglia.
Synonym(s): system of macrophages
Farlex Partner Medical Dictionary © Farlex 2012

(mon'ō-nū'klē-ăr fag'ō-sīt sis'těm)
A widely distributed family of both free and fixed macrophages derived from bone marrow precursor cells by way of monocytes; their substantial phagocytic activity is mediated by immunoglobulin and the serum complement system. In both connective and lymphoid tissue, they may occur as free and fixed macrophages; in the sinusoids of the liver, as Kupffer cells; in the lung, as alveolar macrophages; and in the nervous system, as microglia.
Medical Dictionary for the Health Professions and Nursing © Farlex 2012