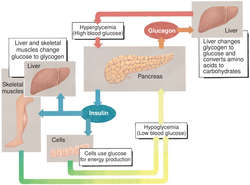 INSULIN AND GLUCAGON FUNCTIONS
A hormone secreted by the beta cells of the pancreas. As a drug, insulin is used principally to control diabetes mellitus. Insulin therapy is required in the management of type 1 diabetes mellitus because patients with this illness do not make enough insulin on their own to survive. The drug also is used in the care of patients with gestational diabetes to prevent fetal complications caused by maternal hyperglycemia (insulin itself does not cross the placenta or enter breast milk). In type 2 diabetes mellitus, its use typically is reserved for those patients who have failed to control their blood sugars with diet, exercise, and oral drugs. See: illustration; diabetes mellitus

Insulin preparations differ with respect to the speed with which they act and their duration and potency following subcutaneous injection. See: table

In the past, insulin for injection was obtained from beef or swine pancreas. These peptides differed from human insulin by a few amino acids, causing some immune reactions and drug resistance. Most insulin now in use is made by recombinant DNA technology and from an immunological perspective is equivalent to human insulin.

In health, the pancreas secretes insulin in response to elevations of blood glucose, such as occur after meals. It stimulates cells, esp. in muscular tissue, to take up sugar from the bloodstream. It also facilitates the storage of excess glucose as glycogen in the liver and prevents the breakdown of stored fats. In type 1 diabetes mellitus, failure of the beta cells to produce insulin results in hyperglycemia and ketoacidosis.

The insulin dosage should always be expressed in units. There is no average dose of insulin for diabetics; each patient must be assessed and treated individually Doses are titrated gradually to achieve near normal glucose levels, about 90–125 mg/dl.

The FDA requires that all preparations of insulin contain instructions to keep in a cold place and to avoid freezing.

Those who use insulin should wear an easily seen bracelet or necklace stating that they have diabetes and use the drug. This helps to ensure that patients with hypoglycemic reactions will be diagnosed and treated promptly.

A rapidly acting insulin administered subcutaneously, with action similar to that of insulin lispro. Aspartic acid replaces proline at a crucial position in the insulin molecule.

An insulin preparation that includes two components, typically a rapidly acting insulin, e.g., regular insulin, and an insulin that has a longer duration of action, e.g., NPH insulin.

A form of insulin that provides basal insulin coverage throughout the day, with little variation in drug levels. It is typically administered as a single injection (often at bedtime) and is usually part of a regimen that includes multiple injections of short-acting insulins or multiple doses of metformin at meal time. It is made by changing the glycine and arginine content of the insulin polypeptide.

Insulin prepared by recombinant DNA technology utilizing strains of Escherichia coli. In its effect it is similar to insulins secreted by the human pancreas. Trade names are Humulin and Novolin. Synonym: Novolin 70/30 See: Humulin 50/50; Humulin 70/30; insulin for table

Insulin given by inspiration, with the use of an inhaler. It may be composed of liquid droplets or a dry powder. One inhaled insulin product was removed from use in 2008 because of its adverse effects on the lungs.

Intermediate-acting insulin with onset in 1 2 to 1 hr and a duration of 18 to 28 hr.
See: insulin for table

A synthetic insulin with a very rapid onset and short duration of action. Diabetic patients typically use it immediately before meals to prevent postprandial hyperglycemia. Its absorption is more rapid than regular insulin. It is made by reversing the amino acids lysine and proline in the beta chain of the insulin polypeptide (hence its name lispro).

Long-acting insulin with onset in 6 to 8 hr and a duration of 30 to 36 hr.
See: insulin for table

Highly purified insulin that contains less than 10 parts per million of proinsulin, which is capable of inducing formation of anti-insulin antibodies. Synonym: monocomponent insulin

Insulin made by the use of recombinant DNA technology.

Long-acting insulin with onset in 5 to 8 hr and duration of more than 36 hr.

Fast-acting insulin with onset less than 1 hr and a duration of 12 to 16 hr.
* These times are estimates and may vary in individual patients. ** Contain NPH plus a rapid-acting insulin (Aspart, Lispro, or Regular); Novolog 70/30 contains 70% NPH, 30% Novolog
Medical Dictionary, © 2009 Farlex and Partners