[mi-krog´le-ah]
non-neural cells forming part of the adventitial structure of the central nervous system. They are migratory and act as phagocytes of waste products of the nervous system. adj., adj microg´lial.
Miller-Keane Encyclopedia and Dictionary of Medicine, Nursing, and Allied Health, Seventh Edition. © 2003 by Saunders, an imprint of Elsevier, Inc. All rights reserved. 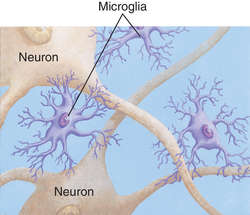 (mi-krog'le-a) [? + glia, glue]
Cells of the central nervous system (CNS) present between neurons or next to capillaries. These cells may function as macrophages when they migrate to damaged CNS tissue.
See: gitter cell; illustration
Medical Dictionary, © 2009 Farlex and Partners

Feedback
Flashcards & Bookmarks ?
Please log in or register to use Flashcards and Bookmarks. You can also log in with
Flashcards ?
My bookmarks ?
+ Add current page to bookmarks
Mentioned in ?
References in periodicals archive ?
The expressions of pro-inflammation genes of BV-2 microglia cells, including tumor necrosis factor-a (TNF)-a, IL-1[sz], and inducible nitric oxide synthase (iNOS), were detected by quantitative real-time PCR.
Could Intrathymic Injection of Myelin Basic Protein Suppress Inflammatory Response After Co-culture of T Lymphocytes and BV-2 Microglia Cells?
Since SPARC is a widely expressed profibrotic protein that modulates tissue physiology by altering cell-extracellular matrix interactions, it has the potential to mediate microglia cell proliferation and migration.
The Role of Microglia in Diabetic Retinopathy
Inflammation and ischaemia--role of microglia cells
Potential of immunosuppressive agents in cerebral ischaemia
This year, Francis Lau, a molecular biologist in the Neuroscience Laboratory, published a study that investigated whether blueberry extracts could have a preventive effect on inflammatory signals coming from activated microglia cells.
Nutrition & brain function: food for the aging mind
Through a research grant, electroCore intends to provide up to one million dollars over a four-year period to Massachusetts General Hospital to conduct multiple preclinical studies, including initial work initiated in the second quarter of 2018 in the following areas: The effects of nVNS on persistent neuroinflammation and the neurological outcomes after concussive traumatic brain injury; and The effects of nVNS on microglia cells and their association with the development and progression of Alzheimer's disease.
ElectroCore announces research collaboration with MGH
They will also look at the collective impact on the microglia cells that protect the brain from injury, and experiment with the promising new drug.
Stem Cells Reengineered To Act Like Brain Neurons May Treat Alzheimer's
Chemockine (C-C motif) ligand 2 (CCL2), a gene encoding for a factor recruiting inflammatory cells during the inflammatory response [32], was upregulated (2.1 [+ or -] 0.6-fold, n = 4) in microglia cells from LPS-treated animals (Figure 1(a)).
Thrombin Inhibition Reduces the Expression of Brain Inflammation Markers upon Systemic LPS Treatment
It is ascertained that A[beta] oligomers and fibrils stimulate microglia cells in a different manner [14,15].
Activation of Macrophages by Oligomeric Proteins of Different Size and Origin
Ghrelin blocks the TLR4/IKK/NF-[kappa]B pathway activation in microglia cells by indirect effects.
Central Modulation of Neuroinflammation by Neuropeptides and Energy-Sensing Hormones during Obesity
Expression of TNF-[alpha] and IL-1[beta] in microglia cells (arrows) is markedly enhanced following MCAO, but a noticeable reduction in TNF-[alpha] and IL-1[beta] expression can be observed in the activated microglia in the LXW7-treated rat brain.
LXW7 ameliorates focal cerebral ischemia injury and attenuates inflammatory responses in activated microglia in rats
The researchers found that during the first week of stress exposure, microglia cells undergo a phase of proliferation and activation, reflected by increased size and production of specific inflammatory molecules, after which some microglia begin to die.
Scientists Find New Mechanism Underlying Depression