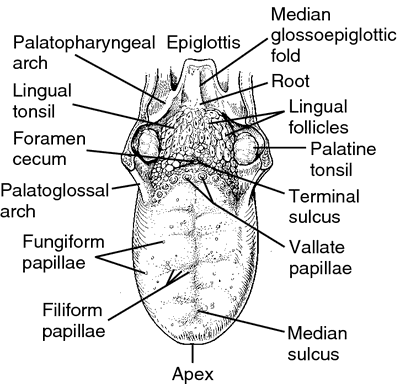 1. in canines, a disorder associated with a deficency of nicotinic acid.
2. black to yellowish-brown discoloration of the dorsum of the tongue due to staining by exogenous material such as the components of tobacco; usually superimposed on hairy tongue.
Synonym(s): black hairy tongue, lingua nigra, melanoglossia, nigrities linguae
Farlex Partner Medical Dictionary © Farlex 2012
(1) A hyperpigmented tongue seen in dogs with niacin deficiency, equivalent to pellagra
(2) The natural colour of the tongue of the chow-chow and shar-pei breeds of dogs. Regarded as a form of benign pigmentation, any dog can have a black tongue
Segen's Medical Dictionary. © 2012 Farlex, Inc. All rights reserved.

(blak tŭng)
Black to yellowish-brown discoloration of the dorsum of the tongue due to staining by exogenous material such as the components of tobacco or the use of broad spectrum antibiotics; usually superimposed on hairy tongue.
Synonym(s): black hairy tongue, lingua nigra, melanoglossia.
Medical Dictionary for the Health Professions and Nursing © Farlex 2012