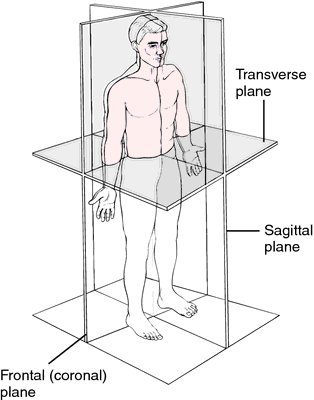 The sagittal plane that divides the body into right and left, and which courses from the tip of the nose, chin, laryngeal prominence (Adam's apple), umbilicus and pubic symphysis.
Segen's Medical Dictionary. © 2012 Farlex, Inc. All rights reserved.

(mē'dē-ăn plān) [TA]
A vertical plane through the midline of the body that divides the body into right and left halves.
Synonym(s): midsagittal plane.
Medical Dictionary for the Health Professions and Nursing © Farlex 2012

The vertical plane that divides the body into right and left halves.
Collins Dictionary of Medicine © Robert M. Youngson 2004, 2005

(mē'dē-ăn plān) [TA]
A plane vertical in the anatomic position, through the midline of the body that divides the body into right and left halves.
Medical Dictionary for the Dental Professions © Farlex 2012

Feedback
Flashcards & Bookmarks ?
Please log in or register to use Flashcards and Bookmarks. You can also log in with
Flashcards ?
My bookmarks ?
+ Add current page to bookmarks
Mentioned in ?
References in periodicals archive ?
(11) Length of the cranium (upper neurocranium length) from the most aboral point on the vertex of the cranium in the median plane to the median point of the line joining the aboral borders of the supraorbital foramina A-Sp (Akrokranion Supraorbitale).
Craniometrie Characteristics and Cranial Indices of Polish Heath Sheep Rams--Extended Data/Caracteristicas Craneometricas e Indices Craneales de Ovejas Heath Polacas--Datos Ampliados
Part interpretation based on proposed InspF 2.--InspF Median plane of planes * S1, S2.
Inspection feature for inspection process planning
The oblique stimuli form two groups distinguished by their orientation with respect to the observer's median plane (45[degrees] or 315[degrees]), but since they were symmetrically disposed about that plane, they are both considered to embody the same degree of obliquity.
Sex differences in spatial visualization of Kuwaiti school children
Such stimuli need not be either co-planar or in a plane orthogonal to the participant's median plane (see Fig.
The role of left--right symmetry in the encodement of spatial orientations
Spectral cues used in the localization of sound sources on the median plane. Journal of the Acoustical Society of America, 56, 1829-1834.
The impact of signal bandwidth on auditory localization: implications for the design of three-dimensional audio displays
The skull was placed with the Frankfort plane (Lundstrom & Lundstrom, 1995) parallel to the floor and the axis of the light beam in the median plane. In the edentulous skulls a support was placed interdentally to leave an intercrestal space of approximately 15 mm; for this purpose, thick, non-deforming foam wedges were used to simulate the presence of teeth, thus maintaining the vertical dimension of the skull and the stability of the temporomandibular articulation.
Quantification by Quadrants of the Distortion Present in Conventional Panoramic Radiograph/Cuantificacion por Cuadrantes de la Distorsion Presente en la Radiografia Panoramica Convencional
8 shows the dimensionless kinetic energy in the median plane of z-direction for the different turbulence models.
RANS simulations of turbulent and thermal mixing in a T-junction/Suoliu modeliavimas T jungtyse turbulentinio ir silumos maisymo sistemose
(1991) also observed reductions in masking of about 6 dB when the signal was vertically separated from the masker within the median plane. In this case, there were minimal changes in interaural parameters when the signal and masker were separated.
Effects of frequency on free-field masking
It was situated in the median plane extending from the hyoid bone to the front of cricoid cartilage.
Ectopic thyroid tissue with a rare vascular variation/tejido tiroideo ectopico con una rara variacion vascular
In figure 3 and 4 we are presented the results using MEF for the hydrodynamics pressure distribution in bearing median plane for "oval" and "rippled" form of interior surface.
The analyze of working mode of sliding bearings using finite elements method
We attempted RA using curvilinear probe, but were not successful in median as well as in para median planes.
ANESTHETIC MANAGEMENT OF A PATIENT WITH ANKYLOSING SPONDYLITIS PRESENTING WITH FRACTURE FEMUR - A CASE REPORT
2, it can be observed that the centers of the spheres will be permanently located in median planes of the grooves in which they are placed.
Considerations upon a new tripod joint solution/Nauja trikojo lanksto konstrukcija