[ko-les´ter-ol]
a steroid alcohol found in animal fats and oils, bile, blood, brain tissue, milk, egg yolk, myelin sheaths of nerve fibers, liver, kidneys, and adrenal glands. It is a precursor of bile acids and steroid hormones, and it occurs in the most common type of gallstone, in atheroma of the arteries, in various cysts, and in carcinomatous tissue. Most of the body's cholesterol is synthesized by the liver, but some is obtained in the diet from animal-derived foods. Plant-derived foods are cholesterol-free. Cholesterol is not transported free in the blood but is bound to certain proteins to form lipoproteins. Two important fractions of the serum lipoproteins are high-density lipoproteins (HDL) and low-density lipoproteins (LDL).

Because HDL-C promotes the removal of excess cholesterol from the cells and its excretion from the body, it is thought to be beneficial rather than harmful. In contrast, LDL-C picks up cholesterol from ingested fats and from cells that synthesize it in the body and delivers it to blood vessels and muscles where it is deposited in the cells. The concentration of cholesterol in cells within the linings of the arteries contributes to the build-up of atherosclerotic plaques. (See also atherosclerosis.)

A third type of lipoprotein is known as very-low-density lipoprotein (VLDL). There is a preponderance of triglyceride and very little cholesterol in VLDL. Triglyceride is the basic type of lipid used for the storage of energy. The role of serum triglyceride in the formation of atherosclerotic plaques is not known. Those persons who are at high risk for heart disease, already have a heart condition, or are obese should limit the amount of fats and cholesterol in the foods they eat. LDL-C levels can be reduced by limiting dietary intake of saturated fat and cholesterol. Organ meats and egg yolks are high in cholesterol. HDL-C levels can be raised by exercise, stopping cigarette smoking, and losing excess body fat. 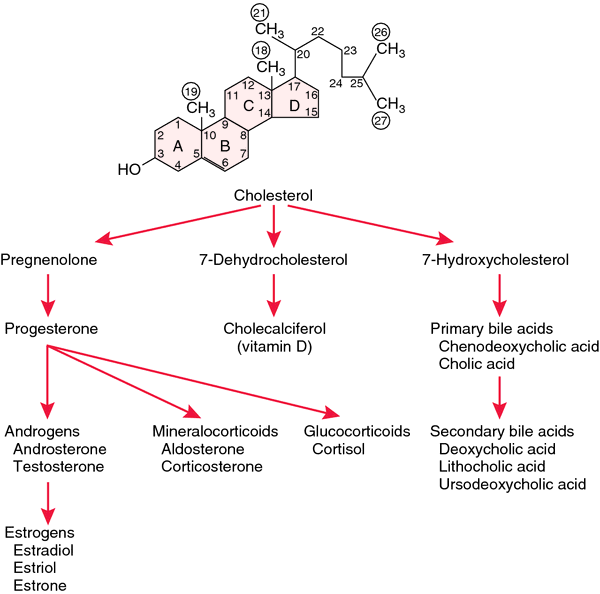 Increased levels of cholesterol in the blood are found in cardiovascular disease and atherosclerosis, obstructive jaundice, hypothyroidism, nephrosis, and uncontrolled diabetes mellitus. Cholesterol exists in both a free and esterified form; the ratio of free to esterified cholesterol is significant in the diagnosis of certain diseases. For example, there is a markedly abnormal ratio of these two forms of cholesterol in hepatic biliary disease, infectious diseases, and extreme cholesterolemia.

Decreased levels of cholesterol in the blood are noted when there is malabsorption of cholesterol from the intestinal tract as in pernicious anemia, hemolytic jaundice, hyperthyroidism, and terminal cancer.
Miller-Keane Encyclopedia and Dictionary of Medicine, Nursing, and Allied Health, Seventh Edition. © 2003 by Saunders, an imprint of Elsevier, Inc. All rights reserved.

(kō-les'ter-ol),
5-cholesten-3β-ol (cholestane with a 5,6 double bond and a 3β-hydroxyl group); the most abundant steroid in animal tissues, especially in bile and gallstones, and present in food, especially food rich in animal fats; circulates in the plasma complexed to proteins of various densities and plays an important role in the pathogenesis of atheroma formation in arteries; a precursor of steroid hormones.
See also: lipoprotein.
Farlex Partner Medical Dictionary © Farlex 2012

(kə-lĕs′tə-rôl′, -rōl′)
n.
A white crystalline substance, C27H45OH, that is found in animal tissues and various foods and is important as a constituent of cell membranes and a precursor to steroid hormones. Cholesterol is normally synthesized by the liver and is transported through the bloodstream by different types of lipoproteins, two of which (HDL and LDL) are routinely measured in blood tests.
The American Heritage® Medical Dictionary Copyright © 2007, 2004 by Houghton Mifflin Company. Published by Houghton Mifflin Company. All rights reserved.

A 27-carbon precursor of steroid hormones and bile acids which is an integral component of cell membranes and plasma lipoproteins; it is a precursor of bile acids and important in the synthesis of steroid hormones. It is the main component of the most common type of gallstones and is a major constituent of arterial atheromas; increased cholesterol is associated with ASHD, CAD, increased risk of death due to acute MIs and strokes.

Metabolism
Cholesterol is absorbed from ingested foods—diets high in saturated (animal) fats increase cholesterol levels—and synthesised in the liver. HDL-C is metabolised efficiently, and thus is “good” cholesterol; “bad cholesterol”, LDL-C, is inefficently metabolised; when the total cholesterol (TC) is increased (usually = 200 mg/dL), it is common practice to measure the levels of HDL-cholesterol and LDL-cholesterol.

Lab
TC is measured in routine chemistry panels; cholesterol is transported in the circulation by carrier proteins, which are classified according to their density (HDL, LDL, VLDL) based on density-gradient ultracentrifugation.

Biochemistry A precursor of steroid hormones and bile acids; it is an integral component of cell membranes and plasma lipoproteins, and found in animal fats, bile, blood, brain, milk, egg yolk, myelin sheaths, liver, kidneys, and adrenal glands; it is absorbed from the diet and synthesized in the liver; diets high in saturated–animal fats ↑ cholesterol levels; it is the main component of the most common type of gallstones, and integral to arterial atheromas, in cysts and in malignancy; it is a precursor of bile acids and important in the synthesis of steroid hormones; diets low in saturated fats ↓ cholesterol levels, as does exercise; ↑ cholesterol is associated with ASHD, CAD, ↑ risk of death due to acute MIs and strokes; total cholesterol–TC is measured in routine chemistry panels; cholesterol is transported in the circulation by carrier proteins, which are classified according to their density–high-density lipoprotein—HDL, LDL, VLDL, based on density gradient ultracentrifugation; HDL-C is metabolized efficiently, and thus is 'good' cholesterol; 'bad cholesterol,' LDL-C, is inefficently metabolized High risk for ASHD TC > 6.21 mmol/L–US > 240 mg/dL; LDL-C > 160 mg/dl, HDL-C
< 35 mg/dl Borderline risk 5.17-6.18 mmol/L–US: 200-239 mg/dL Low risk < 5.17 mmol/L–US 200 mg/dL, LDL-Cl < 130 mg/dL, HDL-C > 55 mg/dL ↑ in Hypercholesterolemia, nephrotic syndrome, hypothyroidism, biliary cirrhosis ↓ in Malnutrition, hyperthyroidism, colorectal CA Management, ↑ cholesterol Diet–↓ saturated fats, weight loss, regular exercise, medications. See Bad cholesterol, Fish, Good cholesterol, HDL, Hypercholesterolemia, LDL, RLP, VLDL.
McGraw-Hill Concise Dictionary of Modern Medicine. © 2002 by The McGraw-Hill Companies, Inc.

(kŏ-les'tĕr-ol)
The most abundant steroid in animal tissues; circulates in the plasma complexed to proteins of various densities; plays an important role in the pathogenesis of atheroma formation in arteries.
Medical Dictionary for the Health Professions and Nursing © Farlex 2012

An essential body ingredient found in all human cells, mainly as part of the structure of the cell membranes. It is needed to form the essential steroid hormones, CORTISOL, corticosterone and ALDOSTERONE, the male and female sex hormones and the bile acids. It is synthesized in the liver and a large quantity of cholesterol passes down the bile duct into the intestine every day. Most of it is reabsorbed. A diet high in saturated fats encourages high blood cholesterol levels. Soluble dietary fibre and various drugs can bind intestinal cholesterol and prevent its reabsorption. Cholesterol is carried to the tissues in tiny cholesterol carriers called low density lipoproteins (LDLs). Oxidation of these allows cholesterol to be deposited in the walls of arteries causing dangerous narrowing (ATHEROSCLEROSIS).
Collins Dictionary of Medicine © Robert M. Youngson 2004, 2005

a steroid that occurs in the cell membranes of animal cells, but not in plants. Cholesterol is produced in the liver and when in excess is excreted in the bile but is partly reabsorbed by the ileum. It may precipitate gallstones in the gallbladder or bile duct. Alternatively, if there is excess cholesterol in the blood, it may be deposited on the walls of the blood vessels, obstructing them and often leading to an intravascular clot which if it occurs in the region of the heart gives rise to a ‘heart attack’ or coronary thrombosis. Cholesterol is the precursor of animal steroid hormones and bile acids.
Collins Dictionary of Biology, 3rd ed. © W. G. Hale, V. A. Saunders, J. P. Margham 2005

A fat-like substance that is made by the human body and eaten in animal products. Cholesterol is used to form cell membranes and process hormones and vitamin D. High cholesterol levels contribute to the development of atherosclerosis.
Mentioned in: Atherosclerosis, Cholesterol-Reducing Drugs, Hypolipoproteinemia, Lipoproteins Test, Rickets, Vitamin D Deficiency
Gale Encyclopedia of Medicine. Copyright 2008 The Gale Group, Inc. All rights reserved.

(kŏ-les'tĕr-ol)
The most abundant steroid in animal tissues; circulates in the plasma complexed to proteins of various densities; plays an important role in the pathogenesis of atheroma formation in arteries.
Medical Dictionary for the Dental Professions © Farlex 2012

Q. How to lower high cholesterol? The Doctor told my husband that his cholesterol levels are very high and that he has to lower them immediately. What foods are low in cholesterol and what foods should I be cooking for him to eat?

A. Any treatment of high cholesterol first begins with some lifestyle changes. This involves three simple, yet often difficult to execute, steps: improved diet, increased physical activity, and weight management.
Make sure your Husband is eating unsaturated fats instead of saturated and trans fats, avoiding cholesterol, increasing dietary fiber, and consuming more plant sterols/stanols. Increase his vegetables and whole grains intake, but decrease the fat, salt and sugar intakes.
Also, it will be easier for him to stick to his diet if the whole family changes their eating habits and eats healthier too. Start cooking healthy meals for the whole family and not just for him.

Q. I have high cholesterol. What I need to do in order to reduce him?

A. Cholesterol can’t dissolve in the blood. It has to be transported to and from the cells by carriers called lipoproteins. Low-density lipoprotein, or LDL, is known as “bad” cholesterol. High-density lipoprotein, or HDL, is known as “good” cholesterol. These two types of lipids, along with triglycerides and Lp(a) cholesterol, make up your total cholesterol count, which can be determined through a blood test. If your total cholesterol is 200 mg/dL or greater, or if your HDL is less than 40 mg/dL, then you will probably need treatment.
More discussions about cholesterol
This content is provided by iMedix and is subject to iMedix Terms. The Questions and Answers are not endorsed or recommended and are made available by patients, not doctors.