[di-sak´ah-rid, di-sak´ah-rīd]
any of a class of sugars each molecule of which yields two molecules of monosaccharide on hydrolysis.
Miller-Keane Encyclopedia and Dictionary of Medicine, Nursing, and Allied Health, Seventh Edition. © 2003 by Saunders, an imprint of Elsevier, Inc. All rights reserved.

A disaccharide composed of two glucose molecule joined by a 1–>4 bond via a condensation reaction when amylase breaks down starch, as occurs in germinating seeds such as barley.
Segen's Medical Dictionary. © 2012 Farlex, Inc. All rights reserved.

(mawl'tōs)
A disaccharide formed in the hydrolysis of starch and consisting of two d-glucose residues.
Medical Dictionary for the Health Professions and Nursing © Farlex 2012

A disaccharide sugar consisting of two linked molecules of glucose. It is produced by the enzymatic splitting, during digestion, of starches and glycogen.
Collins Dictionary of Medicine © Robert M. Youngson 2004, 2005 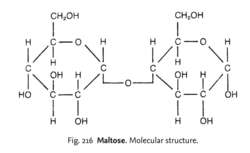 a disaccharide CARBOHYDRATE consisting of two GLUCOSE units linked by a GLYCOSIDE bond and common in germinating barley (see Fig. 216 ). The barley seeds are soaked in water, initiating the release of large amounts of AMYLASE, a hydrolytic enzyme that breaks down stored starch into maltose, a reducing sugar.
Collins Dictionary of Biology, 3rd ed. © W. G. Hale, V. A. Saunders, J. P. Margham 2005

(mawl'tōs)
A disaccharide formed in the hydrolysis of starch and consisting of two d-glucose residues.
Medical Dictionary for the Dental Professions © Farlex 2012