Hereditary thinning of hair induced by androgens in genetically susceptible men and women, which occurs in ± 50% of the general population between age 12 and 40.

Mechanism
Dihydrotestosterone binds to androgen receptors of susceptible scalp hair follicles, activating genes that gradually transform large terminal hair follicles to miniature follicles, producing finer hair in shorter hair cycles. Dihydrotestosterone is formed by peripheral conversion of testosterone by one of two isoforms of 5α-reductase, which, with other enzymes, regulate specific steroid transformations in skin. Those with AA have increased 5α-reductase, increased androgen receptors and decreased cytochrome P-450 aromatase, which converts testosterone to estradiol in hair follicles in the frontal scalp. 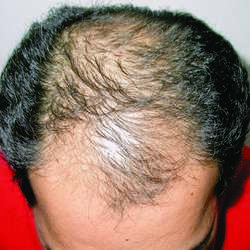 The typical pattern of baldness in males in which the baldness begins in the frontal area and proceeds until only a horseshoe area of hair remains in the back and at the temples. It is due to testosterone, but genetic predisposition is also a factor. Baldness does not usually occur in males having no familial tendency to become bald. Minoxidil or finasteride has helped stimulate growth of hair in some individuals. Synonym: male-pattern alopecia See: illustration
illustration
See also: baldness
Medical Dictionary, © 2009 Farlex and Partners

Feedback
Flashcards & Bookmarks ?
Please log in or register to use Flashcards and Bookmarks. You can also log in with
Flashcards ?
My bookmarks ?
+ Add current page to bookmarks
Mentioned in ?
References in periodicals archive ?
Male-pattern baldness is usually inherited and it also affects women.
2 MINUTES ON..
It's likely you have androgentic alopecia -better known as male-pattern baldness -where the hair is lost at the temples and the crown.
The Mag: HERE TO HELP- Dr FORSTER: How can I stop my hair getting thinner?; Dr George Forster answers your questions
The medical name of the most common type of hair loss is androgenic alopecia, otherwise known as male-pattern baldness. In men it causes early balding, which often starts with a receding hairline and a bald patch on the crown.
Women can go bald too; Your Doctor: DR MARK PORTER, TV'S TOP GP, SOLVES YOUR HEALTH WORRIES
Receding hairline Male-pattern baldness tends to follow a set pattern.
2 MINUTES ON..
AIF you are male, it is probably male-pattern baldness, which is a natural process.
Vital: ask the Doc; Craig Lennox, Our GP expert will answer your questions every week
QI'M a 24--year-old male and have male-pattern baldness. My scalp is itchy, but I don't have dandruff.
Vital: Health - DOC'S - q&a
Japanese researchers found six studies, involving 40,000 men, showed a connection between male-pattern baldness and coronary heart disease.
Medical news; BAD NEWS FOR BALDING MEN
Most dermatologists accept that a major cause of inherited male-pattern baldness is over-sensitivity of the hair follicles to the hormone dihydro- testosterone.
BALDIES: GET A NEW COW'S LICK
An example of a familial characteristic is male-pattern baldness. An example of a familial disorder would be hyperlipidaemia, which is abnormally high levels of fat in the blood.
What's the difference?