[mag″nĭ-fĭ-ka´shun]
1. apparent increase in size, as under the microscope.
2. the process of making something appear larger, as by use of lenses.
3. the ratio of apparent (image) size to real size.
Miller-Keane Encyclopedia and Dictionary of Medicine, Nursing, and Allied Health, Seventh Edition. © 2003 by Saunders, an imprint of Elsevier, Inc. All rights reserved.

(mag'ni-fi-kā'shŭn),
1. The seeming increase in size of an object viewed under the microscope; when noted, this increased size is expressed by a figure preceded by ×, indicating the number of times its diameter is enlarged.
2. The increased amplitude of a tracing, as of a muscular contraction, caused by the use of a lever with a long writing arm, that is, one in which the fulcrum is placed nearer to the muscle than to the writing point.
[L. magnifico, pp. -atus, to magnify]
Farlex Partner Medical Dictionary © Farlex 2012

(mag'ni-fi-kā'shŭn)
1. The seeming increase in size of an object viewed under the microscope; when written, this increased size is expressed by a figure preceded by ×, indicating the number of times its diameter is enlarged.
2. The increased amplitude of a tracing, as of a muscular contraction, caused by the use of a lever with a long writing arm.
[L. magnifico, pp. -atus, to magnify]
Medical Dictionary for the Health Professions and Nursing © Farlex 2012 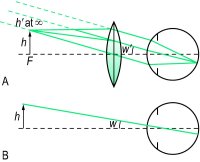 Fig. M4 Object h viewed, A, with a loupe and placed at its anterior principal focus F, and B, without

Feedback
Flashcards & Bookmarks ?
Please log in or register to use Flashcards and Bookmarks. You can also log in with
Flashcards ?
My bookmarks ?
+ Add current page to bookmarks
Mentioned in ?
References in periodicals archive ?
However, if the scope you're considering has a maximum magnification of more than 10X and you plan on living in the top half of the magnification range, FFP reticles are the way to go.
RETICLE RECONCILIATION
We normally turn magnification up to aim at a more distant target, so prefer a "shrinking" reticle--though in reality the reticle stays the same size, while the target grows larger with more magnification.
PLANE TALK ON RETICLES: 1ST OR END PLANE ... DOES IT MATTER?
(5) However, the College of Optometrists' guidelines do recommend: 'If the optometrist is not comfortable with his or her expertise in examining the patient with low vision, or if they cannot offer a low vision service, he/she should refer the patient to someone who can.' (6) This article concentrates on the types of basic magnification aids that can be stocked and easily dispensed in community practice.
Low vision aids: keeping it simple: This article takes a back-to-basics approach to using simple low vision aids that can be easily dispensed from the consulting room
Fauth usually employed magnifications of only 25x per inch with his 6-, 7-, and 15-inch refractors, reserving the highest magnifications of only 38x per inch only for the finest nights.
How high is too high? Choose the right magnification for your planetary observing
Recent developments in medicine have shown that magnification and microsurgery can greatly improve clinical practice.
Periodontal microsurgery: a changing perspective
Commonly, image magnification is accomplished through convolution of the image samples with a single kernel--typically the nearest neighbour [1--4] bilinear, bicubic [3--5] or cubic B-spline kernel [3, 4, 6] interpolation, triangle based [3, 4, 7] and training-based algorithms [3, 4, 8, 9] that use artificial neural networks.
Image magnification method comparison/Vaizdo didinimo metodu palyginimas
2,500x magnification on a FEI scanning electron microscope, horizontal field width: 125 micron, 2002.
Philips Research laboratories, the Netherlands FEI Company, USA
The first thing to understand is exit pupil and relative brightness at a scope's highest available magnification.
Outsized objectives: are you getting the full benefit of your large objective riflescope?
7), with its ten reference photographs, has been used when comparing a carbon black filled compound at 30x magnification (see ASTM D2663, Method A).
Dispersion measurements using video techniques
The microscope, in concert with a variety of available eyepieces and supplemental objectives, produces magnifications from 3.2 to 640X and achieves 600-line pairs/mm resolution.
Magnification system
The resulting samples then were examined unetched and etched with a metallurgical microscope of magnifications up to 1000X.
Investigating Cast Iron Defects: Four Foundries' Experiences
Zooming in on the smoke shows that it remains reasonably realistic even to great magnifications, yet the same data base is used thoughout.
Packing it in; fractals play an important role in image compression