(Mg) [mag-ne´ze-um]
a chemical element, atomic number 12, atomic weight 24.312. (See Appendix 6.) Its salts are essential in nutrition, being required for the activity of many enzymes, especially those concerned with oxidative phosphorylation. It is found in the intra- and extracellular fluids and is excreted in urine and feces. The normal serum level is approximately 2 mEq/L. Magnesium deficiency causes irritability of the nervous system with tetany, vasodilation, convulsions, tremors, depression, and psychotic behavior. 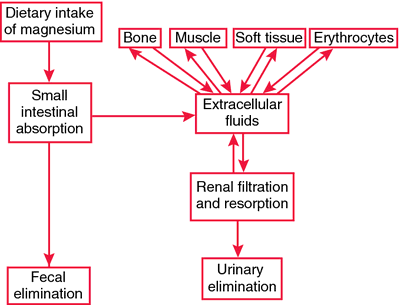 Homeostasis of magnesium in extracellular fluids. The normal serum magnesium level is regulated by intestinal and renal function. Most of the body's magnesium is stored in bones, muscle, and soft tissue. From Malarkey and McMorrow, 2000.
magnesium carbonate an antacid.
magnesium chloride an electrolyte replenisher and a pharmaceutic necessity for hemodialysis and peritoneal dialysis fluids.
magnesium citrate a saline laxative used for bowel evacuation before diagnostic procedures or surgery of the colon; administered orally.
magnesium hydroxide an antacid and cathartic.
magnesium oxide an antacid and a sorbent in pharmaceutical preparations; called also magnesia.
magnesium salicylate see salicylate.
magnesium silicate MgSiO3, a silicate salt of magnesium; the most common hydrated forms found in nature are asbestos and talc.
magnesium sulfate Epsom salt; an anticonvulsant and electrolyte replenisher, also used as a laxative and local antiinflammatory.
magnesium trisilicate a combination of magnesium oxide and silicon dioxide with varying proportions of water; used as a gastric antacid.

(mag-nē'zē-ŭm),
An alkaline earth element, atomic no. 12, atomic wt. 24.3050, which oxidizes to magnesia; a bioelement, many salts have clinical applications.
[Mod. L. fr. G. Magnēsia, a region in Thessaly in Greece]

(mag-nē'zē-ŭm)
An alkaline earth element, atomic no. 12, atomic wt. 24.3050, which oxidizes to magnesia; a bioelement; many salts have clinical applications.
[Mod. L. fr. G. Magnēsia, a region in Thessaly in Greece]

(mag-nē'zē-ŭm)
An alkaline earth element, which oxidizes to magnesia; a bioelement, many salts have clinical applications.
[Mod. L. fr. G. Magnēsia, a region in Thessaly in Greece]

Feedback
Flashcards & Bookmarks ?
Please log in or register to use Flashcards and Bookmarks. You can also log in with
Flashcards ?
My bookmarks ?
+ Add current page to bookmarks
TheFreeDictionary presents:
Write what you mean clearly and correctly.
Mentioned in ?
References in periodicals archive ?
Low magnesium intake is associated with an increased risk of stroke in several observational studies [163-165], which can be explained by the beneficial role of magnesium in endothelial function, platelet aggregation, blood pressure, and glycemic control as discussed in the previous section.
Several studies have indicated that dietary magnesium and intravenous magnesium sulfate infusion were associated with an improvement in lung function, as measured by forced vital capacity (FVC) and forced expiratory volume (FEV) [169, 170].
A single dose of intravenous magnesium sulfate (1.2 g) has been recommended for the management of acute severe and life-threatening exacerbation of asthma [171].
However, a systemic review of four RCTs has failed to show any significant therapeutic effect of intravenous or inhaled magnesium used in the treatment of COPD [177].
Magnesium and Human Health: Perspectives and Research Directions
Blood levels of magnesium have an impact on bone density.
Low dietary magnesium levels may lead to decreased secretion of a hormone responsible for bone maintenance.
Researchers at MIT discovered a special form of magnesium, called magnesium L-threonate that plays a key role in the way neurons connect and communicate with each other.
In a rat study, this special form of magnesium has been found to penetrate the blood-brain barrier, which led to improved learning abilities, working memory, and enhanced long- and short-term memory.
MAGNESIUM: Brain and Bone Benefits
Table-V: Comparison of mean serum magnesium levels between males and females (n=50).
We studied 50 Pakistani men and women fulfilling the inclusion/exclusion criteria to determine mean magnesium levels in diabetic patients with retinopathy.
Mean serum magnesium levels were similar amongst the participants aged 20-40 years and 41-65 years (1.15 +- 0.14 vs.
SERUM MAGNESIUM LEVELS IN DIABETIC RETINOPATHY
ANXIETY A STUDY in France of 264 patients with generalised anxiety disorder found that a statistically significant number of men and women reported improvements in symptoms on a magnesium regimen.
Could you be magnesium deficient?