[lim´fo-sīt]
any of the mononuclear nonphagocytic leukocytes found in the blood, lymph, and lymphoid tissues; they comprise the body's immunologically competent cells and their precursors. They are divided on the basis of ontogeny and function into two classes, B and T lymphocytes, responsible for humoral and cellular immunity, respectively. Most are small lymphocytes 7–10 μm in diameter with a round or slightly indented heterochromatic nucleus that almost fills the entire cell and a thin rim of basophilic cytoplasm that contains few granules. When activated by contact with antigen, small lymphocytes begin macromolecular synthesis, the cytoplasm enlarges until the cells are 10–30 μm in diameter, and the nucleus becomes less completely heterochromatic; they are then referred to as large lymphocytes or lymphoblasts. These cells then proliferate and differentiate into B and T memory cells and into the various effector cell types, B cells into plasma cells and T cells into helper, cytotoxic, and suppressor cells. See subentries here and under cell. adj., adj lymphocyt´ic. 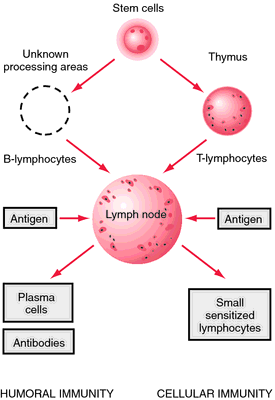 Origin of B- and T-lymphocytes responsible for cellular and humoral immunity. In response to antigens, B- and T-lymphocytes are sensitized by lymphoid tissue.
lymphocyte activation stimulation of lymphocytes by specific antigen or nonspecific mitogens resulting in synthesis of RNA, protein, and DNA and production of lymphokines; it is followed by proliferation and differentiation of various effector and memory cells. Activation is accompanied by morphologic changes known as lymphocyte transformation, in which small, resting lymphocytes are transformed into large, active lymphocytes (lymphoblasts); the formation of lymphoblasts is referred to as blastogenesis.
amplifier T l's a T lymphocyte of the CD8 cell type that modifies a developing immune response by releasing nonspecific signals to which other T lymphocytes (either effector or suppressor cells) respond.
B l's “bursa-equivalent” lymphocytes; a type that develop from stem cells in hematopoietic tissue, including the blood islands of the fetal yolk sac, the fetal liver and spleen, and the bone marrow. The B in the name refers to the bursa of fabricius, an organ in birds where B cell differentiation occurs; however, no analogous organ has been found in mammals. Called also B cells.

B lymphocytes are involved in humoral immunity, the secretion of antibodies. A mature B lymphocyte can be activated by the binding of an antigen to cell surface receptors. This induces proliferation of the cell, resulting in a clone of cells specific for that antigen. These cells can then differentiate and begin to secrete immunoglobulin (Ig) molecules; this step involves interaction with helper T lymphocytes. All the cells of a clone secrete Ig with identical antigen binding sites. Antibody-secreting cells can have the morphology of plasma cells, large lymphocytes, or lymphoblasts.
CD4 T l's (CD4+ T l's) CD4 cells.
CD8 T l's (CD8+ T l's) CD8 cells.
cytotoxic T l's differentiated T lymphocytes, marked by CD4 and CD8 antigens, able to recognize and lyse target cells bearing specific antigens recognized by their antigen receptors. The cytotoxic activity requires firm binding of the lymphocyte to the target cell to produce holes in its plasma membrane with loss of its cellular contents and osmotic lysis. These lymphocytes are important in graft rejection and killing of tumor cells and virus-infected host cells. Called also killer or killer T cells.
lymphocyte proliferation test a functional test of the ability of lymphocytes to respond to mitogens, specific antigens, or allogenic cells. The test with allogenic cells, called a mixed lymphocyte culture (MLC), is commonly performed for transplantation tissue typing; all three types of stimulants are used in investigation of immunodeficiency. Commonly used mitogens are phytohemagglutinin (PHA), concanavalin A (ConA), and pokeweed mitogen (PWM); commonly used antigens are PPD (tuberculin), Candida antigen, and streptokinase-streptodornase.
Rieder's lymphocyte a myeloblast with a nucleus and several wide, deep indentations suggesting lobulation, seen in Rieder's cell leukemia and sometimes chronic lymphocytic leukemia. Called also Rieder's cell.
T l's “thymus-dependent” lymphocytes; a type that originates from a stem cell in hematopoietic tissue and undergoes differentiation in the thymus when triggered by thymopoietin. Called also T cells.  When activated by antigens such as the CD4 antigen or the CD8 antigen, T lymphocytes differentiate into the various types of regulatory and effector T cells (see CD4 cells and CD8 cells).

The CD8 cells called cytotoxic T cells or killer T cells are responsible for cell-mediated cytotoxicity, which is the killing of cells bearing specific antigens, the mechanism involved in cell-mediated immunity, delayed hypersensitivity, and killing of tumor cells and transplant tissue cells. A subpopulation, the LAK cells, is involved in the production of lymphokines, substances released into the blood that cause activation or inhibition of macrophages, destroy target cells, or are chemotactic for the various types of leukocytes. The CD4 cells called helper T cells help B lymphocytes recognize certain antigens. Amplifier T lymphocytes are CD8 cells that enhance the activity of cytotoxic T cells. Suppressor T cells are CD8 cells that suppress antibody synthesis by their action on helper cells and B lymphocytes.
Miller-Keane Encyclopedia and Dictionary of Medicine, Nursing, and Allied Health, Seventh Edition. © 2003 by Saunders, an imprint of Elsevier, Inc. All rights reserved.

(lim'fō-sīt),
A white blood cell formed in bone marrow and distributed throughout the body in lymphatic tissue (for example, lymph nodes, spleen, thymus, tonsils, Peyer patches), where it undergoes proliferation. In normal adults, lymphocytes make up 22-28% of the total number of leukocytes in the circulating blood. Lymphocytes generally are small (7-8 mcm), although larger forms (10-20 mcm) occur frequently. With Wright or similar stain, the nucleus is colored a deep purple-blue and is composed of dense aggregates of chromatin within a sharply defined nuclear membrane; the nucleus usually is round but may be slightly indented, and is eccentrically situated within a relatively small amount of light-blue cytoplasm that ordinarily contains no granules; especially in larger forms, the cytoplasm may be fairly abundant and include several fine granules of bright red-violet; unlike granules of the myeloid series of cells, those in lymphocytes do not yield a positive oxidase or perioxidase reaction. Lymphocytes are divided into two principal groups, T and B cells, based on their function and on characteristics of their surface molecules. Null cells, which include natural killer cells, represent a small percentage of the lymphocyte population.
Synonym(s): lymph cell, lympholeukocyte
[lympho- + G. kytos, call]
Farlex Partner Medical Dictionary © Farlex 2012

(lĭm′fə-sīt′)
n.
Any of the nearly colorless cells found in the blood, lymph, and lymphoid tissues, constituting approximately 25 percent of white blood cells in humans and including B cells, which function in humoral immunity, and T cells, which function in cellular immunity.
lym′pho·cyt′ic (-sĭt′ĭk) adj.
The American Heritage® Medical Dictionary Copyright © 2007, 2004 by Houghton Mifflin Company. Published by Houghton Mifflin Company. All rights reserved.

(lim'fŏ-sīt)
A white blood cell formed in lymphatic tissue throughout the body (e.g., lymph nodes, spleen, thymus, tonsils, Peyer patches) from precursor cells originating in bone marrow and in normal adults making up approximately 22-28% of the total number of leukocytes in the circulating blood. Lymphocytes are generally small (7-8 mcm), but larger forms are common (10-20 mcm); with Wright (or a similar) stain, the nucleus is deeply colored (purple-blue), and is composed of dense aggregates of chromatin within a sharply defined nuclear membrane; the nucleus is usually round, but may be slightly indented, and is eccentrically situated within a relatively small amount of light blue cytoplasm that ordinarily contains no granules; especially in larger forms, the cytoplasm may be fairly abundant and may include several fine, bright red-violet granules; in contrast to granules of the myeloid series of cells, those in lymphocytes do not yield a positive oxidase or peroxidase reaction. Lymphocytes are divided into two principal groups, T cells and B cells, based on their surface molecules as well as their function. Natural killer cells, which are large granular lymphocytes, represent a small percentage of the lymphocyte population.
[lympho- + G. kytos, call]
Medical Dictionary for the Health Professions and Nursing © Farlex 2012

a type of LEUCOCYTE (white blood cell) of the AGRANULOCYTE group which is formed in the bone marrow from which they differentiate into either B CELLS or T-CELLS. The typical size is about the same as a red blood cell (about 8 μm in diameter). Lymphocytes are not themselves motile, but are capable of destroying foreign ANTIGENS in the IMMUNE RESPONSE, collecting in the spleen and lymph nodes which may become swollen in a severe attack. The two types of lymphocyte react in different ways, T-cells destroying the antigen themselves (cell-mediated immunity) while B-cells produce ANTIBODIES.
Collins Dictionary of Biology, 3rd ed. © W. G. Hale, V. A. Saunders, J. P. Margham 2005

A type of white blood cell that is important in the formation of antibodies. Doctors can monitor the health of AIDS patients by measuring the number or proportion of certain types of lymphocytes in the patient's blood.
Mentioned in: AIDS, AIDS Tests, Immunosuppressant Drugs, Lymphocytopenia, Severe Combined Immunodeficiency, Sore Throat, Thymoma, Tissue Typing, White Blood Cell Count and Differential
Gale Encyclopedia of Medicine. Copyright 2008 The Gale Group, Inc. All rights reserved.

A. Combination chemotherapy. St. Jude Children's Research Hospital has reported a 5-year-survival rate of more than 90 percent for acute lymphoblastic leukemia (ALL)- on adults it's a bit lower but still a remarkable success. About the hospital- it depends where you do you live I guess…
More discussions about Lymphocyte
This content is provided by iMedix and is subject to iMedix Terms. The Questions and Answers are not endorsed or recommended and are made available by patients, not doctors.