[lim-fat´ik]
1. pertaining to lymph or to a lymphatic vessel.
2. a lymphatic vessel.
lymphatic ducts the two large vessels into which all lymphatic vessels converge. The right lymphatic duct joins the venous system at the junction of the right internal jugular and subclavian veins and carries lymph from the upper right side of the body. The left lymphatic duct, or thoracic duct, enters the circulatory system at the junction of the left internal jugular and subclavian veins; it returns lymph from the upper left side of the body and from below the diaphragm.
lymphatic system the lymphatic vessels and lymphoid tissues considered collectively. (See also circulatory system.) Several diseases affect the lymphatic system. lymphogranuloma venereum is a viral disease that attacks lymph nodes in the groin and usually is transmitted by sexual contact. lymphadenitis is an inflammation of the lymph nodes, particularly in the neck; swollen tonsils is an example. Generalized lymphadenitis can be a symptom of the secondary stage of syphilis. Cancer attacks the lymphatic system, as it does other systems of the body; a tumor of the lymphoid tissue is known as a lymphoma. The general term lymphosarcoma refers to malignant neoplastic disorders of lymphoid tissue. 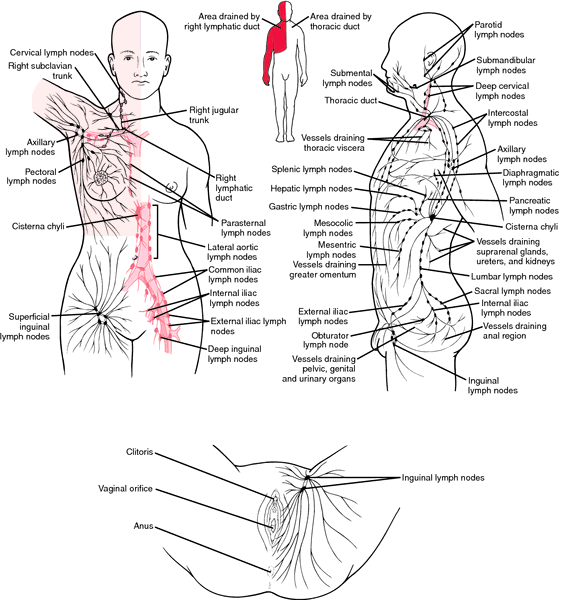 Diagrammatic representation of lymphatic drainage of various parts of the body. From Dorland's, 2000.

(lim-fat'ik),
1. Pertaining to lymph.
2. A vascular channel that transports lymph.
3. Sometimes used to pertain to a sluggish or phlegmatic characteristic. Synonym(s): vas lymphaticum [TA]
[L. lymphaticus, frenzied; Mod. L. use, of or for lymph]

(lĭm-făt′ĭk)
adj.
1. Anatomy Of or relating to lymph or to the nodes or vessels of the lymphatic system.
2. Archaic Lacking energy or vitality; sluggish.
n. Anatomy
A vessel that conveys lymph.
lym·phat′i·cal·ly adv.

(lim-fat'ik)
1. Pertaining to lymph.
2. A vascular channel that transports lymph.
3. Sometimes used to pertain to a sluggish or phlegmatic temperament.
[L. lymphaticus, frenzied]

Pertaining to lymph, the clear fluid that is collected from tissues, flows through special vessels, and joins the venous circulation.
Mentioned in: Bile Duct Cancer