[lows] (pl. lice)
any of various grayish, wingless insects parasitic on birds and mammals, including humans; they are usually one sixteenth to one sixth of an inch (0.15 to 0.4 cm) long. Lice are classified into two orders, Anoplura (the sucking lice) and Mallophaga (the bird lice or biting lice). The causal organisms of typhus, relapsing fever, trench fever, and other diseases are transmitted by the bites of lice. The most important species parasitic on humans are Pediculus humanus capitis, the head louse, which attaches itself to the hairs of the head; P. humanus corporis, the body or clothes louse; and Phthirus pubis, the crab louse, which lives in the pubic hair, eyelashes, and eyebrows. Endemics of head lice infestations occur most frequently in school children. Pubic lice are often sexually transmitted. Louse infestation is called pediculosis.
Miller-Keane Encyclopedia and Dictionary of Medicine, Nursing, and Allied Health, Seventh Edition. © 2003 by Saunders, an imprint of Elsevier, Inc. All rights reserved.

(lous)
n.
pl. lice (līs) Any of numerous small, flat-bodied, wingless biting or sucking insects of the order Phthiraptera, which live as external parasites on birds and mammals, including humans. The lice are sometimes classified together with the psocids in the order Psocodea.
The American Heritage® Medical Dictionary Copyright © 2007, 2004 by Houghton Mifflin Company. Published by Houghton Mifflin Company. All rights reserved.
A flat wingless parasitic insect, that may be a carrier of pathogens; its plural is lice
Segen's Medical Dictionary. © 2012 Farlex, Inc. All rights reserved. 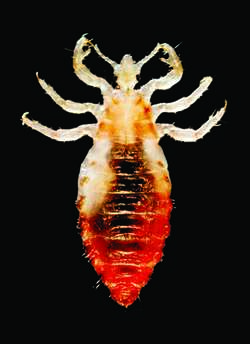