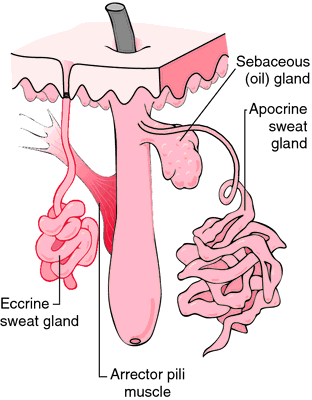 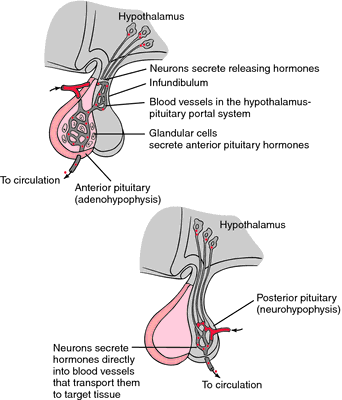 [TA]
an unpaired compound gland suspended from the base of the hypothalamus by a short extension of the infundibulum, the infundibular or pituitary stalk. The hypophysis consists of two major divisions. The first, the neurohypophysis, comprises the infundibulum and its bulbous termination, the neural part or infundibular process (posterior lobe), which is composed of neuroglialike pituicytes, blood vessels, and unmyelinated nerve fibers of the hypothalamohypophysial tract. The cell bodies of these axons reside in the supraoptic and paraventricular nuclei of the hypothalamus. These fibers convey to the lobe for storage and release the neurosecretory hormones oxytocin and antidiuretic hormone. The second division, the adenohypophysis, comprises the larger distal part, a sleevelike extension of this lobe (infundibular part) that invests the infundibular stalk, and a thin intermediate part (poorly developed in humans) between the anterior and posterior lobes; the anterior lobe consists of cords of cells of several different types interspersed on the secondary capillary bed of the hypothalamohypophysial portal system. Secretion of somatotropins, prolactin, thyroid-stimulating hormone, gonadotropins, adrenal corticotropin, and other related peptides in the adenohypophysis is regulated by releasing and inhibiting factors elaborated by neurons in the hypothalamus that are taken up by a primary plexus of capillaries in the median eminence and transported through portal vessels in the infundibular part and infundibular stem to a secondary plexus of capillaries in the distal part.
Synonym(s): hypophysis [TA], glandula pituitaria ☆ , basal gland, glandula basilaris, hypophysis cerebri, master gland
Farlex Partner Medical Dictionary © Farlex 2012

Pituitary gland Anatomy The pea-sized powerhouse at the base of the brain which orchestrates the endocrine symphony, saddled in the sella turcica and attached by a stalk to the hypothalamus–which controls pituitary function. Cf Hypothalamus.
McGraw-Hill Concise Dictionary of Modern Medicine. © 2002 by The McGraw-Hill Companies, Inc.

(hī-pof'i-sis) [TA]
An unpaired compound gland suspended from the base of the hypothalamus by a short extension of the infundibulum, the infundibular or pituitary stalk. It consists of two major subdivisions: 1) the neurohypophysis and 2) the adenohypophysis, comprising the larger distal part.
See also: hypothalamus
Synonym(s): pituitary gland.
[G. an undergrowth]
Medical Dictionary for the Health Professions and Nursing © Farlex 2012

The PITUITARY gland. From the Greek hupophusis , an attachment underneath.
Collins Dictionary of Medicine © Robert M. Youngson 2004, 2005

(hī'pō-thal'ă-mŭs) [TA]
Ventral and medial regions of diencephalon forming walls of approximately the ventral half of third ventricle; delineated from the thalamus by the hypothalamic sulcus, lying medial to the internal capsule and subthalamus, continuous with the precommissural septum anteriorly and with the mesencephalic tegmentum and central gray substance posteriorly.
[hypo- + thalamus]

(pi-tū'i-tar-ē gland) [TA]
Unpaired compound gland suspended from base of the hypothalamus by a short extension of infundibulum; the infundibular or pituitary stalk.
Synonym(s): hypophysis [TA] .
Medical Dictionary for the Dental Professions © Farlex 2012