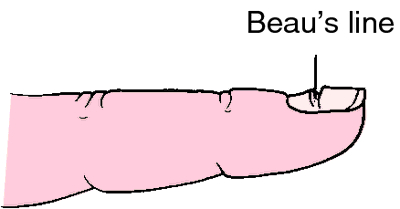 Beau's line. From Polaski and Tatro, 1996.
bismuth line a thin blue-black line along the gingival margin in bismuth poisoning.
blue line lead line.
cement line a line visible in microscopic examination of bone in cross section, marking the boundary of an osteon (haversian system).
cervical line anatomical designation for the cementoenamel junction.
cleavage l's Langer's lines.
line of Douglas a crescentic line marking the termination of the posterior layer of the sheath of the rectus abdominis muscle.
l's of election lines of expression.
epiphyseal line one on the surface of an adult long bone, marking the junction of the epiphysis and diaphysis.
l's of expression the natural skin lines and creases of the face and neck; the preferred lines of incision in facial and cervical surgery.
gingival line
1. a line determined by the level to which the gingiva extends on a tooth; called also gum line.
2. any linear mark visible on the surface of the gingiva.
gluteal line any of the three rough curved lines (anterior, inferior, and posterior) on the gluteal surface of the ala of the ilium.
gum line gingival line (def. 1).
hot line see hot line.
iliopectineal line the ridge on the ilium and pubes showing the brim of the true pelvis.
incremental l's lines supposedly showing the successive layers deposited in a tissue, as in the tooth enamel.
intertrochanteric line one running obliquely from the greater to the lesser trochanter on the anterior surface of the femur.
Langer's l's linear clefts in the skin indicative of the direction of the fibers; they correspond closely to the creases of the body but vary with body configuration. Lines of incision made parallel to them are thought to heal more efficiently. Called also cleavage lines.
lead line a purple-blue line at the edge of the gums in chronic lead poisoning; called also blue line.
lip line a line on the teeth at the level to which the margin of either lip extends.
median line an imaginary vertical line dividing the body equally into right and left parts.
milk line the line of thickened epithelium in the embryo along which the mammary glands are developed.
mylohyoid line a ridge on the inner surface of the lower jaw from the base of the symphysis to the ascending rami behind the last molar tooth.
nuchal l's three lines (inferior, superior, and highest) on the outer surface of the occipital bone.
pectinate line one marking the junction of the zone of the anal canal lined with stratified squamous epithelium and the zone lined with columnar epithelium.
semilunar line a curved line along the lateral border of each rectus abdominis muscle, marking the meeting of the aponeuroses of the internal oblique and transverse abdominal muscles.
Shenton's line a curved line seen in radiographs of the normal hip, formed by the top of the obturator foramen; it is used to determine the relationship between the head of the femur and the acetabulum.
temporal l's curved ridges, inferior and superior, on the external surface of the parietal bone, continuous with the temporal line of the frontal bone, a ridge that extends upward and backward from the zygomatic process of the frontal bone.
terminal line one on the inner surface of each pelvic bone, from the sacroiliac joint to the iliopubic eminence anteriorly, separating the false from the true pelvis.
visual line a line from the point of vision of the retina to the object of vision; called also visual axis.

(līn), [TA]
1. A mark, strip, or streak.
See also: linea.
2. anatomy a long, narrow mark, strip, or streak distinguished from the adjacent tissues by color, texture, or elevation.
See also: linea.
3. A unit of measurement used by histologists in the 19th century; it varied in different countries from one tenth to one twelfth of an English inch.
4. A laboratory derivative of a stock of organisms maintained under defined physical conditions.
5. A section of tubing supplying fluid or wire conducting impulses for monitoring equipment; for example, intravenous line, arterial line, electric line.
Synonym(s): linea [TA]
[L. linea, a linen thread, a string, line, fr. linum, flax]

(līn)
1. A long, narrow mark or a strand of material.
2. anatomy Any linear mark or streak distinguished from adjacent tissues by color, texture, or elevation.
3. A strain of cells or organisms derived from a single ancestor or precursor.
4. A section of tubing supplying fluid or conducting impulses for monitoring equipment (e.g., intravenous line, arterial line).
Synonym(s): linea [TA] .
[L. linea, a linen thread, a string, line, fr. linum, flax]

a subpopulation with certain characteristics in common. Thus a population of insects might be divided into several lines, depending on their tolerance to insecticides, and each line may be further inbred.

1. The connection between two points. 2. In anatomy, a long narrow band or streak that is distinct from the surrounding tissues by colour or texture.
base line The line joining the centres of rotation of the two eyes. It is approximately equal to the interpupillary distance (Fig. L20). See interocular distance.
demand line The line in Donders' diagram that represents the perfect amount of convergence required for each level of accommodation, for single binocular vision. Syn. orthophoria line; Donders' line.
line of direction Line joining an object in space with its image on the retina (allowing for the optical properties of the eye). The line joining the fixation point to the fovea is called the principal line of direction. However, the object appears to lie along a visual direction and that direction in visual space associated with the fovea is called the principal visual direction. All other visual directions associated with other retinal points are called secondary visual directions. The principal line of direction and the principal visual direction coincide, but the former indicates the direction towards the eye, while the latter indicates the direction away from the eye. See law of identical visual directions.
Donders' line See demand line.
Egger's line See ligament of Wieger.
Ferry's line A line containing iron located in the corneal epithelium and adjacent to limbal filtering blebs. It may occur as a result of trabeculectomy.
line of fixation See fixation axis.
Fleischer's line See Fleischer's ring.
focal line Any astigmatic optical system produces two mutually, usually perpendicular, focal lines of a point object. The focal lines are situated at different image distances. Each focal line lies parallel to its associated cylinder axis. Syn. image line; line focus; Sturm's line. See circle of least confusion; conoid of Sturm; interval of Sturm.
line focus See focal line.
Fraunhofer's line's Fine dark lines distributed throughout the length of the solar spectrum due to the absorption of specific wavelengths by elements in the atmosphere of the sun and the earth. Fraunhofer observed about 600 of these lines and denoted the most prominent ones by letters from A in the extreme red to K in the violet. Examples: A corresponds to 759.4 nm, C to 656.3 nm, D to 589.3 nm, F to 486.1 nm, etc. See constringence; solar spectrum.
line of Gennari A distinctive white stripe in the middle of the fourth layer of the visual cortex containing the termination of the optic radiation fibres, as well as intracortical connections. The stripe appears above and below the calcarine fissure except in the most anterior part of the fissure where it only appears below. Syn. area striata; stria of Gennari. See visual area; calcarine fissure.
Hudson-Stähli line A yellowish-brown, more or less horizontal line containing iron which runs across the cornea below the centre. It occurs in normal corneas, more frequently in the elderly, or in association with corneal opacities.
iron line Deposits of iron within the corneal epithelium appearing as a brown rust line. They often subside with time leaving a nebulous scar. Several eponymous types have been described depending on the cause and location. See Hudson-Stähli line; Stocker's line; Coat's white ring; Fleischer's ring; siderosis bulbi.
median line Line formed by the intersection of the median plane and the plane of regard (Fig. L20). Syn. midline.
orthophoria line See demand line.
phoria line On Donders' diagram, it is the line joining all the points representing the passive position of the eyes corresponding to various levels of accommodation.
principal line of vision See line of sight.
pupillary line See pupillary axis.
retinal line Operationally, the collection of retinal elements that are activated in response to a line stimulus.
Sampaolesi's line A pigmented, wavy line anterior to Schwalbe's ring and found mainly in the periphery of the inferior cornea. It may be noted with gonioscopy in pigmentary dispersion syndrome and pseudoexfoliation syndrome.
line of Schwalbe See anterior limiting ring of Schwalbe.
line of sight Line joining the point of fixation to the centre of the entrance pupil. This line is more practical than the visual axis. Syn. principal line of vision.
line spectrum See line spectrum.
Stocker's line An abnormal line containing iron located in the corneal epithelium which may appear in front of the advancing edge of a pterygium.
Sturm's line See focal line.
visual line See visual axis. 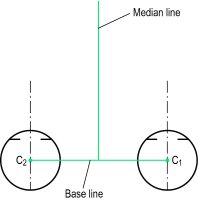 Q. My vision is blurry and I see zigzag lines, what is it from? Every now and again, usually after sitting a few hours in front of the computer or not sleeping enough at night, I start getting blurry vision. I see zigzag lines in front of my eyes and it can take sometimes an hour to go away. What is this from?

A. It sounds like you have a migraine. A migraine that comes with blurry vision and zigzags (an aura) is called a classic migraine. The aura of migraine typically lasts from 20 minutes to an hour. Some patients have prolonged aura symptoms that can last hours to days. The aura also typically ends before the headache itself begins. When migraine aura symptoms are prolonged or last into or through the headache phase these types of migraine are commonly referred to as complicated migraines.

Q. can i get lung cancer from second hand smoking? what is the red line amount? how long do i need to expose to a smoking environment before i risk lung cancer ?

A. Yes, second hand (or passive) smoking is indeed a risk factor for lung cancer. How much? It depends both on the environment of the passive smoking (e.g. to how many smokers one is exposed) and on genetic factors. Don't know about threshold, but it seems that the more you avoid it the better.
More discussions about line