[grid]
1. a grating.
2. in radiology, a device consisting essentially of a series of narrow lead strips closely spaced on their edges and separated by spacers of low density material; used to reduce the amount of scattered radiation reaching the x-ray film.
3. a chart with horizontal and perpendicular lines for plotting curves.
Amsler grid see Amsler charts.
baby grid a direct-reading chart on infant growth.
cross-hatched grid two linear grids that are superimposed at right angles to each other, used for maximal scatter cleanup. 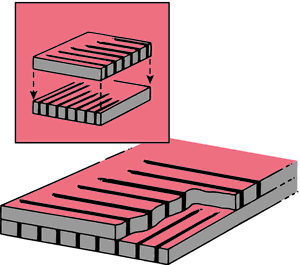 Cross-hatched grids are fabricated by sandwiching two linear grids together so that their grid strips are perpendicular. From Bushong, 2001.
grid cutoff differences in radiographic intensity that are caused by improper focusing of the lead lines of a grid.
focused grid a linear grid in which all of the lead strips are aligned in a tilted fashion toward a centering point.
linear grid a grid designed to permit the passage of the primary beam by having lead lines aligned in the same direction separated by radiolucent interspacing material. There are two types, parallel and focused.
Wetzel grid a direct-reading chart for evaluating physical fitness in terms of body build, developmental level, and basal metabolism.

Feedback
Flashcards & Bookmarks ?
Please log in or register to use Flashcards and Bookmarks. You can also log in with
Flashcards ?
My bookmarks ?
+ Add current page to bookmarks
TheFreeDictionary presents:
Write what you mean clearly and correctly.
Mentioned in ?
References in periodicals archive ?
Several manufacturers' graphs showing low-voltage characteristics generally have linear grids with current plotted vertically and voltage horizontally.
In search of the zero-ohm load
A two-way linear grid search was used to minimize the error sum of squares between simulated and observed maturity.
Developing Genetic Coefficients for Crop Simulation Models with Data from Crop Performance Trials
The lines of bare bulbs in the studio echo Manet's globular lamps in a perfect diagram of Albertian perspective, and the window frames with the two symmetrical lamp standards chart the artist's translation of depth into a functional linear grid (that being the stable order permitting Manet's multiple violations of unified illusion).
Profane illuminations: social history and the art of Jeff Wall