[trans-doo´ser]
a device that translates one physical quantity to another, e.g., pressure or temperature, to an electrical signal.
neuroendocrine transducer a neuron, such as a neurohypophyseal neuron, that on stimulation secretes a hormone, thereby translating neural information into hormonal information.
pressure transducer an electronic device that converts pressure (such as blood pressure) into electrical signals that can be recorded graphically and monitored.
Miller-Keane Encyclopedia and Dictionary of Medicine, Nursing, and Allied Health, Seventh Edition. © 2003 by Saunders, an imprint of Elsevier, Inc. All rights reserved.

(tranz-dū'sĕr),
A device designed to convert energy from one form to another.
See also: transduction.
Farlex Partner Medical Dictionary © Farlex 2012

Instrumentation A device that transforms one form of energy to another–eg, a photocell that converts light into electrical energy; it is the major component in ultrasonographic devices, and contains an emitting and receiving piezoelectric crystal
McGraw-Hill Concise Dictionary of Modern Medicine. © 2002 by The McGraw-Hill Companies, Inc.

(trans-dū'sĕr)
A device that converts energy from one form to another (e.g., from electrical energy into ultrasonic energy).
Medical Dictionary for the Health Professions and Nursing © Farlex 2012 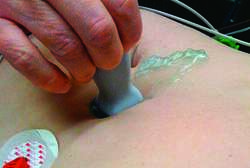 (trans-dū'sĕr)
A device that converts energy from one form to another.
Medical Dictionary for the Dental Professions © Farlex 2012

Feedback
Flashcards & Bookmarks ?
Please log in or register to use Flashcards and Bookmarks. You can also log in with
Flashcards ?
My bookmarks ?
+ Add current page to bookmarks
Mentioned in ?
References in periodicals archive ?
In conclusion, this study reports the effectiveness of a protocol used in our institution to process the linear array transducer and ultrasound system that is used for peripherally invasive single-shot ultrasound-guided nerve blocks.
Over a four-week period, 120 swabs were taken from multiple sites on our ultrasound machines and linear array transducers for microbial culture.
Decontamination of ultrasound equipment used for peripheral ultrasound-guided regional anaesthesia
Transducer options include an adult phase-array transducer for cardiac applications, a curved array transducer for abdominal and obstetrical (OB) scanning; a linear array transducer for imaging of the breast, small body parts, and nerves, as well as vascular intima-media thickness (IMT) measurement; an intracavitary transducer for OB and gynecologic (GYN) examinations; and a transesophageal probe for transesophageal echocardiography scanning.
New handheld US system from SonoSite