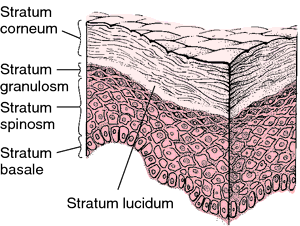 Feedback
Flashcards & Bookmarks ?
Please log in or register to use Flashcards and Bookmarks. You can also log in with
Flashcards ?
My bookmarks ?
+ Add current page to bookmarks
Mentioned in ?
References in periodicals archive ?
* A second-degree burn damages the top two layers of skin. The second layer contains the nerve endings.
Ask Doctor Cory
The damage to deeper layers of skin can remain and lead to the development of skin cancer in the future.
Bid to kick skin cancer into touch
There were layers of skin coming off and his skin was blistering very badly."
Baby's bath agony
To reduce the depth of stretch mark scars, doctors can employ surgical procedures that scrape or peel off layers of skin. For example, microder-mabrasion blasts away the top layers of the skin with fine, sand-like particles.
Stretchy subject. (Alternative Paths)
Adam Singer of University Hospital, Stony Brook, N.Y., noted in an editorial that the technique closes only the outermost layers of skin and is not effective for bleeding wounds.
HAT trick. (Indications)
The next time you're packed into a sweaty dance club, gyrating with hundreds of men--or watching the action in Queer as Folk's fantasy club Babylon--look around and absorb what's really going on beneath the pounding music and layers of skin and sex.
It's a wonderful life: author David Nimmons shares his vision of the community he believes we can be--and already are. (books)
"He was shaking like a leaf and layers of skin were coming off him."
Toddler suffers horrific burns from hot fat
Named after the scruffy Blackadder star, Baldrick the Bulldog had just too many layers of skin around his neck - causing him to itch and scratch.
BALDRICK SET FOR FACELIFT BEAUTIFUL
Typically, a minor cut damages two layers of skin. The outermost layer, the epidermis, is a network of cells that form a paperthin barrier against germs.
Spray-on Skin
Necrotizing fasciitis: A serious but rare infection (fascia) of the deeper layers of skin and fatty subcutaneous tissues.
Group A Streptococcal Infections
The [CO.sub.2] laser offers the benefits of healing deeper layers of skin tissue, virtually no bleeding at the treatment sites, and a relatively short procedure time.
REJUVENATION TECHNIQUES
It's vital that the new layers of skin are not exposed to sunlight until they have formed, and patients wear a mask of silk dressings for the first 48 hours.
I am 82...but after the miracle mask I look 20 years younger